In the 5K and 10K races of the Iowa Senior Olympics, eighty-something Bill Beal matched the performance of participants in the 60-64 and 65-69 age group.

According to Senior Olympics executive director Dan Lake, Bill “entered six of the most grueling events and won medals in five of them. These were the sprints, dashes, runs, and cycling. Most noteworthy were his times in the five-kilometer and ten-kilometer bicycle races since they were close to participants in the 60-64 and 65-69 age groups.”

“It was a great adventure,” Bill says. “I have been training steadily for the past six years as part of my recovery program from severe arthritis. I was walking with a cane and taking ibuprofen to ease the pain. I felt if I couldn’t pull out of this, my life was over. I had no confidence in the drugs offered by the pharmaceutical industry.”

So Bill designed his own arthritis relief program based on the idea that our bodies are marvelous machines capable of healing almost any wound and defeating any germ, bug, or virus that invades it.

In the course of his research Bill discovered that in our society today chronic diseases such as arthritis have grown to epidemic levels. Having successfully overcome his own arthritis, Bill offers some possible solutions.

• Our foods are lacking in the basic vitamins and minerals we need to be strong because they are grown on depleted soils. Grains and sugars are refined to make them white until there is no value left in them. The solution is to eat fresh, locally grown organic produce and whole grains.

• Poisons added to our foods are overwhelming our bodies’ ability to heal. Avoid most of the processed, packaged foods you find on supermarket shelves.

• Most of us drive a car to and from work, sit at a desk all day, and lounge in front of the TV in the evening. The result is our bodies are too weak to perform as they were designed to do. Get up. Get out. Get going! Create your own fun exercise program.

Bill concludes, “The Iowa Senior Olympics was the ultimate answer for 700 of us this year. It provides motivation and encouragement to take responsibility for our own bodies.” And Bill himself is surely an inspiration for everyone to take charge of their own health and fitness. 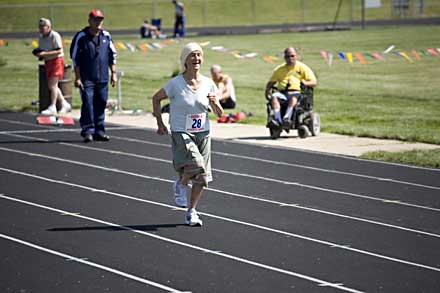 Dorothy Beal surprised everyone (including herself) by entering the 100-meter race at the last minute.

Venus & Mars at the Races: The Beals Tell Their Story

Bill Beal: My wife Dorothy and I have had some really great battles, but I love her dearly. You see, she is a liberal Democrat, a dewy-eyed lover, and thinks competition is a dirty word. I’m at the other end of the spectrum—a conservative Republican who thinks competition is the spice of life.

It all came together for us at the Iowa Senior Olympics on June 9th. I went up there to win some medals, and I did, but then realized that the fun I was having with these active, healthy elders was actually the greater experience. The joy in the atmosphere was supreme.

Dorothy came up to observe, certainly not to participate. Yet, she became so caught up in the excitement that when I came out after my run I couldn’t find her.
She was down on the track, about to run the 100-meter race. While the other women were wearing Spandex tights or running shorts and bras, Dorothy was in her long peasant skirt with a bandanna on her head. What a sight she made. Soon she was running along with a big smile on her face, expressing her joy.

Dorothy Beal: Bill heard about the Senior Olympics last fall. “Come on, babe, let’s do it,” he said. Competition, ugh. People trying to beat out other people. No, I don’t want to. Bill’s involvement in RAGBRAI two years ago had been different. Ten thousand people biking together just for the fun of it.

So Bill went ahead. Running, running, timing himself, and running again. As he started training on his old bicycle with the fat tires and heavy frame, he realized that if he was to do well, he would have to get a lightweight racing bike. He did, but that caused new problems of balance, low posture with the head tilted up, and new muscles to be strengthened. In the usual Beal fashion, he persisted and went on to set a new record for the 80 to 84 age group on June 10th.

He researched the Senior Olympics’ records and discovered that no one older than 69 had ever run in the 10-kilometer race. And no wonder. That is six and two tenths miles, and I began a new level of worrying. As the time drew near, I was asked to stay home. “Otherwise you will be worrying about me too much,” he said. He ran it and is in the record book as the only guy in his age group to have done it in the 19 years of the ISO. To my great surprise, when he returned he looked absolutely fine.

Now we are both looking forward to next year in the Iowa Senior Olympics.

GI Jonathan: A Mother Contemplates Her Son's Decision to Enlist