A wise person (my wife) once said each of us has an Indiana Jones inside trying to get out. Perhaps that is why the show at ICON Gallery in Fairfield—The Legendary Dodge Truck and the Arabian Expedition (June 1 –July 21, 2007)—is so appealing.

It chronicles the exploits of a hardy group of archaeologists and explorers who set off in 1950 from the British protectorate of Aden (now the Republic of Aden) in search of lost civilizations. Their aim was to excavate ancient cities along the famed spice routes that crossed the deserts of South Arabia, some of them stretching far back in time to the days of Abraham. In particular, they sought the Temple of the Moon built by the legendary Queen of Sheba at Marib.

The expedition, the first of four organized in that region by the American Foundation for the Study of Man, included world-famous archaeological scholar Professor William F. Albright and was headed up by a fearless young explorer named Wendell Phillips, who was fresh from his success traversing the African continent from Cairo to Capetown. Many believe Phillips to be a role model for Harrison Ford’s dashing archaeologist hero in the Indiana Jones film series, right down to the enormous six-shooter low-riding on his hip.

Shunning camels, the traditional form of transport in this harsh desert environment, the expedition chose to use instead 18 custom-designed Dodge Power Wagons that Phillips had somehow persuaded the Chairman of the Chrysler Corporation to donate. Developed during the Second World War to transport American troops as far apart as Africa and the Philippines, these monuments to the heyday of American auto manufacturing (more steel, please) became the staple truck for the American workingman after the war and were in continuous production (and almost unchanged in design) for 33 years. Goodyear created special tires for the vehicles and Colt and Remington donated plenty of firepower for the team members to protect themselves.

Phillips and his team took their Dodge Power Wagons over rugged mountains, monster dunes (the largest dune they encountered was almost 900 feet high), and almost impassable riverbeds. They visited places no American or even European had ever set pith helmet in before. In between excavating ancient cities from the sand, befriending blue-faced Indigo Warriors, and dealing with intense extremes of temperature, they got to sample local delicacies such as goat’s eyeballs (they taste like chicken, don’t they?), goat brains, and live crickets. Fortunately, they compensated by taking along plenty of supplies of Post Toasties and Jell-O to supplement their diet.

Firearms were in abundance, both for self-defense and entertainment. George Farrier, now in his seventies, and the Motor Transport Specialist on the first expedition and Field Director on subsequent trips, remembers every afternoon being spent in target practice, the locals often joining in with antiquated breech loading rifles.

He also recalls once giving an inexpensive necklace to one of the local children. Her father immediately offered him the 12-year-old girl’s hand in marriage. Having just gotten engaged, he was wondering how to explain this new development to his fiancé. As etiquette required he be given something in return for his kindness, he was fortunate to escape with a ceremonial dagger instead.

Phillips recounted his daring exploits in his book, Qataban and Sheba: Exploring the Ancient Kingdoms on the Ancient Spice Routes of Arabia (unfortunately now out of print). He opens his author’s preface with the words: “Herein lies the story of a dream, which like many dreams occasionally achieved nightmarish qualities,” and warns his readers “…to whom romance, adventure, science, travel and the lure of the unknown beckon that the fulfillment of their dreams may also bring upon them the torture of split lips, swollen tongues, frozen fingers, dysentery, fever, heartbreak, and monotony beyond compare,” which may be enough to put off a few future would-be Indiana Joneses. One particularly quaint custom Phillips describes encountering on their trip to Bir Asakir was the greeting of strangers by firing guns at them. Apparently, the more you were appreciated the closer the bullet flew. (Goodness knows what happened if they really liked you!) 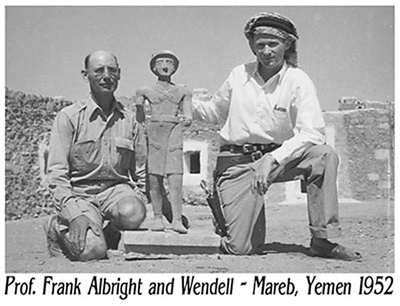 The ICON show features photographs, artifacts, and memorabilia from the four expeditions, including wooden models of the Power Wagons made by George Farrier, who will be a guest speaker at ICON gallery on the night of the June 1st art walk and will sign copies of his two books, Power Wagons in the Desert and Arabian Power Wagon Expedition. The highlight of the show will be daily showings of a rare documentary film (also named Qataban and Sheba: Exploring the Ancient Kingdoms on the Ancient Spice Routes of Arabia) discovered in the Foundation archives and the only surviving recording of Wendell Phillips talking about his exploits.

Along with the photographs and artifacts from the Arabian expeditions, Bill Teeple, the director of ICON gallery, has created a remarkable show of photographs, models, advertisements, brochures, magazines, and other materials chronicling the history of Dodge Power Wagons from 1940 to 1971. Much of the work transcends the field of commercial design to become fine art pieces, classic examples of mid-century Americana, bold, colorful, and dramatic in their conception.

The material on exhibition is from the collection of Dave Butler, President and Founder of Fairfield-based Vintage Power Wagons, Inc. Butler bought his first Power Wagon in 1975. After running up 275,000 miles, he couldn’t find the parts he needed to fix it, so he decided to do it himself. Later on he bought a Toyota Land Cruiser, but was so disappointed in its performance that he traded it in for another Power Wagon. The rest, as they say, is history. Butler built his company into the world’s leading supplier of Power Wagons. The company sponsors the four-day Vintage Power Wagon rally, which is the biggest in the country and is a celebration of all that is great about Power Wagons. The rally includes moonlight trail rides, parades, road rallies, banquets, barbecues, and, to quote their literature, “lots of great people with great trucks.”

How did the Power Wagons fare in Arabia? Remarkably well, as it turned out. George Farrier recounts there was “not a single problem with a Power Wagon the whole time. No breakdowns. No flat tires. Nothing.”

On their second expedition, Phillips and his party located and partially excavated the Queen of Sheba’s famed Temple of the Moon, including five 30-foot carved stone columns that graced the entrance and had been completely covered in sand for centuries. In the process they discovered gold jewelry and pottery worth millions of dollars at today’s prices, invaluable material for any museum’s collection.

Unfortunately, they had omitted to gain the blessing of the local warlords for their enterprise. Upon discovering a price had been placed on Phillips’s head, the party hastily decamped one night crammed into two of the Power Wagons, leaving behind at least five other vehicles, most of their supplies, and all the ancient artifacts they had uncovered. Pursued by the bellicose tribesman on horseback, the team made it out by the skin of their teeth. In typical fashion, Phillips rode out cowboy-style on the front fender of the lead vehicle, a six-shooter in each hand, “just in case some close fighting was required.”

Somewhere, out in the deserts of southern Arabia, are several perfect specimens of Detroit’s finest.

In a final postscript, Phillips’s sister, Merilyn, the current President of the American Foundation for the Study of Man, along with George Farrier, returned to the Temple of the Moon in 2001 on the 50th anniversary of their first expedition and again in 2004 to inspect and photograph the site. Plans are currently under way, in cooperation with the government of Yemen, to completely restore the temple and open it to visitors. Curious Yemeni tourists are already starting to show up, an unusual occurrence since rarely is anything pre-Islamic in origin given much attention in their culture.

Tony Ellis is a Fairfield-based writer and poet.

David Dunlap, Jun 05 | Dunlap's Art is to Art as a Coral Reef is to Architecture