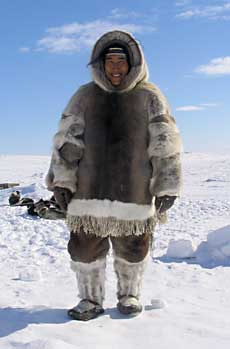 As our small turboprop scrapes through the endless sky 200 miles above the Arctic Circle near Baffin Island, I track the plane’s shadow, a tiny speck skittering across the sea ice below. Suddenly, we lurch to the right, and I grasp the seat in front of me, bracing for our descent into Igloolik and the adventure of a lifetime.

My pulse quickens as I remember what awaits me—wind-chill factors of minus 40 F. and a three-hour snowmobile ride back across the sea ice to Siuraajuk, a remote outpost camp 44 miles from the nearest settlement.

There, I will join 48-year-old Inuit filmmaker Zacharias Kunuk and the cast and crew of his latest film production, The Journals of Knud Rasmussen, for the final two weeks of a two-month shoot. I have come to write a behind-the-scenes story about Kunuk’s approach to filmmaking for Above & Beyond, an in-flight magazine. In the process, I hope to learn firsthand how the Inuit have managed to thrive for millennia in one of the most inhospitable environments on earth.

But first, I have to layer on my expedition gear, hastily gathered in the week since I received the assignment. I put on piles of long johns, socks, fleece pants, wind-proof snow pants, turtlenecks, sweaters, a down vest, and an expedition-weight down parka. My already-too-generous girth doubles, and the extras—snow boots, hats, mitts, hiking sticks, camera, fanny pack with my passport and other essentials—add even more weight.

I begin to sweat, feeling more like a blimp on steroids than an intrepid journalist.

How will I manage the harsh conditions at Siuraajuk and get my story?

The same question flickered in my editor’s eyes when we first discussed the assignment, but I had dismissed it, assuring him I had camped and canoed all my life. I had even taken a ten-day Arctic canoe trip with a small group five years earlier. Of course, I neglected to mention I was in better shape then, and that was July, not early May.

After stalling for several weeks, he finally relented, perhaps out of desperation; he wanted the scoop and lacked other viable options, especially since the director had invited me to visit the set after I’d published a previous piece about his work.

Kunuk’s first feature film, Atanarjuat: the Fast Runner, had won the 2001 Camera d’Or at Cannes and a slew of other international awards, so naturally film buffs eagerly awaited his new film. In fact, London’s Daily Telegraph had assigned film critic S. F. Said to cover the entire shoot, and several other journalists from Canada and France had already made brief visits to the set before the production moved to Siuraajuk.

Now it’s my turn. But before I can venture out onto the sea ice, I must endure the intense scrutiny of Pauloosie Qulitalik, a robust Inuit elder in charge of the film company’s daily shipment of supplies to the camp. He quickly decides I need even more clothing for the rugged trip to Siuraajuk. He rattles off instructions in Inuktitut, and two men scurry away to fetch caribou-skin mitts, a rabbit-skin hat, plus another bulky parka to layer over mine. My legs almost buckle under the added weight.

But within an hour, I have fantasies of naming Qulitalik in my will.

With his help, I hoist myself onto the back of a snowmobile behind Laurencie, a hulking film crew member Qulitalik has assigned as my driver. Soon we are hurtling over the rough sea ice. With the brilliant spring light, I had imagined savoring glorious vistas of the Foxe Basin during the trip. Instead, my glasses ice over and the glacial wind cuts through my neoprene face mask. I tighten my grip around Laurencie’s waist and duck down to escape the wind, nuzzling into his broad back.

It is rough going, but after a couple of rest stops and our rescue of a community elder stranded by a broken snowmobile, we finally spot a cluster of grey dots on the horizon. Is it a mirage? Drawing closer, we see two small plywood cabins and a group of military-style gray tents for the cast and crew, surrounded by white tents housing families from the community.

Laurencie pulls up beside one of the cabins. Kunuk and his longtime business partner, Norman Cohn, co-director of the film, come out to welcome me. Qulitalik arrives moments later and assigns me the bottom bunk in a nearby tent. My roommates include three men—two French Canadians and a Dane—and a local Inuit woman.

After joining others for macaroni and cheese in the dining tent, I accept an offer from Alex, a handyman in his 30s, to help me maneuver the icy trail to my tent. There, I remove my parka and boots, collapse into bed beside a small gas heater, and fall asleep instantly.

Around 10 the next morning, I awaken to find a silent camp. During spring and summer, when the sun never sets, Inuit prefer to stay up all night and sleep during the day. The filmmakers take advantage of this by filming until midnight, when everyone is alert and the sky is filled with luscious shades of pastel.

Glancing around the tent, I notice “Berda,” a Sony high-definition digital video camera, near the heater. She is not rated for these conditions and has iced up several times, stopping production. Felix, the assistant cameraman, has vowed to keep her warm.

I find it hard to imagine that every piece of recording equipment, every sheet of plywood, every heater, every slice of bread has been painstakingly carried by snowmobile and qamutiq (sled) over the sea ice to this small oasis. Most filmmakers would opt for locations in southern Canada or construct a styrofoam facsimile in their studios. But Kunuk—despite the inherent hardships and exorbitant expense involved—insists on filming in the Arctic for authenticity’s sake.
Not everyone can take it. A week earlier, the cook and the unit manager, both French Canadians, had suddenly quit and abandoned the camp, frustrated by what they regarded as a lax attitude among Inuit about schedules, coupled with the unexpected numbers of family members who showed up at Siuraajuk—twice the original estimate.

When told of the men’s departure, Kunuk said quietly, “It’s a Qallunaat (Caucasian) thing to quit your job. In Inuit society, there is no quitting. It’s commitment, teamwork.”

Without the men to organize food, logistics, transport, and accommodations, how would the group survive in the middle of nowhere?

As they have done for thousands of years, the Inuit adapted to this hardship by banding together. Two elders stepped forward to run the camp. Younger men offered to hunt wild game, women cooked, and others pitched in to repair and fill heaters, clean the two toilet stalls, and do anything else the camp needed. Soon, there were smiles all around, as the camp adopted a relaxed, Inuit-style rhythm.

Of the genial, cooperative mood in camp and on the set, S. F. Said of the Daily Telegraph says, “It’s as far removed from the world of monstrous film-industry egos and star tantrums as it’s possible to be.”

On my first day at camp, we pile into qamutiqs after lunch for the 10-minute ride to a bluff overlooking the set, which consists of two clusters of igloos perched near the sea ice. S. F. Said has invited me to join him, and we follow the lead of others who slip caribou booties over modern boot soles to avoid leaving modern tracks as we hike onto the 1920s set. Nearby, two dog teams howl.

Actors wear traditional caribou, sealskin, and polar bear costumes sewn by women in the community. Today’s scene depicts a meeting of the Danish explorers and an Inuit family. During the shoot, S. F. and I join Vibeke Vogel, a Danish producer, inside one of the igloos. This is my first glimpse of a real igloo from the inside, and I find the design, the beauty of the light filtering through blue-white snow, and the silence awe inspiring.

Blocks of frozen walrus meat—snacks for the cast and crew—fill one corner. We chip off a few pieces and taste them. Gamey, but delicious—a warmup for tonight’s polar bear dinner.

This day and my ensuing days at Siuraajuk blend into one another. Throughout my stay, the laughter and camaraderie of the group are constant, the weather spectacular. As for the physical challenges, throughout my trip I manage, with the help of the Inuit, to maneuver around the set and the camp. It isn’t always pretty—sometimes I fall or crawl from spot to spot—but it gets the job done. Kunuk takes me under his wing, driving me by snowmobile to his favorite sites and inviting me to visit with elders in his cabin.

Having a chance to live with the Inuit and seeing them work together, I experience firsthand some of the keys to their mastery of the Arctic environment—resourcefulness, adaptability, cooperation, patience, and determination. And I realize it is the depth and strength of their culture that makes Kunuk’s films so compelling.

Through this experience, I hope I have awakened a few of the same qualities in myself. One thing is certain. Now, when I face a challenge, I have a new mantra: “What would the Inuit do?”

Sonia Gunderson is a regular contributor to two Canadian magazines: Inuit Art Quarterly and Above & Beyond.

Gunderson recently returned from a second trip to Igloolik, where she attended the first showing of The Journals of Knud Rasmussen with Zacharias Kunuk and the cast and crew of the film. She plans to return to Igloolik in January 2007 for the “Return of the Sun” ceremony, and to conduct interviews with community elders for a forthcoming book.

French Travel Tips: Get the Most Out of Your Trip to France

Hiking the Appalachian Trail, Jun 07 | A 2,174-mile Walk in the Wilderness