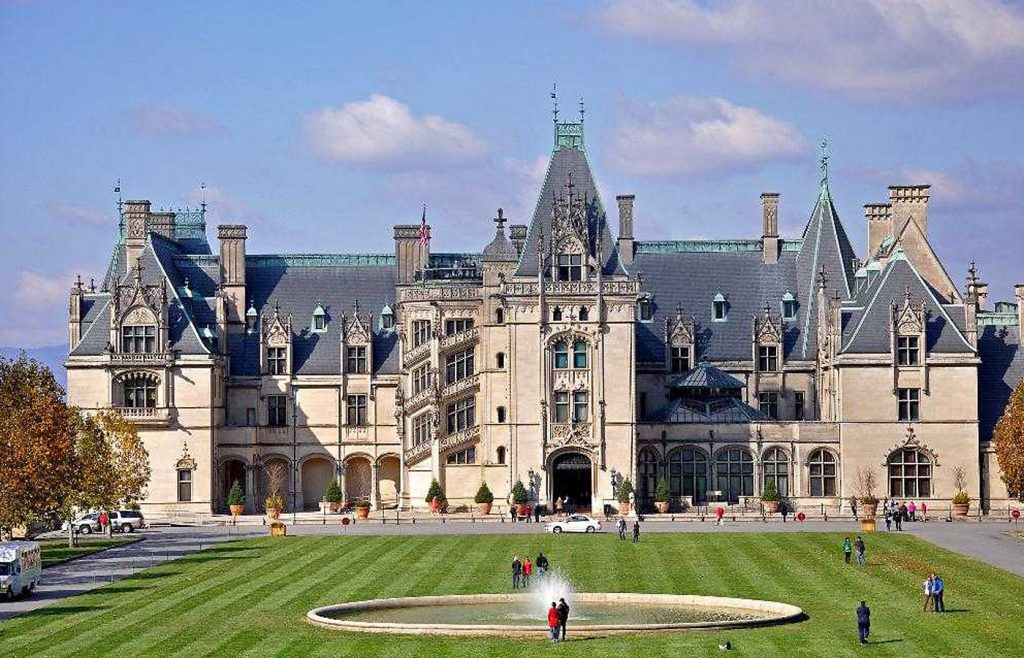 I just got back from vacation in North Carolina. It in a way, it was a big mistake. I spent the first three days touring the Biltmore “Holy Cow” Estate. If you’ve never been there, don’t let the word “estate” fool you. This guy once owned everything he could see from his rooftop—a 200-mile vista that included what is now part of the Pisgah National Forest and Mount Mitchell, the tallest mountain east of the Mississippi. What ran through George Washington Vanderbilt’s head when he woke up every morning is very different from what runs through my head:

George: “I must buy a mountain today, and a town, and a couple of 15th century tapestries.”

Candy: “My eyes feel puffy. I must buy some eye pads.”

I went on all the extra Biltmore tours. One took you behind the scenes to see un-renovated rooms. Another took you onto the rooftop. Did you know that the raised portions of the copper plating on the roof were gold leafed? Even the servants’ quarters were finished with hand-carved doors, graceful gothic arches, and state-of-the-art bathrooms. Apparently he spent about $7 million the first six years, not including furnishings. And that was at 1890 prices. I don’t care how much money you have now, though, you could never build such a place again. No one has the skill set. You’re lucky to get someone who can float the plaster on sheet rock and have it come out level.

The week before I left home, I was stripping wallpaper from a small half bathroom. It was dark, moody paper that wasn’t applied with much skill, so there were wrinkles and shrinkage at the corners. Unfortunately, removing the wallpaper also removed the plaster from the drywall. It’s going to cost me $500 to resurface. I don’t know why I bothered removing the ugly paper. I should have just gold-leafed the walls, hung my John Singer Sargent, nailed up the tapestry that once belonged to Cardinal Richelieu, and been done with it.

After we left the Biltmore, we drove north on the Blueridge Parkway. If you do this, never driver faster than 35 m.p.h., and if someone tailgates, pull over at the next turnout. They have turnouts about every half mile, and every one is beautiful. Many overlooks are the trail head for great day hikes down into shady valleys. One of my best moments on the whole vacation was at a turnout. We parked and walked up a path about 25 feet to a little sitting area that overlooked a valley. The sun burned through the fog and warmed the rock wall. The mountain ranges stretched out before us. There was nothing as far as I could see that was man made. I couldn’t even hear cars on the Parkway. Only a hawk floated silently off in the distance. It was just so restful to be able to enjoy something for a moment that didn’t require you to have more assets than you had when you were only a day old. If somebody was sitting next to you, even if they had more stock options, the mountains would deliver the same experience to both of you. It was a shame to get up, but we thought we needed to get somewhere.

Where we thought we needed to be turned out to have traffic congestion, bad hotels, and overflow tourism from the Nascar race in Bristol. George Vanderbilt didn’t buy up enough land, in my opinion.

A few days later, on our last evening in North Carolina, we stopped at a town called Little Switzerland and got a room at the Big Lynn Lodge. Dinner and breakfast is included in the room price. Our room had wood paneling and was very clean. For meals, we walked over to the lodge, which is a huge room with a wall of windows looking out over the mountain ranges. You have an assigned table. The longer you stay, the closer your table gets to the windows. But it didn’t matter that we weren’t close. We were surrounded by family reunions and groups of retirees traveling together. Most people had soft mountain accents. Everyone gets the same dinner, except you get a choice of apple pie or chocolate cake for dessert. And it reminded me of the food my family used to make. There was shelled corn, for one thing. I can’t remember the last time I had shelled corn, but it really reminded me of my people.

One side of the dining room was only a half wall, looking into a communal area with a player piano, a bunch of overstuffed furniture, bookcases full of novels and magazines. An unfinished jigsaw puzzle was laid out on a coffee table. Outside people played horseshoes or sat on benches and talked as the evening turned dark and a bat flew back and forth, looking for food. On the benches next to mine, a group of women talked. They seemed to be related. I eavesdropped in a lazy sort of way, not really trying very hard.

“My mother wasn’t mystical or psychic or anything,” a young girl was saying. “She wasn’t a witch or anything. But I once had this dream about . . . .” The breeze carried off some details.

Later someone’s husband came to tell them about this really funny tape he has. On my way to our room later, I saw them all standing around his pickup, listening to the tape deck and laughing.

For breakfast the next morning you could choose anything you wanted from the breakfast menu. It was terrific. It made me very happy, but at the same time sad, because it reminded me of my folks and what it was like when I was little. The food you grew up eating comes back to haunt you when you get older, and you find out that stewed prunes, grits, and bacon are really what makes your body happy, not grape leaves wrapped around tofu and millet. I got a cup of coffee that morning—just plain coffee. Not a double espresso mocha grande latte with cinnamon. And not organically grown green tea with antioxidents. Plain coffee in a brown ceramic mug.

I miss being a kid. I’m sad that I had to grow up. I don’t feel like going back to work. I’m ever so tired of technology and self-improvement and yuppie food. I like canned corn. I want to go back to Big Lynn Lodge and browse some old Reader’s Digest magazines and work a puzzle and sit next to some old people and watch a John Wayne movie on TV in the common room. I guess the good news is that I’m more likely to do that than I am to live like George Vanderbilt, who by the way died of a burst appendix when he was 51. He should have eaten more canned corn, maybe.

Edits, by Candance Booth | When the Status Quo Just Won't Do