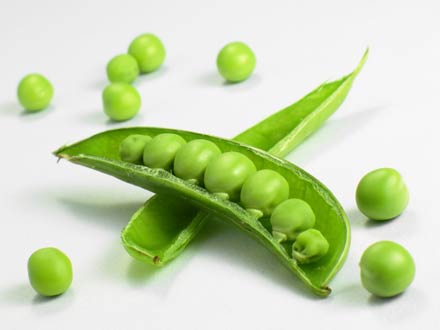 Peas like cool weather, so it’s usually one of the first crops planted in the spring.

Among the first plants to come to fruition in the Devotay Gardens, and indeed in most gardens this time of year, is the simple pea. Pisum sativum, also called P. hortensis, is the only species of edible pea, though there are hundreds of varieties within that group.  Most common are what the botanists call P. majus and P. minus, which as their names might infer are the fancy tags for highbush and lowbush peas.

While the highbush generally produces a better quality pea, with more sugar and less starch and in larger pods so as to produce more individual peas, it also produces smaller individual peas and requires support trellises. This has led to a prevalence of lowbush peas in commercial production, which are easier to cultivate and harvest, even if their larger peas are far inferior in flavor and (as is so often the case) nutrition. It is a good example of that dual delusion that we Americans toil under—that bigger is the same as better, and that prettier is the same as tastier.

Our peas will hit their stride in early June if we can keep the rabbits at bay, and with them comes the enjoyable and convivial task of shelling them. This is an excellent social event for the family, and children are particularly good at it because of their smaller fingers.  You may find it helpful to require the kids to whistle while they work, though, because whistling lips cannot eat peas.

As an aside, I should mention the Chinese Sno Pea, which is not Chinese and has nothing to do with snow, so far as I’ve been able to determine. Popular in part because one can consume the entire tender pod, it is actually of European extraction, and brought to the U.S. by the people who would later be known as the Pennsylvania Dutch. I think it got its association with the Chinese because of its pervasiveness in modern Chinese-American stirfrys. The French have what I feel is a more agreeable name for the sno pea— they call it mange-tout, which means “eat everything.”

Should you have a bumper crop of peas this year, there are many ways to preserve them. Of course they dry well, to be saved for winter soups, and are relatively easy to can as well, though I find even home-canned peas lack that fresh springy sweetness that makes peas such a pleasure in the first place.

For the peas you will not consume right away, I recommend a little modern convenience: freeze them.  To do this, bring a large pot of salted water to a boil, and have an ice bath in a large bowl on the counter next to the stove. Using a large strainer, plunge the peas into the water for about 30 seconds, stirring once. Remove and plunge them into the ice water for one minute, again stirring once. Remove and allow to drain over the sink, then spread onto paper towels to absorb excess water.
From there, spread them onto parchment-lined cookie sheets, and freeze for 1 hour on any level surface in your freezer. After an hour, remove them and swiftly break them up to Ziploc bags before returning them to the freezer. They will keep this way for three to six months, and be ready at a moment’s notice for salads, side dishes, or a light fresh pasta.

Walk to Work, by Dan Coffey | One Solution to the Energy Crisis