The University of Iowa Museum of Art enveloped by flood waters from the Iowa River in mid-June 2008.

A flood is not like other natural disasters. It doesn’t violently uproot trees and slice open houses like tornados. It doesn’t produce smoke and charred buildings like a fire. It doesn’t render roadways cracked and buildings crumbled like earthquakes.

No, a flood’s method of destruction is much more subtle. Floods creep. Just an inch or two higher each night, and suddenly, rivers overflow their banks, sending water where it’s not supposed to be. Like the Iowa River in mid-June, when the water level in Iowa City reached nearly 32 feet—ten feet above flood stage.

One of the most unsettling things about the flood is that unless you are near the river, the town seems completely normal. Even the river itself can look deceptively calm—though sewage drains spouting frothy streams, torn-up ground, and orange caution fences hint at the underlying crisis.
In many ways this lack of a big bang—this very gradual build-up of trouble and even longer recovery period—is so much more difficult and abstract than the very visible ruin of the 2006 tornado.

In mid-July, I got the chance to go inside the University of Iowa Museum of Art (where I am the Marketing and Media Manager) for the first time since the wee hours of the morning on Friday, June 13. It had been nearly four weeks since I found the building locked up tight at 8 a.m. when I had returned to continue packing. 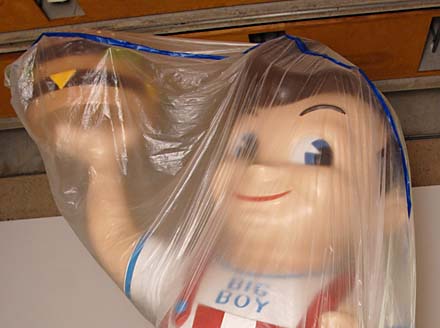 Wrapped in plastic, John Freyer’s Big Boy awaited removal from the University of Iowa Museum of Art as the floodwaters crested in mid-June 2008.

It’s pretty amazing what four weeks’ worth of cleaning can do. The building, which had about three inches of water inside on the main level, has been basically gutted from the inside out—the walls are cut up to about three feet in most places to prevent mold from traveling further up, and all the chairs and equipment that were left inside have been either moved out or wrapped in plastic.

In many ways, the news from the museum is overwhelmingly positive. The entire collection was saved and is being stored in a facility in Chicago. We’re proceeding with as many scheduled exhibitions and events as possible in alternative venues. And the cleaning process at the UIMA building is moving quickly: though it is very bare, the building smells clean, white plastic tubes circulate cool air for climate control, and it’s structurally sound.
But, of course, the sense of loss is undeniable. That is why we, like so many others affected by the flood, are doing everything we can to move forward.

While the University is evaluating the next stages for the UIMA, one thing is certain: there will be a University of Iowa Museum of Art. Thankfully, the building does not make the Museum, and we still have the pieces that are critical for moving forward: our collection, the staff, and all of you—the community members whose support makes a museum possible.

Here’s a peek at what we have planned so far, tentatively slated to open October 24.

• “Daniel Heyman: The Amman Portfolio,” an exhibition of portraits of former Abu Ghraib prisoners, will be on display in the Humanities Gallery at the Old Capitol Museum. This timely exhibition is a collaboration with the Old Capitol Museum and the UI Center for Human Rights. Heyman’s artwork provides moving portraits that reveal the humanity of prisoners who had been demonized. The artist created his prints by scratching directly into the surface of the etching plate during lawyers’ interviews with the former prisoners, lending a sense of immediacy to the work. The show will culminate in a visit from Daniel Heyman in early December, with a gallery talk and panel discussion addressing art and human rights.
Nearly all of the programs that are usually held in the UIMA building, such as the Writer-in-Residence readings and Know the Score LIVE!, have been moved to the Old Capitol Museum Senate Chamber.

Our Education Director, Dale Fisher, is working hard to come up with ways to keep schoolchildren (and everyone else!) engaged in the UIMA collection while it is away, including visiting schools with slideshows and sample objects.

The Museum pARTy! fundraiser will occur as planned on Saturday, October 11, at Hotel Vetro in downtown Iowa City. We welcome you to join us in celebrating the somewhat miraculous survival of the museum.

Numerous people have offered assistance to the museum, and we deeply appreciate these expressions of concern and support. While we work to get spaces and dates ironed out, our calendar remains very much in flux, but we’ll do our best to keep you up-to-date through our website, www.uiowa.edu/uima, and our blog, uima.blogspot.com. Moving forward is a slow and often painful process, but we know that together we will overcome the challenges that lie ahead.

For more articles on arts and artists, see the Index.