Editor’s note: Many people have called us to find out if we have contact info for Dick Schwab: Here’s the address: Schwab Round Barns, 245th St. Solon, IA 52333

One thing seems to lead to another in Dick Schwab’s world.

A stone path leads to the center of a labyrinth and back. Young couples follow his quiet lane to wedded bliss. The four leaves of the 4-H emblem led him to a full, multi-faceted life.

A tornado that downed some trees on Schwab’s property in rural Solon in 1984 led him into the woods to clean up. He came out with a lot of firewood and he needed a place to store it. He also noticed, he said, that there were “some really nice logs.”

He decided he should use some of those nice logs for lumber, hauled them to a sawmill, then built a firewood storage barn.

“I built three rectangular barns,” Schwab said—little barns he built in 1985, 1986, and 1987. He put in a pond in 1988 and in 1989 built his first round barn. Eventually he bought his own portable sawmill to turn other downed trees into useful lumber.

Schwab said he realized, after building the first few barns, “This rectangular, square stuff is kind of boring. Anybody can build rectangular barns.

“I had this vision of building these round barns.”

So he did, and he still does.

“The barns are a labor of love,” he said. “I love building them, even more finishing them, and even more using them with others who appreciate their beauty.”

Schwab, now 57, retired at 48 after 17 years at NCS Pearson. He grew up on a farm near New Ulm and St. George, Minnesota, so he knew something about barns. He’d had a few college drafting courses while working toward degrees in accounting (a BA from the University of Minnesota, Duluth, and an MBA in marketing from the University of Minnesota). He read a lot about barns. Somewhere along the line he read “Without Right Angles: The Round Barns of Iowa” by Lowell J. Soike (Penfield Press, 1991).

“It’s a cool book,” he said. It was so cool that it led him to begin building round barns, and polygons and arches and eventually a labyrinth that serves as a starting point of sorts for young couples in love.

Schwab and his wife, Katherine Burford, moved to Iowa from Minnesota in 1984. They live on 90 acres southwest of Solon. To get there, you turn from Sugarbottom Road onto a narrow, easy-to-miss graveled lane. You emerge from a canopy of trees to see a picturesque pond on your right, surrounded by lush green grass. Reflected in the pond on a calm day, you can see a 65-ton limestone arch that sits on the hillside and serves as a backdrop for an open-air amphitheatre. Just beyond, the framework for Schwab’s biggest barn yet soars in great arcs against the sky.

The “Celebration Barn” is 100 feet in diameter and 50 feet tall to the top of the cupola. The exterior is round, made of limestone cut from quarries in Anamosa and Stone City. Inside, celebrants will see 24 straight walls along the circumference. The lumber is almost all recycled, as are the paving bricks that line walkways connecting some of the barns and that will encircle the big barn when it’s finished.

The nearby amphitheatre, featuring a labyrinth patterned after one at Chartres Cathedral in France, has already served as the site for a number of wedding celebrations. There might have been more by now, but the Celebration Barn was struck by lightning in July 2007 when the exterior was about three-fourths finished. Construction started over.

“We repoured the concrete and started pounding nails,” Schwab said. The Celebration Barn is to be completed in time for another wedding in May 2009. The smaller, round “Party Barn” hosts receptions for now.

Schwab said he wanted a round stage for the amphitheatre (again, no right angles) and just liked the idea of a labyrinth. “It’s about walking meditation, and helping people find peace,” he said. “That seemed to kind of fit.”

Helping couples get off to a good start in marriage seems to fit well with another of Schwab’s avocations. He’s an angel investor, a partner in Eastern Iowa Angel Investors.

Angel investors typically help fund start-up companies, which Schwab began doing in 1999 when a conversation at a Christmas party led to the establishment of Premier Automotive Inc., an auto body and collision repair service in North Liberty. 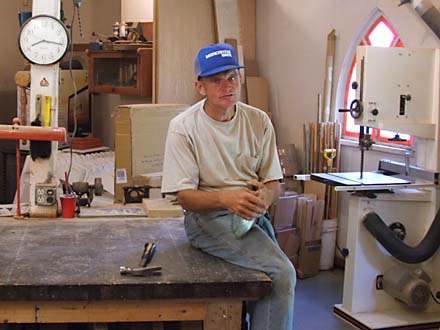 Dick Schwab in his workshop, where he likes to plan and build “things of beauty and utility.”

“We have seven or eight companies now, nurturing and helping them along,” Schwab said. “Some are doing well, and some are struggling, which is pretty common.”

Schwab said a prime consideration in picking a business to back as an angel investor is familiarity. “It’s got to be something I can understand,” he said. “It also has to be local, something that will create jobs and opportunities in Eastern Iowa.”

“You’re best off investing within 100 miles of where you live,” he added. “You can’t just give them money; you want to be there to give them advice. They almost always need advice more than they need money.”

Schwab has long been involved in community and philanthropic activities, such as supporting the Solon library and United Way. His ongoing contributions led to his being named “2001 Person of the Year” by the Iowa City Press-Citizen. In announcing his selection, the newspaper said:

“… It seems that no matter how long the list of this 49-year-old man’s accomplishments, we would not be able to capture in one sitting the effect Dick Schwab has had on so many individuals and organizations in the Johnson County area over the span of just two decades.”

Fittingly, Schwab uses 4-H concepts to describe, in his own words, “What makes this a good life.”

“Heart: Giving back to the community and individuals through volunteering.

“Hands: Using my skilled hands to build things of beauty and utility.

“Health: Doing all this outdoors and having free time to enjoy wilderness areas and recreational sports.”

“Alone, each would become tedious,” Schwab says. “Combined, these are a spectacular mix.”

Watching the latest structure take shape, one would be hard-pressed to disagree.

Sorry, we have no contact information for Dick Schwab. If you come across a working phone or email address, please let us know!