I know, I know: I’ve been a slacker blogger lately. But now I have something truly noteworthy to share. This past Monday evening, I was fortunate enough to catch two fabulous former Fairfieldians (and dear friends) performing in NYC’s prestigious Carnegie Hall: Erin Gee and her brother Colin Gee.

Those names surely ring many a bell throughout Fairfield, where the two grew up, and in Iowa City, where Erin obtained her Bachelor’s and Master’s degrees in piano and composition respectively at the University of Iowa. Erin’s long hours of study with Réne Lecuona, Lawrence Fritts and Jeremy Dale Roberts have certainly paid off; she’s quickly establishing herself as one of the U.S.’s most noteworthy – and unconventional – new composers.

Erin’s recent string of awards (too long to list, but see it here ) include the Samuel Barber Rome Prize and the Teatro Minimo first round prize from the Zürich Opera House. Her performance at Carnegie’s Zankel Hall was part of the American Composers Forum and was sponsored by Louis Vuitton (for the occasion, she was decked out in a gorgeous, flowing Louis Vuitton gown). All this, and she just completed her Ph. D. in music theory from the University of Music & Dramatic Arts Graz in Austria.

But onto the music. Erin’s dreamlike, avant-guarde compositions are formed around her signature “mouthpieces:” a series of “non-semantic” language and percussive sounds. Really, though, her work defies description. It’s at once otherworldly and intimately familiar, somewhere between whalesong, whistling winds and the celestial hum.

Here’s what Martin Gasser had to say about it:

Often, an impression of ephemeral, fragile poetry is formed from the gossamer-quality of the work, which continually aspires to plumb the possibilities of the human voice, while also serving as the inspirational source for contemplating new instrumental sounds.

Better yet, have a listen yourself: at Erin-Gee.com, under List of Works.

At Carnegie, Erin performed Mouthpiece XIII: Mathilde of Loci, Part 1, the first section of a three-part concert opera narrating the mysterious final moments of a fictional scholar of memory. Her musical performance was accompanied by video art and physical theater directed by her brother Colin Gee, formerly the principal clown with the Cirque du Soleil. Colin is currently the founding Artist-in-Residence at the Whitney Museum of American Art. 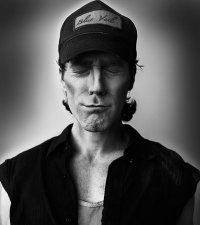 The performance was exceptional, and I’m so thrilled I had the opportunity to go, along with Jen Howland, part-owner of Revelations Café here in Fairfield.

Jen, Erin and I all wore scratchy wool uniform skirts in private school together (Colin was two grades ahead of us), so it was pretty damn cool seeing Gee-squared up there onstage. Kind of brought tears to my eyes, if I’m to be honest. 😉

So three cheers to Erin & Colin for that performance! The next morning, the brother/sister duo were off to Europe for another show. Something tells me this is all just the beginning…

Rise Above Your Shadow