"The Secretary of Defense deeply regrets to inform you that your son (or daughter) / rank / name has been killed while on duty.” These terrible words begin the scripted message spoken by the U.S. military’s casualty notification team, two uniformed gentlemen that nobody wants to see at their door. When a soldier dies, their job is to inform the NOK (next of kin) immediately and express sympathy with a few memorized words that go unheard while the family reacts with fury, screaming, or disbelief.

The notification team must follow strict guidelines. They speak only to the NOK. They do not make physical contact. They do not soften the message of death with ambiguous phrases like “passed away.” They express sympathy while maintaining a professional distance. They are not friends, they are not family; they are just the messengers.

The Messenger delivers great nuance through the superb performances of Ben Foster and Woody Harrelson, and through the skilled writing and direction of Oren Moverman, an Israeli army veteran who co-wrote I’m Not There. The Messenger is one of those films that uses 30 percent less dialogue than most, and a lean cast that is quality, not quantity. Ben Foster, whose impressive Hollywood resumé began with community theater in Fairfield, Iowa, plays Sgt. Will Montgomery, a decorated war soldier whose tour of duty in Iraq is ending. Having recovered from his wounds, he enters his final weeks of service stateside by teaming with casualty notification veteran Sgt. Tony Stone, played to the max by a spirited Woody Harrelson. Samantha Morton plays the wife of a casualty soldier who appears to have mixed feelings, and continues as a person of interest with a role in the story. 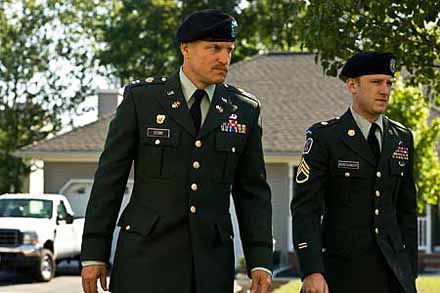 The Messenger is a small quiet film about the big noisy topic of war. It juxtaposes military formality with the extreme emotion of grief, and the pain of vulnerability. And makes it clear that there are two kinds of people: those who have seen war and those who have not. Because, as Officer Stone says, once you’ve seen it, you can never un-see it. But the experience of war is not required to appreciate the insights that seep out through the sparse dialogue, and through the connection that slowly develops between two officers whose job requires some pretty thick skin. This film looks at that layer of protection. It’s about life and loss, and life after loss. This film is about being human.   A-