The last year in a remarkable decade for film turned out to be a bit middling. To be fair, it was a very good year for small, strange films, many of which I haven’t seen yet (The Maid, Bad Lieutenant: Port of Call New Orleans, or Police, Adjective). I also didn’t see the two acclaimed animated movies, Coraline and The Fantastic Mr. Fox. I don’t know why, but I wasn’t feeling very whimsical this year. A lot of the Big, Serious Movies About Life were dullards (Invictus, The Road, The Lovely Bones) and the event movies were dumb (except one). No matter, there were still plenty of smart, haunting, funny, and enchanting films. As always, let’s count down in reverse.

Before Sam Raimi became a franchise director with the Spiderman series, he made blissfully schlocky horror movies that effortlessly made fun of B-movies while lionizing them. His Evil Dead series remains the touchstone by which all horror comedies are measured. You can feel the joy and relief in Raimi’s direction of Drag Me To Hell. After increasingly expensive and overstuffed Spiderman movies, the gypsy-séance revenge flick Drag Me To Hell is almost criminally fun and freewheeling. With strong and sympathetic performances by Justin Long and Alison Lohman and the creepiest gypsies since Inland Empire, Drag Me To Hell was the Friday night movie of the year, a funny shivery blast.

It’s pretty easy to take Pixar for granted. Every year they churn out gorgeous, elegiac, and moving fairy tales that appeal to adults and children alike. Their run of the last four years—The Incredibles, Ratatouille, Wall-E, and Up—is an unprecedented achievement. Up is the most simple but perhaps the most nuanced and haunting of these films. The story of a man who turns his house into a hot air balloon to fulfill a lifetime dream of adventure is as witty and thrilling as it is heartbreaking. It is, I think, the first animated movie to bring me to tears. A marvel of taut and meaningful storytelling, Up features the second best villain of the year.

James Gray has been a promising director for close to 15 years but has never made a truly good movie. Returning again to the Russian Brooklyn neighborhood of Brighton Beach, he finally strikes gold with an exquisite and devastating character piece that recalls the episodic Hal Ashby films of the 1970s. Featuring a magnetic, brilliant performance by Joaquin Phoenix and strong supporting work by Isabella Rosselini and Gwyneth Paltrow, Two Lovers has a lived in, unpredictable feeling. Not only do the characters  feel real, but their actions feel unscripted. At once sad and rapturous, Two Lovers was the most unfairly overlooked film of 2009.

Jason Reitman truly came into his own as a mature, humanistic filmmaker with Up in the Air. George Clooney gives a classic, flinty, and charming performance as axeman Ryan Bingham, who fires people when their cowardly bosses won’t. He lives an unfettered, attachment-free life and is most comfortable in chain hotels and airport bars.

After being saddled with a perky new employee (the great Anna Kendrick), and meeting a fellow professional traveler (the even better Vera Farmiga), it seems that Bingham is beginning to see the importance of personal relations.

But Up in the Air isn’t that tidy. Both thorny and compassionate, it never settles for clichéd resolutions. While the film’s dark heart of layoffs is obviously extremely topical, it’s never exploited for cheap sentimentality. Instead, Up in the Air is a beguiling testament to figuring out what matters in life.

A lacerating, tough masterpiece, District 9 takes a sci-fi trope as old as The Twilight Zone (maybe older)—aliens being seen as outsiders and hence a parable for racism and xenophobia—and explodes it in such a brutally thrilling manner that one leaves thinking about the world in a different way.

After a lazy misstep in Burn After Reading, the Coens return with their most personal and inscrutable film. The tale of a man punished by forces beyond him in 1967 suburban Minneapolis, A Serious Man fuses Jewish identity, post-modernism, and hilarious nihilism into a film that’s as mordant as it is humane. Buoyed by fantastic performances (Fred Melamed and Richard Kind, in particular) and a brilliantly mysterious prologue, A Serious Man is the best Coen brothers movie since Fargo.

A breathtakingly lean and original gangster movie, Gomorra takes an unsentimental look at the Camorra, a Naples-based criminal syndicate so large and all-reaching its brutal tactics seem almost flippantly banal.

Filmed in run-down blue-collar projects, tanning salons, and beach houses and featuring many non-professionals, Gomorra reaches the magic space of films like Pixote or Battle of Algiers, where documentary and auteur stylings fuse into one fluid, thrilling experience. Episodic in structure, Gomorra follows a dozen or so characters and their tragic encounters with the Camorra. The film is so matter-of-fact that it’s almost easy to miss its outrage. But it’s there, beautifully shot and edited.

Quentin Tarantino’s delirious, rowdy, fantastically entertaining WWII fantasy demolished my preconceptions. I thought it was going to be a grim revenge movie, all blood and guts and arcane genre posturing (like his last dreadful film, Death Proof). Instead, Inglourious Basterds is a wickedly spry piece of filmmaking. 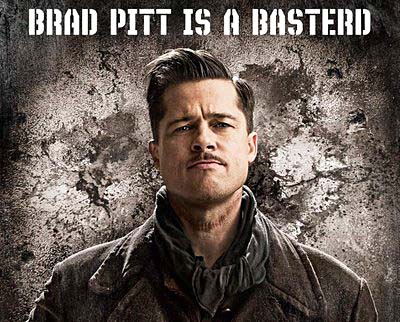 With one of the best opening sequences in recent memory, Inglourious Basterds never slows down, Tarantino’s dialogue smolders, the cinematography is richly hued . . . and the characters! Christopher Waltz shines as one of the great villains of all time, Brad Pitt chews scenery with reckless élan, and Melanie Laurent shows us what revenge really means. It’s the greatest Tarantino film since Pulp Fiction, greater even than the transcendent Kill Bill films because it’s even crazier and more prone to failure. Tarantino dreamed to make a WWII movie to end them all, and he did.

I can’t think of a more underrated director than Kathryn Bigelow. For 25 years she has quietly made some of the most robust movies of physicality around. Point Break, long viewed as a kind of B movie joke, becomes more burnished with each passing year. The brutal Strange Days seems more thrilling and prescient today.

Finally, after 25-plus years in the business, she made the right movie at the right time with the right star. A ruthlessly efficient episodic narrative about a wild-man bomb-diffuser, William James (Jeremy Renner), The Hurt Locker is the most lucid  combat film I’ve ever seen. Jeremy Renner, like Christopher Waltz (in Inglourious Basterds) is so kinetic, so simultaneously real and larger than the life, that his performance feels both momentous and immediate. Bigelow’s direction is peerless. There’s no stupid green-wire/red-wire bomb scenes or cheap verité moves. It’s just tough, brilliant filmmaking by a badass woman whose been doing this for two decades.

In any other director’s hands—Spielberg, Peter Jackson, anyone—Avatar would have ended up a train wreck. It cost nearly $500 million to make. It has no stars. It’s an insanely ambitious vision that mines an archetypal narrative arc shamelessly. James Cameron, 12 years after making the most successful movie of all time, basically risked his entire career on this. And it rules.

Yes, the script’s cheesy, but so are the scripts for Casablanca and Lawrence of Arabia, and Ben-Hur and Jaws. It doesn’t matter. The filmmaking is so assured, so spectacular and shoot-for-the stars dazzling, that even the clunky lines become triumphant.

I don’t know the scope of Avatar’s technological innovations, but for the first time a director has used CGI and software to create a living, breathing, boundlessly creative world. After Avatar’s see-it-to-believe use of 3D, it’s hard to raise much excitement for non-3D event movies (Iron Man 2? Meh).

Avatar is a game changer in every sense of the word. I’ve seen so many movies that I’ve forgotten what made me fall in love with movies in the first place. Seeing Raiders of the Lost Ark or Terminator 2 as a kid were such immersive, ecstatic experiences that they lingered for months. James Cameron brought that back to me.  Judging from the box-office results, he brought it back to the rest of the world, too.

Worst of The Year:
Gerard Butler

Gerard Butler had perhaps the most  awful year an actor has ever had. I can’t really imagine anyone topping it. First he starred in the shrill “romantic” comedy The Ugly Truth. Next was the inane and foolish Gamer. Finally came the Saw-meets-Death-Wish revenge fantasy Law Abiding Citizen. All of these films weren’t merely bad, they were smarmily unpleasant. In each, Butler delivered charmlessly leaden performances. Shockingly, two of  these three films were bona-fide hits. Which means that Butler may actually pull off a repeat for 2010.