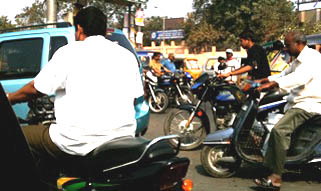 I've been on a bit of a hiatus from writing my blog recently but was amazed to notice that I hadn't posted anything since last November. My main excuse is that I was plain exhausted from driving 2-3,000 miles a month in my day job as a land agent for wind farms (I knew I was in trouble when I went to the cinema one day, sat down, and tried to fasten my seat belt). When you combine winter in Iowa (thank God, spring has finally arrived) and political inertia that has been parading as government in Washington for the last few months, who wouldn't be running out of steam?

In the lull between words, my wife and traveled to India to spend some time at an ayurvedic health clinic in Hyderabad so we could fix few errant body parts and undergo a much needed 60,000 mile service (the human equivalent of changing the oil and fluids, tightening a few loose screws, checking the fan belts, replacing the air filters, etc.) The trip had been planned for some time and collided serendipitously with my need to escape.

India can be very therapeutic for the western mind if you are lucky enough to see it that way (if not, it will drive you insane). Contrary to the western habit of trying to control every minute of our lives through timetables, schedules, appointments, careful planning and insurance against every little thing that might possibly go wrong, India runs on no apparent logic or planning at all. In India things just happen. They swirl and coalesce and emerge in some mystical and magical fashion out of what, on the surface, appears like absolute chaos. In India, God is in charge and humans are merely bit players.

Take Indian highways, for example. There are three general traffic rules at play:

1) Everybody heading in the same directions keeps to the left hand side of the road, more or less; but that is only when it is convenient. A classic example of this is when a friend of mine was taking a taxi into New Delhi from the airport. The left side of the divided highway being blocked by stationary cars, his trusty charioteer headed over to the other side and drove against the flow of the traffic. "Don't worry, sir," said the smiling driver to my apoplectic friend, "Goes in same direction!"
2) Larger vehicles take precedent over smaller vehicles. Think of playing bridge: trucks trump cars, cars trump scooters, scooters trump bicycles and God help you if you are a pedestrian.
3) If you want to go faster, blow your horn louder (makes sense, right?)

There are no traffic lights or stop signs, at least none that any one takes notice of. Even a short journey in a scooter rickshaw is like running the bulls in Pamplona, with dinged and dented vehicles heading at you from every direction. Vehicles are weaving in and around and missing each other by bare inches, like swirling clouds of mosquitoes. Logic tells you that there is no way to reach your destination alive. There is nothing to do but let go and leave your fate to a higher power. And that is the magical part, because against all odds, and with a healthy dose of luck, you often do reach your destination. It's a lesson in trust and letting go.

Recent statistics show over 100,000 people die each year on the India's roads. As you might expect, the vast majority of these are pedestrians, cyclists and those driving two-wheeled vehicles. Billboards in New Delhi declare: "Drive Safely. Avoid Death". But these figures are surprisingly comparable to the United States, which has a third of India's population and about the same proportion of fatalities (37,000 last year); and we probably have one of the strictest highway codes in the world. So much for regulation.

Given the fact that India is a country of over one billion people, all of whom seem to be on the move at the same time in a seemingly crazy fashion, it is amazing that anybody reaches anywhere with all their body parts intact.

Anyway, I survived, am back at the keyboard, and hopefully, will be a more reliable blogger in the future.