Every couple years, a gritty “cutting-edge” superhero movie comes out that gets mixed reviews and is quickly forgotten. Kick-Ass has already joined these ranks—it choked on its own hype, opened to a disappointing weekend, and received indifferent or morally outraged reviews.

I think it’s time to lower our expectations for these kinds of movies. The popularity of mainstream superhero films notwithstanding, these lower-budgeted, gnarlier siblings are their own cultish genre. On these terms, Kick-Ass is pretty good. It’s the kind of formulaic movie that thinks it’s smarter than it is and more violent than it needs to be. That said, I won’t lie—I enjoyed it. Despite its fairly indefensible nature when it comes to violence and the depiction of a pre-teen girl, it’s a well-made trashy flick.

Dave (Aaron Johnson) is a completely average high-school nerd who’s obsessed with comic books. He buys a scuba outfit off the Internet, outfits himself with some batons, and sets out to fight crime. His first attempt gets him stabbed and hit by a car. In recovery, metal plates and nerve damage give him a slightly higher pain threshold.

His second attempt is a bit more successful, aided by a cell-phone video that makes him an Internet sensation. Soon after, he finds himself out of his league when Big Daddy (Nicolas Cage) and his diminutive but deadly daughter Hit Girl (Chloe Moretz) come onto the scene. They’re  heavily armed costumed psychopaths who murder mob goons with  abandon in their pursuit to bring down Frank D’Amico’s (Mark Strong) empire. 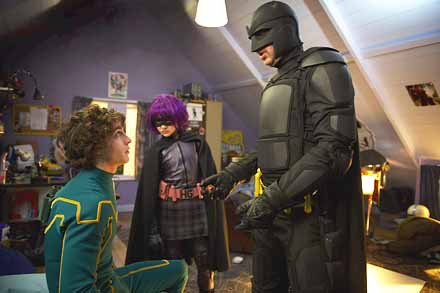 This is where Kick-Ass becomes a fairly conventional, albeit entertaining, midnight movie. Deviating from its realistic beginning, the film transforms Big Daddy and Hit Girl into stone-cold, twirling bad-asses. They’re exciting to watch, but they’re still highly improbable fantasies.

Movies that explore the superhero myth are rarely successful because the filmmakers can never restrain themselves.  They love the idea of dirtying up comic books, but in the end they still put in bullet-time fight scenes. A true exploration of violent vigilantes who dressed up in costumes and killed criminals without pause could be a darkly hilarious movie. Imagine Werner Herzog making a movie about Tea-Party vigilantes who dressed up like minutemen and roamed rural Idaho. Would you see that movie? I’d be first in line. Instead we get Kick-Ass. Is it fun and snarky? Yes. Is it smart and ironic? No. It’s a B-movie that will probably be in the dollar theaters by the time this review is printed. Which is where it belongs. In a good way.  B

Morcheeba & Opera to Relax | Welcome to the Musical Renaissance