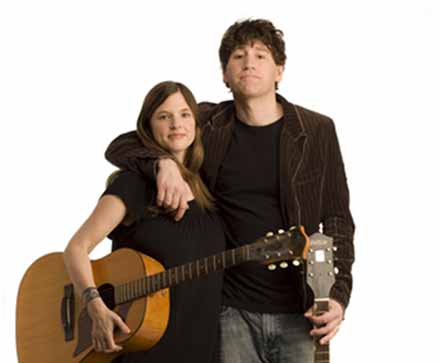 Deb Talan and Steve Tannen are the married couple that makes up The Weepies.

As a tour stop for many singer-songwriters, Fairfield has been blessed in recent times to hear live performances from artists such as Ellis, Wah!, Anais Mitchell, and Katherin Schorr (of Sweet Talk Radio). Our theme this month and next will be to lift the torch to honor some of the lesser known international female singer-songwriters who deserve praise for their extraordinary vocals, lyrical images, and sublime yet simple musical arrangements.

These artists are definitely worthy additions to your music collection. When I play these tracks for my twenty-something-aged daughters, they instantly grab a piece of paper and start writing down  names.

Amy Macdonald and Deb Talan hold the spotlight as artists of the month.

I first heard Amy Macdonald on the radio last spring during a visit to my daughter in Vermont. I was driving the car when one of Macdonald’s songs came on, and since the station I was listening to was fading, I pulled over until the announcer shared the artist’s name.

At age 23, Amy promises years of fine songwriting, acoustic guitar work, and impassioned delivery.  The music from her 2007 debut CD, This is the Life, will make you want to get up and dance as she weaves autobiographic stories about her life as a street musician in Scotland. This is the Life sold well in Europe, but it has not taken hold yet in the U.S. Her spunky, up-beat ballads include the title track, “This is the Life.” In spring 2010 Amy released a new CD, A Curious Thing, but it is not yet available on I-tunes.

Andy’s Picks: Take your Amy Macdonald initiation with these tracks: “This is the Life,” “Youth of Today,” and “Let’s Start a Band.” The musical arrangements behind her acoustic guitar enhance the effects of her heartfelt lyrics. When you hear this well-produced CD, your heart will soar like an eagle!

I’m drawn to their mellow folk-pop harmonies tastefully arranged and delivered. The songs yearn with melancholy themes of love, loss, and renewal. I also like to listen to Meg Hutchinson before or after the Weepies. They definitely share a similar vibration and musical sensibility.

Andy’s Picks: Try these tracks from 2005 and 2008: “Stars” (also check the Youtube video on this one; tears may come), “Just Blue,” “Hideaway,” and “Gotta Have You.” Share the Weepies with your friends.

For a regular dose of female singer-songwriters, tune into Heather Miller’s music and interview show Lyrical Venus Tuesdays 9-10 a.m. on KRUU-FM (100.1). Andy Bargerstock’s Fringe Toast show can be heard on KRUU-FM on Wednesdays at 8 p.m.

How to Train Your Dog: Eddie Pickering Gets Dogs to Behave