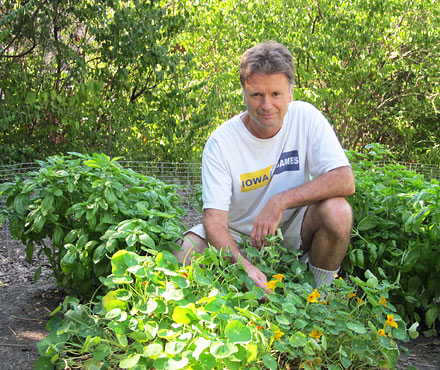 Like most home gardeners, Dave Winningham keeps a relentless eye on the critters who try to steal his vegetables.

Every year more Americans discover the advantages of buying fruits and vegetables at local markets and co-ops. But beyond this burgeoning trend, a select subset of conscious buyers takes the buy-local ethos one step further: they grow their own food.

After all, it doesn’t get any more local than ambling into your backyard, plucking a fresh tomato from your own vines, and slicing half-moons into your Insalata Caprese. Although many pursue these dewy dreams of cornucopia at their doorstep, I was curious to find out what’s on the other side of legume chez moi.

To pursue the truth, I tracked down my friend David Winningham, who finds time to garden after work, drumming practice, playing Ultimate frisbee, and chopping wood. (I got a workout just saying that.) Man may have discovered agriculture 10,000 years ago, but the effort to harness earth’s bounty continues to test our ingenuity. So I set out to discover the secret to Dave’s 1,400 square feet of prime veggie real estate.

“However,” he’s quick to add, “I enjoy planting the more exotic varieties that you won’t find at your local market, like heirloom Brandywine tomatoes, Zucchetta Rampicante squash, and Silver Queen white corn. That’s what makes having your own garden special—you can grow vegetables that you wouldn’t otherwise be able to get your hands on.”

On the road to culinary paradise, Dave admits there have been a few bumps on the hoe. Sooner or later, every gardener realizes that many a guest at your dinner table was not invited. As a matter of fact, these uninvited guests don’t even bother to reach the table. They are more than pleased to sit by your garden and feast right there on your scrumptious veggies, before you harvest them.

Of course, we are talking about rabbits.  They might be cute, fuzzy, and cuddly to the naive gaze of a seven-year-old, but to the seasoned eye of the residential gardener, these quick-footed scavengers are unwanted commoners in the Queen’s country club.

The day the cottontails showed up, Dave’s idyllic garden got its first of many makeovers. Keeping a rabbit away from your garden is a challenge no one should underestimate. Chicken wire was the first shot over the bow, but it quickly turned out to be inadequate. “I tried stiffer wire to keep the wire fence high, but the bottom of the new wire had holes large enough for the other great invaders—groundhogs and possums—to tunnel under and dine on my veggies,” lamented Dave.

That’s when my friend decided it was time to isolate his legume kingdom from the four-pawed hordes of Jefferson County and create a vast and mighty moat around his garden. In other words, Dave went medieval.

The man shoveled an entire perimeter around his garden amidst the great early summer rains of 2011. “Oh yeah,” Dave recalls, “I had these trenches dug and it was pouring down like the monsoon around that time. I kept having to draw buckets of water trying to get ahead before the next downpour. Not the best timing, but once I was in the middle of it, the only way out was through.”

At this point, Dave was all ready to execute phase two of his grand scheme. He trucked in seven tons of pea gravel and a lot of mulch to cover a three-foot-deep barrier. Yet word on the prairie was that Dave’s organic garden showcased many delightful selections that the most demanding snouts coveted, so eventually raccoons made their appearance, too.

“You don’t know how disheartening it is after many months of tending to your corn, eagerly awaiting the time when the cobs will be ripe for harvest, to find out one morning—just before the perfect day to pick them, that a raccoon has not only eaten, but thrashed your eight-foot corn stacks in the middle of the night,” Dave tells me as he narrows his eyes.

I could see it now; the man was on the edge. He scoured the best veggie guerilla techniques to ward off midnight raids, including playing strange music all night, stringing aluminum pans and other objects to rattle when the wind blew, and instituting a varmint relocation program. Still, the bucktooth revelers persisted.

That’s when the electric fence came in. Dave, the gentle organic gardener, straw hat and all, feverishly hotwired the perimeter and hoped that after a jolt of “Welcome-to-Las-Veggies,” the feasting varmints would pull out the ol’ Michelin guide and move far away.

So far, there have been a few mishaps, including when Dave forgets the power’s on and leans on his own fence.

“There’s always something,” Dave says. “I’m a big fan of the Four Season Harvest, by Eliot Coleman, so when I’m not using last year’s compost or making new compost or tilling the soil, I’m keeping the mint from taking over the garden or preparing my own meals. So all in all, organic gardening is a very rewarding enterprise. I highly recommend it.”

Now that’s what I call food for thought.