Fifth and sixth grade boys learn how to assemble a wheelbarrow as part of the Edible Schoolyard program at Maharishi School in Fairfield.

What do First Lady Michelle Obama, Dr. Mehmet Oz, and Chez Panisse owner Alice Waters have in common? They all support school gardens! At a time of soaring childhood obesity and poor eating habits, these three leaders all endorse programs in which kids learn to plant, pick, and prepare healthy foods at their schools. Maharishi School in Fairfield has also joined the initiative and created its own Edible Schoolyard to educate students about healthy food.

Since then, she has made great strides to improve food quality in public schools. Waters discovered that the major hurdle was getting kids to try and eat unfamiliar foods. But she found that when children planted the seeds, cultivated the garden, and even prepared the food, resistance to eating healthy dishes dissolved!

The Edible Schoolyard’s garden classes introduce students to the origins of food, plant life cycles, community values, and the pleasure of working together. The kitchen classes allow them to prepare and eat delicious seasonal dishes made from produce they have grown in the garden. 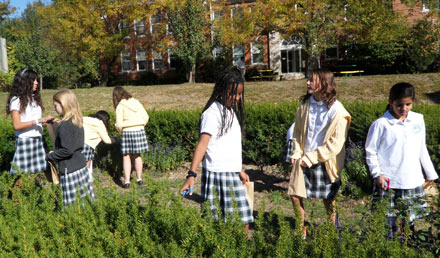 Fifth grade girls pick flowers in the courtyard at Maharishi School in Fairfield.

What inspired you to attend in the first place?
Karen: I’ve always admired Alice Waters and her work in educating people about the value of eating fresh and local produce. We already had the makings of a great Edible Schoolyard program right here, with our greenhouse and courtyard garden, but we wanted to encourage kids to eat the healthy produce that they are growing.

What was especially memorable about the experience?
Laurie: It was like being at summer camp. We all were excited to share and learn from one another, talking about the Seed to Plate programs we were working on back at our schools. And in the end, we didn’t want to say goodbye. We made great friends . . . and, of course, we got to prepare and eat lots of delicious, wholesome food.

Karen: We did some of the same activities in the kitchen and garden that students would do. We had a lesson about the Middle East and made a Middle Eastern lunch. We had pita bread made from wheat grown in the garden. We even ground the wheat for the pita bread using a bicycle that had been turned into a grinder. And we made humus and vegetable dishes with garbanzo beans and vegetables from the garden.

How does the Edible Garden fit in with the curriculum?

Karen: Well, for example, our students recently made sourdough bread. We ground the grain, added the water, and let it ferment. I had to take it home and cook it in my kitchen. In this case, they were studying the pioneers. We talked about how the pioneers took the sourdough mix and carried it across the country in crocks. They cooked it over a fire, and were able to eat the bread while they traveled.

What tangible results have you seen in your students?

Laurie: When children sit at the table and eat together, they culture interpersonal skills. It gives them a sense of family and a chance to share their day-to-day experiences. Many families are too busy to have family meals the way we used to when we were growing up. Nowadays so many kids eat and run, not even tasting what they eat. Their involvement in preparing the food encourages them to actually sit and taste the meal. This helps them enjoy their meal, which is good for their health and helps prevent obesity.

Karen: We’re trying to create a situation where there’s a relationship between the student and food. When children understand that food is the basis of their health, their perception changes. Many families in the U.S. don’t cook. Everything is prepackaged and frozen. Many students won’t eat anything that is not fast food. When children experience planting, harvesting, and preparing the vegetables they’ve grown, they put their hands, minds, and hearts into the food. The garden teaches respect, teamwork, and builds self-esteem, which are qualities that can help children succeed in other aspects of their lives.

What is it that changes their attitude?
Karen: Initially, because kids are kids, they may resist new foods, especially vegetables. For instance, when we picked the cabbage for the coleslaw, one student was sure he wouldn’t like it. But after he worked with other students cutting the vegetables and making the coleslaw, he wanted to taste it. He liked it after all.

Laurie: Frequently, parents tell us, “My child never liked chard, but now he not only likes it, it’s his favorite food.” This comes from nurturing and tending a garden, where children have a connection with the plants and the food they prepare, and of course they want to eat it.

Which grades are involved and what are some of their tasks?
Karen: This week, the first and second graders collected seeds. The third and fourth graders made salsa from tomatoes, green peppers, and other greenhouse vegetables. The fifth and sixth graders made coleslaw from cabbage they picked in the garden.

Laurie: When the kitchen is completed, everyone will be able to use it. We’d like to integrate the garden and cooking into all aspects of the curriculum.

How will the kitchen work as a classroom?
Karen: The kitchen will include prepping, cooking, clean-up, and dish washing stations, where kids can work together in teams. They’ll learn how to cook from scratch, using fresh whole ingredients to make everything from bread and pastries to entrees and soup.

Laurie: All we need is a full kitchen in order to integrate gardening and cooking into our current curriculum, and that’s what the “Seed to Table” program is all about. Last year we won a $25,000 grant from Microsoft Corporation to build our classroom kitchen. We’re still raising funds to complete the kitchen.

I hope you’ll invite us to come see your kitchen. It sounds wonderful!
Karen: Once our program is established, we’ll enjoy inviting community members in as guest chefs to teach various specialties.

Laurie: We would like to serve the community. In addition to traditional cooking classes for our students, we’ll have classes for adults and teach them about healthy cooking for their families. We’re so delighted that the kitchen is under way.