Despite its awesomeness, the comic spy series Chuck has been under threat of cancellation ever since it premiered in 2007, and NBC has finally decided to pull the plug after the current season. But until then, we can enjoy the adventures of Chuck Bartowski (Zachary Levi), the lowly retail clerk who became a superspy when an “Intersect” downloaded amazing skills into his brain. In season five, Chuck has lost the Intersect but started his own spy agency with wife Sarah (Yvonne Strahovski), National Security Agency honcho Casey (Adam Baldwin) and goofy friend Morgan (Joshua Gomez). In a twist, Morgan gets the Intersect, and his newfound powers turn him into an out-of-control egomaniac. In this week’s episode (Friday, 7 p.m.), Chuck tries everything he can to shame Morgan into being his old self, even resorting to pantsing him.

As always, that kind of silly stuff melds seamlessly with poignancy and exciting action. Is there any way we can shame NBC executives into giving Chuck yet one more reprieve? Pantsing them, perhaps? 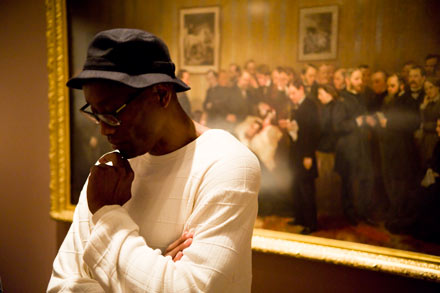 Seven score and eight years ago, Abraham Lincoln was immersed in fighting the Civil War and freeing the slaves. If you had told him that one day an African American artist/intellectual would render his struggles in dance, he would probably think you were a Confederate spy messing with his mind.

In the documentary “Bill T. Jones: A Good Man,” we see acclaimed choreographer Jones grapple with the Great Emancipator’s legacy while creating a modern-dance piece for the bicentennial of his birth. But how “great” was Lincoln, really, especially from the perspective of a contemporary black man? Jones delves into the writings, the debates and the biography to see if his lifelong admiration for Old Abe is justified.

“A Good Man” affords us an up-close look at a genius’ artistic process, with all its doubts and discoveries. It’s not always pretty, but it’s never boring, and I know you will thank me for recommending this documentary.

Unless you’re a Confederate spy messing with my mind.

I never thought I’d be scared of Kelsey Grammer. The genial sitcom comedian is cast against type in this well-written new series about hardball politics, set in Chicago. Grammer plays the city’s mayor, Tom Kane, who works the levers of power with a well-practiced smile. Behind the smile is a ruthless player who gets what he wants, even if he has to resort to physical violence. Grammer deftly switches from public to private mode, offering a creepy portrait of a manipulative modern politician. As if that weren’t enough of an acting challenge, his character also suffers from a degenerative disease that affects the brain and muscles. Yes, Grammer makes that a believable part of his portrayal, too. Who knew the Frasier star had this kind of role in him?

I’ll bet Grammer will now be able land any dramatic part he wants when this series concludes its run. The only thing he won’t be able to do is pursue political office. After watching Boss, no voters in their right mind would support him – and I mean that as high praise.

We Have Your Husband
Saturday, 7 pm (Lifetime)

Jayne (Teri Polo), Eduardo (Esai Morles) and their kids live an impossibly happy life on their Mexican ranch. “I am feeling very lucky,” Jayne says, obviously unaware that Lifetime TV-movie heroines have only about 10 minutes of bliss until everything falls apart. Right on cue, Eduardo is taken hostage by revolutionaries who demand an outrageously high ransom. Jayne has no idea where she can get the money, and her wealthy friends offer no help.

Thus begins an hour and 45 minutes of distress, as Jayne goes through the usual path from helplessness to defiance. But, hey, I’m not complaining. Lifetime knows just how to get you involved in these kinds of melodramas, and Polo makes the emotions feel real. If I didn’t have a pretty good idea of what would happen in the movie’s last five minutes, I might have dipped into my own bank account to help Jayne achieve a happy ending. 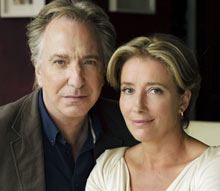 ﻿Alan Rickman and Emma Thompson star in this funny, bittersweet drama based on a poem.

When is the last time you watched a TV show based on a poem? Christopher Reid’s “The Song of Lunch” takes place mostly in the head of a disillusioned London writer (Alan Rickman) who struggles through a lunch date with an old flame (Emma Thompson). The writer’s poetic internal narration is attuned to minute details of his feelings and his environment, and he is acutely aware of why this fateful lunch is going south.

“The Song of Lunch” is the rare TV movie for adults. It doesn’t bother with sexy young actors or a conclusion that ties up every loose end. Instead, it looks deep into an aging man’s troubled soul. The writer is sensitive on the inside but hopelessly crusty on the outside. As unpleasant as he acts toward his confused ex-lover, we pull for him most of the time, knowing that a sympathetic human being lurks in there somewhere. Rickman renders the nuances of this antihero’s psychology, and Thompson establishes a substantial character with minimal dialogue.

We’re used to TV movies that are sweet or, at worst, bittersweet. “The Song of Lunch,” by contrast, is bracingly bitter. I repeat: for adults only.

The Fluoride Controversy | The Facts Call Fluoridation Into Question