On the first day of play, a skeleton crew of only 8 players gave it their best effort on the field: Nevin Shaller, Kayros Arcano, Nate Orme-Johnson, Brian Faulkner, Narayana Winderberger, Joel Price, David A. Navarrete, and Kerry Richard.

Nothing drives home the realization that the joyful season for outdoor recreation has passed than having to wait in line at your local rec center while the clerk processes your $5 admission fee. As I run around the loop that encircles the volleyball and basketball courts, the only thing that keeps winter blues at bay are the pleasant thoughts of the awesome Indian summer we just had.

This year, by pure luck, the MUM Flyers Ultimate Frisbee Club basked in the full glory of that Indian summer. We had just decided to attend one of the Midwest’s autumn competitions and settled on the Western Classic in Macomb, IL, hosted by Western Illinois University. So on a crisp Saturday October morning, having already experienced the first dips into the 40s, we drove out hoping for better weather.

I had managed to crawl out of bed by 5:45 a.m. and arrive at the rendezvous point on time. The huddled lumps on the sidewalk were not my slumbering teammates, but a pile of sleeping bags and equipment belonging to the three players who did show up.

After calling the rest of the team, we took off with just seven of our 14 members. Not the best way to start a two-day tournament, since seven players must be on the field at all times. Had we known we were only taking a skeleton crew, we wouldn’t have committed in the first place. But little did we know that we were headed to the best weekend ever experienced by our little band.

By the time we hit Macomb, the sky had turned into a canvas of unadulterated Caribbean blue. We met up with another player who had left the night before, rounding up the team to a roster of eight players, half of them over the age of 40, all attempting to compete at a college tournament. This was the stuff of legends, a motley crew of outcasts vying for Ultimate glory.

Okay, we thought we could at least win one game.

We started the first game, and before we knew it, we were up 6-0. That team never knew what hit them. With the first game wrapped, we sat back down, pretty amazed at our feat. We had won one game with a squad of seven players and a single substitute!

We played our second game, a little more tired, but our defensive scheme, playing zone rather than man-to-man, worked wonders, and we beat our second opponent as well.

And that’s when the gods of autumn smiled upon us and gave us their first boon of the weekend: we could go to lunch. Who can say no to food? We ate sparingly since we knew we couldn’t sit out a single point on account of overeating. Well, at least we had won two games. We’d give it the good fight in the afternoon, but we were pretty tired already. We headed back to face our third opponent of the day and managed to score another lucky blow by landing a match against a small team.

The afternoon was glorious, with a crisp wind blowing across the field and the green grass gleaming as the sun set on its westward journey. Despite exertion taking its toll, we managed to outlast the third team and win again. By the time the fourth and final game began, half of us were delirious. Mistakes started to pile up. A few players began to feel the first bouts of muscle fatigue as cramps crept in.

It was a battle of wills. Somehow, we just hung on, point after point, until they made one mistake more than we did and we cornered them. They attempted a pass inside their own end zone and one of our players snatched it from the air, winning Universe point. Unbelievable! Unbeaten in four games! First time ever! We were so happy we could have happily died right there and then.

Why? Well, we would be slaughtered for sure on Sunday.

We could hardly make it to our vehicles.  By the time we showered and went to dinner, our conversation revolved around the incredulous notion that the entire team fit around a single round table. We had either won all four games or we had suffered  from sunstroke. No knowing for sure, we ordered pasta.

That night our sleep could not have been perturbed by the Four Horsemen of the Apocalypse. On Sunday, however, we felt like we had been trampled by them. Yet our weekend odyssey was not over.

Another glorious day came forth, gorgeous, unseasonal warm temperatures scaled up to 70 degrees, and the sky once again became an iridescent blue marble. Five more players came down from headquarters to join the unbeaten eight and we prepared for the morning play-offs. 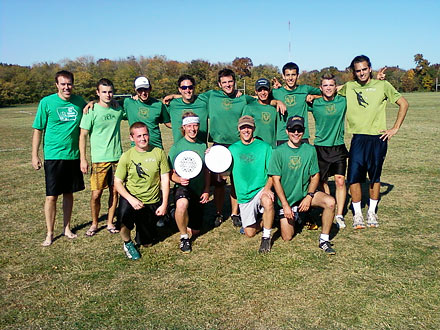 The perfect weather seemed to foretell the fairytale weekend that we were having. We managed to reach the final and were set to face Goliath: the Western Illinois Alumni team, who had the whole crowd on their side.

It was a tough game. They were fast, they were psyched, and they were many. We were giving it our best shot, but fell behind early on. At halftime, we trailed 6-8. Despite the reinforcements, we were pretty spent.

Then they intercepted one of our passes and swiftly scored. The crowd went wild. Their team was up 14-12, one point away from winning the championship. I stood back at our end zone, took my cap off, and laid it on the ground next to one of the cones. It had been an amazing run, yet it looked like we might come up short.

It was time to leave it all on the field for the last round. They pulled the disc to us and we managed to score: 13-14. Now we had to stop them. The winds had picked up and the passes were getting tougher to catch. They advanced down the field, but turned it over! We couldn’t believe it. We took the opportunity and scored: 14-14.

They made another mistake. Then we made one and turned the disc back to them. The crowd sighed and screamed at every pass missed or dropped. Nerves frayed as every exhausted player forged ahead on pure adrenaline.

And then, it happened. We picked up one last turnover and made two quick passes to the near side of the end zone. We scored! The crowd was silent—no one  could believe it. I couldn’t believe it. Yet I was standing in the end zone right next where I left my cap what felt like ages ago, when defeat was but a point away.

I picked up my cap with a sense of wonderment. The autumn deities had smiled on us in the sweetest of ways. We had won this tournament against all odds on the perfect Indian summer day. That’s not a memory likely to fade, ever.

Martha Marcy May Marlene: Mysterious Past | Flashbacks Reveal Disturbing Past of Troubled Sister

Long Time No See: Still Cruising After All These Years