The miniseries Stephen King’s Bag of Bones (December 11 & 12, 2011, 8 p.m., A&E) wastes no time scaring you to death. With horror movies, I can usually keep my wits about me at least through the credit sequence, but not this time, thanks to merciless music, editing and imagery. Pierce Brosnan plays Michael, a bestselling author who loses his wife (Annabeth Gish) in an accident – though “lose” is probably overstating it. She keeps appearing to him in terrible nightmares that I suggest experiencing with your eyes closed and the TV volume turned down really low. (Whoever handled the sound for this production deserves an Emmy in hell.)

Since he’s apparently never seen a Stephen King adaptation before, Michael makes the crazy decision to write his next novel on the lonely Maine estate where his wife had spent time doing mysterious things. Cue ghostly moaning.

I applaud Bag of Bones’ effectiveness while regretting that I’ll have to sleep with the lights on for the next few weeks.

Mark-Paul Gosselaar and Amy Smart in 12 Dates of Christmas, in which a young woman relives the same first date on Christmas Eve over and over again until she figures out what’s up.

Christmas is the traditional time for gorgeous-but-lonely people to find true love in holiday TV movies. Sometimes it requires supernatural intervention, as in 12 Dates of Christmas. On Christmas Eve, misguided Kate (Amy Smart) blows off a date with fellow gorgeous-but-lonely person Miles (Mark-Paul Gosselaar) to pant after her unworthy ex-boyfriend. But a magical puff of perfume in a department store causes her to relive Christmas Eve over and over, à la Groundhog Day. It takes awhile before she realizes that hunky, kind, witty Miles is—duh—the guy for her.

That “duh” is a problem. We know exactly where 12 Dates is going, and there’s not enough charm in the acting or script to make us look forward to seeing the same scenes replayed several times. “It’s like a skipping record!” Kate says.

Right. And remember what a pleasant sensation that was?

My Fair Wedding with David Tutera 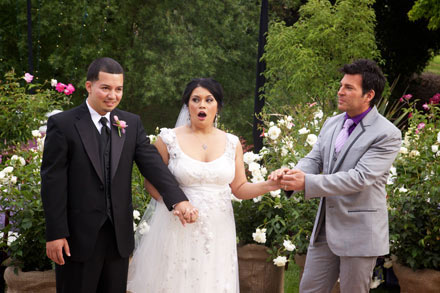 Regina and her groom are awestruck as David reveals his magical makeover, from episode 5 of My Fair Wedding with David Tutera (photo: Chris Ragazzo/WE tv ).

David is comfortable being called “a leading artistic visionary” in his official WeTV biography, and he certainly conducts himself like one—though “visionary” is not a word usually applied to a guy who picks out bridesmaid dresses and party favors. But don’t tell that to David, who keeps referring to “my bride,” as if she’s merely a component in his Sistine Chapel ceiling. During the wedding ceremonies, the focus stays squarely on him rather the bride and groom, and he’s thanked profusely in the toasts.

I’ll admit that the couples seem happy with his work in the series’ new season. But when they look at their wedding albums 10 years from now, I bet they’ll feel a bit strange that almost every shot is of him. 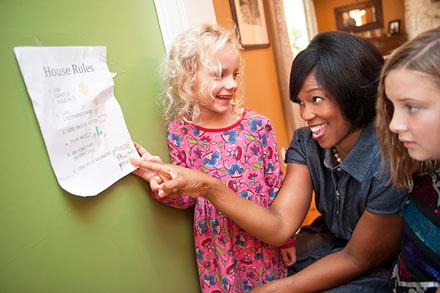 Nanny reality series wallow in misbehavior, with the nanny expressing stagy horror at the chaotic household she’s come to rescue. The nanny is usually a self-aggrandizing British scold, using the series as a commercial for her superior childrearing skills.

Not so with the wondrous Deborah Tillman, of Virginia. In her new series, Tillman arrives at a troubled home in an elegant dress and a warm yet businesslike mood. She doesn’t condescend to the clueless parents or bully the out-of-control kids, but instead sets to work making things right with common sense and courtesy. She institutes techniques like “The Calm-Down Corner,” where kids can get a break from their overheated emotions. Tillman shows a remarkable sympathy for children, no matter how unpleasant they are. And she admits to a personal stake in creating loving parents, given that her own father abandoned her at age 12.

Now you’ll have to excuse me—I must take a break from writing vicious TV reviews in the Calm-Down Corner. 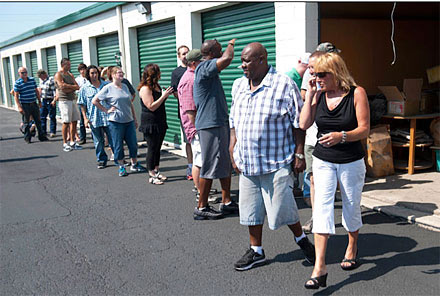 This new series offers all the—ahem—excitement of A&E’s Storage Wars, but now with Texas accents! It comes on all bad-ass in the title sequence, with an electric guitar grinding out slow blues as we meet bargain-hunters nicknamed the Rangers, the Boss and the Outsider. If you’re wondering how the concepts of “bad-ass” and “bargain-hunters” go together—well, they really don’t, no matter how many times our heroes say things like “that’s how we roll.”

The would-be players show up at Texas storage units to bid on their contents, hoping to make a few more bucks than they spend by selling the junk to collectors. For example, one of the “Rangers” waddles up to a storage unit in shorts, black socks, glasses, and a baseball cap, his shirt hanging over his enormous belly. He spots action figures and a copy of Lord of the Rings among the former owners’ garbage.

“These guys were card-carrying nerds!” he cackles.