Dennis Farina and Dustin Hoffman in HBO’s Luck, a a behind-the-track look at the world of horse racing. (photo: Gusmano Cesaretti) 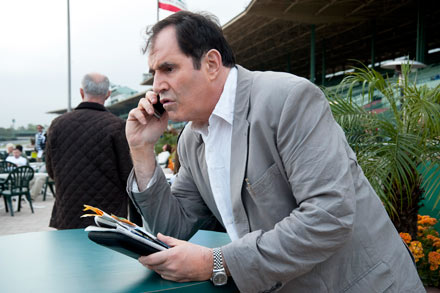 The talent on board is impressive, from Hoffman and Nolte to filmmakers Michael Mann (The Insider) and David Milch (Hill Street Blues). But in the pilot, they can’t get us to care about these awful people. The large cast of character actors don’t do much other than coarsely insult one another, while Nolte and Hoffman compete to see who can deliver his lines in the gruffest voice. Director Mann and writer Milch concern themselves more with the show’s look and mood than with a compelling narrative. So when the big races come, we couldn’t care less about who wins.

Here’s hoping Luck can find better ways to be unappealing over the course of its nine-episode season. 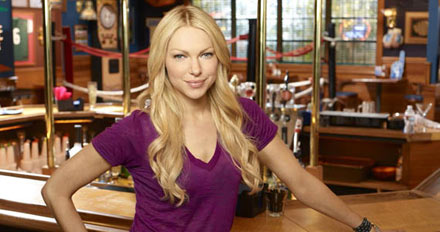 Laura Prepon stars in Are You There, Chelsea? (©NBC Universal Inc.)

This sitcom is based on the autobiographical musings of cable TV host Chelsea Handler, who wears her love of sex, drugs, and drink like a badge of honor. In the series, Chelsea (Laura Prepon) is a hot-to-trot barmaid with a straitlaced sister (Handler, in a bit of cutesy stunt casting) who’s perpetually shocked by her behavior.

Are You There, Chelsea? is the kind of series that expects us to snigger just because a woman says the words “hash brownies” or “dry humping.” Apparently, the filmmakers are unaware that lady comedians have been saying “unladylike” things since Joan Rivers in the 1960s. To make an impression in the age of Sarah Silverman, it’s not enough simply to be naughty; you have to be naughty in a unique or witty way. Here, the jokes are pitched to the small audience that would be mildly scandalized when Chelsea says “I am very influential in the drunk community!”

That’s right—for all its strenuous attempts to be raunchy, Are You There, Chelsea? is a show for prudes. 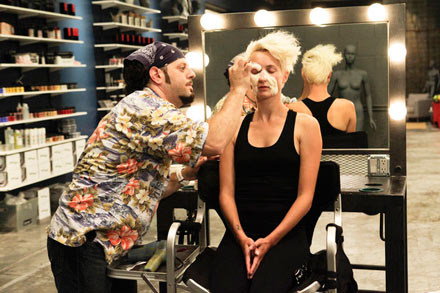 Face Off is a refreshing change of pace from Project Runway, Top Chef, and other reality series where contestants try to make beautiful things. Here, special-effects makeup artists compete to make the sickest mutant or the grossest vampire. When asked to “show us who you really are as an artist,” one guy wows the judges by creating a zombie biker chick with icky green skin, bloody teeth, and her boyfriend’s skull in her helmet.

I’m glad the character wasn’t created in response to “show us who you really are as a person.” Because that would be frightening.

The real-life Gaby Rodriguez had an experience so similar to a Lifetime TV movie that the network couldn’t help but dramatize it. Gaby (Alexa Vega) was a high school honor student who hated seeing fellow classmates treated like dirt if they happened to get pregnant. So she convinced a teacher to let her fake a pregnancy and gauge people’s reactions for her senior thesis. As a piano tinkles contemplatively, she tells him, “I want to prove that even if I did get pregnant, I’d still be able to go after my dreams—that pregnant girls don’t have to be statistics!”

I wonder if a piano tinkled in the background when Gaby delivered that speech in real life.

I find myself in an unusual position: delighted by an award show’s nominations. Unlike the Golden Globes, the Screen Actors Guild has passed over Martin Scorsese’s Hugo and Steven Spielberg’s War Horse, two of the year’s most overrated movies. At the same time, it showers love on my TV faves Friday Night Lights, 30 Rock, and The Office, and offers a lifetime achievement award to the wondrous Mary Tyler Moore for good measure.

If Bridesmaids wins for Outstanding Performance by a Cast in a Motion Picture, I promise I will never complain about awards shows again. Well, at least until next month’s Oscars. 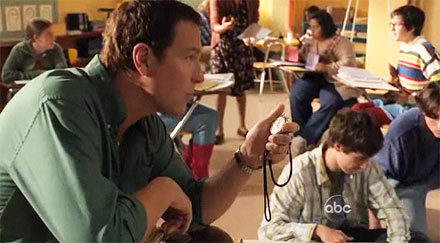 ﻿John Corbett stars in A Smile as Big as the Moon. (©ABC)

This TV movie is based on the true story of special education teacher Mike Kersjes (John Corbett), who had the crazy and beautiful idea of taking his challenged kids through space camp. Everyone tried to talk him out of it, from his colleagues to his wife to the space camp itself. But Kersjes insisted his class could benefit from a science program normally intended for talented and gifted students. “Albert Einstein said the true test of intelligence isn’t knowledge, it’s imagination,” he tells those who believe his kids aren’t smart enough for the program. 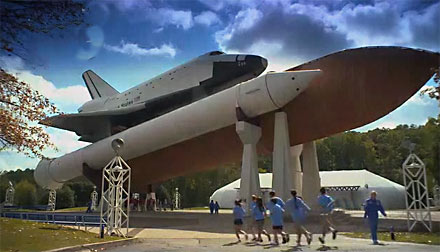 A special education teacher takes his kids to space camp in A Smile as Big as the Moon. (©ABC)

The movie touches familiar heartstrings, but it’s a cut above similarly sentimental productions. Corbett gives a charming performance, as do the young actors who play his students. And the story is just flat-out moving.

You might think A Smile as Big as the Moon isn’t for you, but that just shows a lack of imagination.