Schmidt wants Palin so much that he fails to vet her thoroughly, paving the way for the debacle we all remember. In a subtle performance, Harrelson evokes Schmidt’s mounting despair as Palin blows interviews, distorts her past, and finally goes rogue by putting her interests ahead of McCain’s. When the campaign crashes and burns, she blames everyone but herself. “How the flip did this happen?” she demands, with Moore nailing the nasty note under her chirpy Alaska-hockey-mom intonation.

From this description, you might get the idea that Game Change comes to bury Sarah Palin. In fact, it bends over backwards to humanize her—a radical gesture post-Tina Fey. We’re privy to moments of vulnerability and tenderness, as Palin tries to cope with the media onslaught she clearly isn’t ready for. The movie is as fair as it can be while letting the facts speak for themselves.

And those facts, it must be said, are devastating. By election day, even McCain adviser Nicolle Wallace (Sarah Paulson) can’t bring herself to vote for the ticket after spending three months with Palin. McCain’s team can only survey the wreckage and wonder how the flip they allowed it to happen. 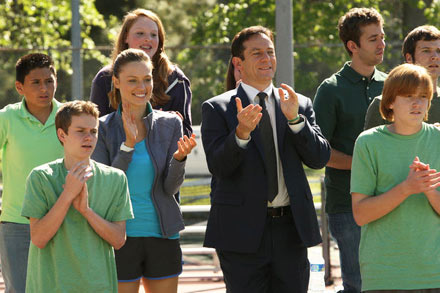 The new drama Awake rivals The Twilight Zone with its reality-bending premise. Detective Michael Britten (Jason Isaacs) wakes up from a family car crash to find that his wife (Laura Allen) has survived and his son (Dylan Minnette) has died. When he goes to sleep, though, he finds himself in an alternate reality in which his wife has died and his son has survived. Each scenario has its own therapist insisting that the current reality is the true one. Meanwhile, Michael investigates crimes in each “waking” state, with help from clues that overlap from his “dreams.”

Needless to say, the therapists in each reality think he’s crazy. Maybe he is.

In a brilliant performance, Isaacs makes you feel Michael’s confusion, pain, and yearning. Awake is downbeat, though somehow not a downer. Like the hero, you feel that you’re trapped between fantasy and reality. And that’s a fascinating place to be.

One thing you have to wonder: Can the series possibly sustain this high concept? After all, the alternate realities of The Twilight Zone lasted only one episode apiece. You can only dream about where the filmmakers are going to take this thing.

Judging from the pilot, though, they have a knack for making dreams come true.

Oscar Hammerstein II: Out of My Dreams
Friday, 4:30 pm (PBS) 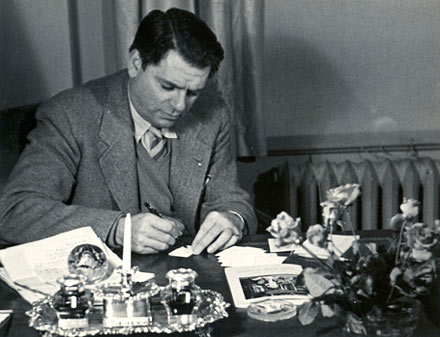 ﻿Oscar Hammerstein, the most acclaimed lyricist and librettist of the 20th century, at work. (Courtesy of Rodgers & Hammerstein)

As someone born post-Elvis, I’ve always had a hard time with the earnest American musical tradition, typified by Oklahoma and South Pacific. I could enjoy a Simpsons parody, but not a straight rendition, God forbid.

However, this tribute to lyricist Oscar Hammerstein II at least gives me an appreciation of the art form. Hammerstein gets credit for bringing realism to the musical – though the clips of manly men with fake mustaches and girly girls with lacquered hair warbling about L-U-V look anything but realistic in 2012. I guess it’s all relative.

In any case, Hammerstein did tackle thorny subjects like race relations, and commentators praise him for allowing his characters the potential for “nobility.” And believe me, nobility is difficult to achieve while wearing a fake mustache.

This reality series delves into the L.A. subculture of wealthy young Persians—the sons and daughters of Iranians forced out of their homeland during the revolution. According to Shahs of Sunset, this cohort is obsessed with money, looks, sex, status, and partying. In other words, with the same things as the folks on many other Bravo reality series.

But to me, Shahs is a cut above. For one thing, it’s much more interesting to learn about Iranian manners and mores than to meet yet another group of familiarly privileged Real Housewives. For another thing, the show’s friends and relatives have a certain obnoxious charm – an improvement over reality subjects who are merely obnoxious. Yes, they’re given to bickering, pampering themselves and bragging, but they often do so with self-aware humor.

“I’m about 98.7% better than any Persian man I’ve ever seen!” says Reza, the outrageous gay guy. He’s the breakout character here, but he has stiff competition from supercilious GG and out-there artist Asa, who describes herself as an “Aries fire-dragon intergalactic Persian princess.”

I proclaim Shahs of Sunset to be 98.7% better than any reality series I’ve ever seen.

Amanda (Leslie Bibb), a mom coming off a disastrous marriage, moves back to her affluent neighborhood in Dallas, where she’s remembered as the high school mean girl. Even though she’s grown out of that, her onetime victims (Kristen Chenoweth, Miriam Shor, Jennifer Aspen, Marisol Nichols) still want revenge. They plot against her in extravagant ways, all while maintaining their public personas as proper Christians. This new series looks for laughs in the contrast between their godliness in church and their bitchiness everywhere else.

If only it had found some. GCB aims squarely for the lowest common denominator, with crude jukes about breasts, gays and fat people. And the sexual politics sets women back to the smutty Porky’s era. Amanda, for example, defies all narrative logic by working in hot pants and a tight T-shirt at a restaurant called Booby-licious.

According to one of Amanda’s enemies, “God hates failure.” If so, he’s really going to have a problem with GCB.

Beginning its sixth season, Army Wives is the most successful series in Lifetime’s history. It’s easy to see why: The men, women, and kids on this Army base are a pleasure to hang out with. Army Wives is a soap opera, but a dignified one, featuring characters who make sacrifices to serve their country.

The season premiere reminds us how tough and resourceful most of them are. Fort Marshall is being decommissioned, meaning the longtime friends (Kim Delaney, Catherine Bell, Sally Pressman, Brigid Branagh, Wendy Davis) must say goodbye. It’s a blow, but these women are adept at handling whatever life throws at them, albeit with occasional grumbling.

One of them, fretting about moving her children, is told that Army kids are resilient. “Resilient!” she snorts. “I’m beginning to hate that word!”

Funny – I’m beginning to love it.