In the premiere episode of Touch, ﻿Martin (Kiefer Sutherland) is surprised at where his son Jake (David Mazouz) brings him. (©2012 Fox Broadcasting Co., Kelsey McNeal)

TV networks have always had a weakness for mysticism, from The Twilight Zone to The X-Files to Lost. The trick is to keep the audience from laughing at you—a trick that the new Touch (Thursdays, 8 p.m., Fox) hasn’t quite mastered. Oh, I admit that the story of a mute boy (David Mazouz) with special powers is watchable, thanks to Kiefer Sutherland’s intense performance as his beleaguered dad. But Touch takes its own mumbo-jumbo so seriously that it’s hard to get through an hour without a few giggles.

The boy is a mathematical genius, and somehow that gives him a supernatural insight into human destiny. He predicts the future and brings together far-flung individuals who “need” to be brought together. Sutherland is as confused as the viewing audience, so Danny Glover shows up to explain it all. (He’s the series’ “magical Negro,” recently ID’d as a preposterous Hollywood type by Saturday Night Live.) Meanwhile, the filmmakers throw in 9/11, Islamic terrorists, a dead child, and any other cheap elements they can think of to raise the stakes.

“Patterns, mathematical in design, are hanging in plain sight,” the boy says in voiceover. “Only a few of us can see the connections.”

The only pattern I perceive is one of TV networks periodically throwing this kind of pseudo-religious hokum against the wall to see if it sticks. 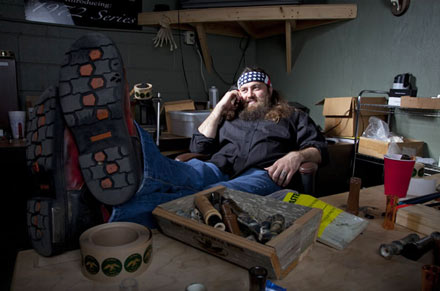 Duck-call entrepreneur Willie Robertson gets a little too uppity for his family in Duck Dynasty. Sounds like must-see TV!

Cable networks are desperately seeking colorful families who pursue unusual livelihoods—exterminators, wild boar hunters, and other eccentrics who can cheaply fill a half-hour of reality TV. In Duck Dynasty, it’s the backwoods Robertson clan, who’ve struck gold by selling their handmade duck calls. The company is run by son Willie, the only family member who’s obtained a bit of education and dedicated himself to modern business principles. The others are unreconstructed hillbillies more interested in hunting frogs than in turning out the duck calls on a tight schedule. Even Willie’s Pappy scoffs at his industriousness. “Willie went off and bought a suit,” he drawls, as if recounting a family tragedy. “He’s a suit man now.”

Pappy seems to have a different notion of “suit” than the rest of us. Willie looks just like the rest of the Robertson men: a huge bushy beard, long stringy hair that’s never seen the inside of a barbershop, and camouflage duds. Nevertheless, the family regards him as a sellout, particularly during a nighttime frog hunt in the swamps. When a huge snake drops from a tree into their boat, Willie jumps into the water to escape.

Pappy can only shake his head in shame. “Too many days in a subdivision. Snakes fall out of trees, you go a-runnin’.”

If I know my American TV audience, I predict they’ll come a-runnin’ to Duck Dynasty. The only people unlikely to be amused are barbers.

This lawyer series premiered in January and lasted about a month in the prime Thursday night slot. An audience never materialized, so NBC moved it to the Saturday soon-to-be-canceled slot—“burning off the episodes,” in TV parlance.

I can see why The Firm didn’t catch on. We’d already read the 1991 book and seen the 1993 movie, so it felt like recycled material from a distant pop-culture era. The tone is relentlessly tense as Mitch McDeere (Josh Lucas) defends clients while fleeing mobsters and jousting with cops. Who could look forward to a year’s worth of that anxiety-producing percussion on the soundtrack?

Then again, The Firm is perfect for an occasional lazy Saturday. If you’re sitting at home with nothing to do, the production will leave you thinking that you’ve had an intense evening of entertainment.

In other words, while The Firm failed as a series, it makes for a strangely satisfying burn-off experience. 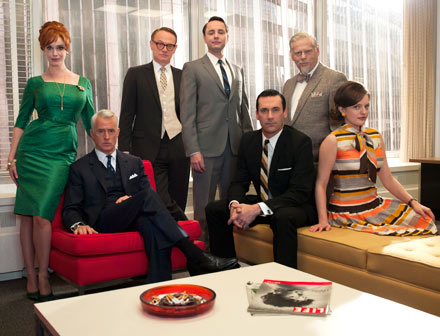 I smell liquor, cigarettes, and hairspray—it must be the long-awaited return of Mad Men after an 18-month hiatus. Season four ended with ad executive Don Draper (Jon Hamm) proposing to his young secretary (Jessica Paré) while 1960s Madison Avenue—with its sexism, infidelity and alcoholism— found itself on the cusp of monumental change. 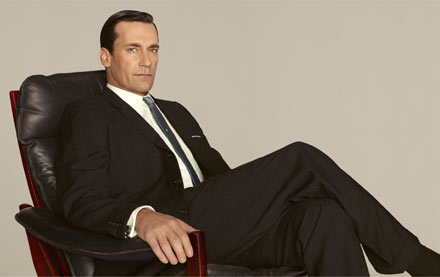 I’m pretty worked up about the season five premiere, but a couple of martinis and a smoke ought to calm me down.

This delightfully sick reality series follows an old-school Hollywood special effects master—the go-to guy for movie monsters. Cleve Hall looks a bit like a monster himself, with his sinister black-rimmed eyes. He calls himself “one of the last of a dying breed,” meaning that he creates movie magic by hand in an age of digital FX.

Cleve is the guy you seek out when you’re producing a horror movie about conjoined twins or a two-headed shark. He goes to work with fiberglass, silicone, foam, and spray paint, making subtle distinctions among his grotesque creations. “This is the kind of situation where I don’t want people to scream,” he says, pointing to a mutilated torso. “I want them to gasp.”

Yes, this is a man who takes his work seriously. And when everything goes right, he’s justifiably proud. Observing one of his monsters, a client says, “That’s a particularly nasty one right there.”