After many summers of watching FACT productions outdoors at the county fairgrounds, Suzan Kessel and Sally Denney decided to do something about creating an indoor performance space.

Suzan Kessel and Sally Denney were sitting in the second row of the Jefferson County Fairgrounds arena on a warm summer’s night. They were leaning back, their feet up on the row of chairs in front of them. The show was over. The arena, dark and empty.

Earlier that day, kids from the 4-H club had brought in their prize livestock for judging at the Jefferson County Fair. And so that evening, through a performance of The Music Man, the unmistakable sounds and smells of penned livestock had wafted through the arena. The year was 1989.

A great undertaking starts with an idea, a desire, a dream. But in the journey towards the final goal, one often takes a path not originally anticipated. On that balmy July evening, to the improbable accompaniment of moos and grunts, a dream for an indoor theater was born, one that over time morphed into something much bigger. For seven years following, during each summer show at the Fairgrounds, Suzan and Sally were drawn deeper and deeper into "the conversation" about a permanent performing arts venue that Fairfield could call its own.

A Shared Love of Theater

Suzan and Sally had served together on the board of FACT (Fairfield Area Community Theatre). United by theater, they came at it from different perspectives. Suzan brought her love of the visual arts, enthusiastically participating in set design and painting. Sally had a deep passion for the performance itself, and since childhood had nurtured a fascination with drama, performance, and acting. 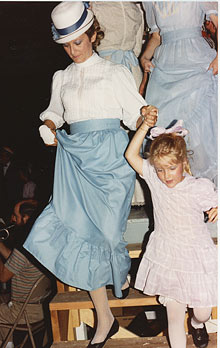 Sally Denney in a 1989 FACT performance of The Music Man at Jefferson County Fairgrounds.

Now, through their mutual vision for a performance space, their friendship deepened. In their growing desire to "make this happen" they found in each other an ally, and had the dawning realization that, in fact, "together, we can really do it."

During those seven years, the two women participated in the many outdoor performances by FACT. Director Scott Slechta put on a host of summer plays, well-known works like The Wizard of Oz, South Pacific, L’il Abner, State Fair, The King and I, Damn Yankees, Bye Bye Birdie, and Oklahoma. 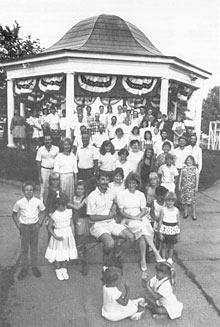 The cast for the sesquicentennial performance poses at the gazebo on the square. It was so popular that it started the tradition of summer performances at the fairgrounds, and later became organized into FACT—Fairfield Area Community Theatre.

But the stark reality was that nature often interrupted the show. Sometimes it was a howling wind. Sometimes a magnificent summer storm. Sometimes a thunderous rain pounding furiously on the arena’s tin roof—causing all stage dialog to screech to a halt.
Clearly, something needed to be done.

A Legacy of Nurturing the Arts

As Suzan and Sally discussed the need for a theater building, they began to envision much more. They imagined a venue for fine arts, club meetings, cultural and artistic activities, and the indeterminate number of community events that constantly cropped up in Fairfield—all the variegated threads that, woven together, make a small town life such a rich and satisfying experience.

Then came a development that brought the dream to life. In 1996, the Fairfield Art Association (FAA) learned that it was about to lose its home in the old Fairfield Public Library building on South Court Street. Suzan, a lifelong artist who served several terms as FAA president, spent many sleepless nights wondering where the organization would move—and if they could even keep it going.

Now, the necessity of the moment propelled Suzan Kessel and Sally Denney into action. Raised in an environment where self-sufficiency is taken for granted, where pitching in is standard operating procedure, and where no one is a stranger, the two women set an entire community in motion.

Their dream inspired a town of people deeply in love with art, theater, music, and culture. In this marvelous community, a collective vision to do something good for Fairfield took shape into a home for diverse activities and organizations to flourish side by side.

But mostly, it is a story of what a small town can do when a dream is shared.

To read the entire series, go to:

Measure & Monitor Your Home Energy Use | The Electric Metric