The black-throated green warbler is a spring visitor in Iowa. These photos were taken in May 2011 by Helen Blake, who saw over two dozen warblers that month.

A troupe of entertainers has come to town. Dancing through the streets. Singing arias to picnickers in the park. Posturing in beautiful and outlandish costumes. Enacting dramas in broad daylight. For a few weeks in May their sights and sounds fill the outdoors from dawn to dusk. They are migrating birds, and Iowa is in their flight path.

May is the peak moment of the year for enjoying birds in Iowa. This is the month when orioles gobble grape jelly at feeders. Ruby-throated hummingbirds mob sugar-water dispensers. Birdhouses are in full production with baby bluebirds, chickadees, and tree swallows.

But to me the greatest delight of May is the flood of wood warblers. Gems among our native birds, wood warblers glow in golds and greens. Some are blue as a summer sky, others striped black and white like a zebra. One, the blackburnian warbler, has a throat of orange fire. And, adding music to spectacle, each warbler sings a song that no other species knows. 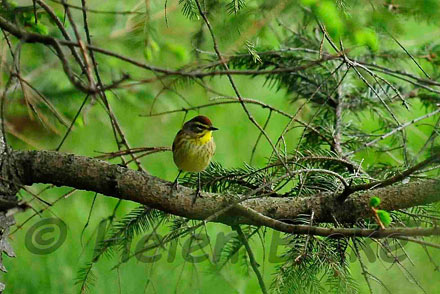 I lived in Iowa for several years before I caught on to the phenomenon of May warbler migration. Warblers are tiny, and most are hard to spot in the foliage. If you’re not watching and listening for them, you can overlook the entire event. But once you’re awake to warblers, a few minutes sitting on your porch in your backyard, or a morning walk with binoculars in a tree-rich park, will put you at the center of the show. Even a glimpse of a warbler in its glory can touch a person with delight.

There are no warblers in Iowa in winter. Most spend the cold months in Central America. When spring comes, 37 species of warblers visit the state. Except for a few, they do not stay to nest. They simply pass through on the way to their breeding grounds far to the north. 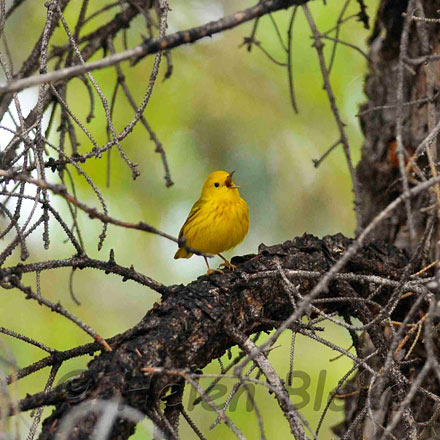 The only chance to see them is in spring or fall, when they’re in transit. In spring they’re easier and more fun to watch, because this is when they wear their most colorful breeding plumage and give themselves away with their songs. Don’t delay. Catch them now. Warbler migration is brief, and by the end of month, it will be over.

The requirements for enjoying the warbler phenomenon are few. Eyes to see. Ears to hear. A pair of binoculars. A bird book, or field guide, or a friend who has one. And the wit to go outside and look and listen during the month of May.

Jefferson County Park is sponsoring a warbler walk at Lacey Keosauqua State Park in Keosauqua on May 12, 2012. Meet at Ely Ford at 7:30 a.m. A sign at the entrance to the campground indicates the road to the ford. For more information, please call Therese Cummiskey at Jefferson County Park, (641) 472-4211.