Around 2,000 years ago, people living near the confluence of the Mississippi and Iowa rivers began constructing burial mounds on the nearby bluffs. The Toolesboro Mounds connect those who hunted the woods, gathered roots and berries, fished the rivers, and grew crops in the fertile soil two millennia ago to the many other mound-building cultures who inhabited river valleys across the Midwest and south dating back 5,400 years.

Over Memorial Day weekend I took the hour-long drive from Iowa City to the Toolesboro site located on IA 99 in Louisa County. The Toolesboro Mound site, created by people of the Hopewell tradition of ceremonial mound builders, comprises seven mounds, only two of which are visible from the Toolesboro Educational Center. The remaining five mounds are located in nearby woods and fenced off.

The Toolesboro site was donated to the state of Iowa in 1963 by the family of George H. Mosier. The mounds were made a National Historic Landmark in 1966 and in 1969 the Educational Center was built.

Though not much to look at, the mounds conceal a vivid account of the lives of the people who built them. Trouble is, early excavations, first by farmers and settlers clearing the land in the 1830s, then by archeologists from the Davenport Academy of Natural Sciences in the 1870s, damaged many of the artifacts, including the remains of the dead. Further excavations have been prohibited because of the sacred nature of the mounds. 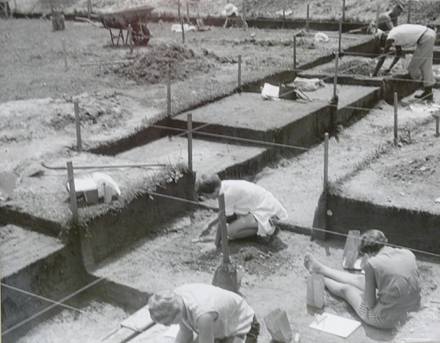 In 1958, archeology students from the University of Iowa conducted an excavation of the Toolesboro mounds.

“The bones turned to dust when they were exposed to the air,” said Katie Walker, a museum interpreter who works for the State Historical Society of Iowa. “The artifacts that survived are in the Putnam Museum in Davenport.”

Walker and the other museum interpreters who work at the Toolesboro Educational Center preside over replicas of the copper tools, pearl beads, stone pipes and tools, and sheets of mica the inhabitants crafted and traded, as well as dioramas, photographs of excavations, and informational placards, including a detailed timeline of site activity since the late 1800s.

The site, believed to have been built by the Hopewell people between 100 BCE to 200 CE, is one of many the Hopewells built across Ohio, Indiana, Illinois, and Iowa. The phrase “Hopewell tradition” refers to a set of burial practices shared by certain Native American groups from roughly 200 BCE to around 450 CE. A farmer from Ohio named Hopewell found some mounds on his property and the archeologist who studied the mounds dubbed the mound builders “Hopewell.” There is no record of what the people called themselves.

There were several regional expressions of Hopewell traditions, among them the Armstrong culture of Kentucky, the Crab Orchard culture of southern Indiana, southern Illinois, and northwestern Kentucky, and the Havana Hopewell culture of Illinois, Iowa, and Missouri. It was the Havana Hopewells who built the mounds in Toolesboro. While only seven remain, it is believed that as many as 12 existed at one time. The largest of those remaining, visible at the Toolesboro Educational Center, is 100 feet in diameter and 8 feet tall. It is thought to be the largest mound in Iowa.

Mound builders had been active in North America since 3,400 BCE, when nomadic people constructed what is known today as the Watson Brake in present day Louisiana. The Watson Brake mounds predate the pyramids in Egypt by 1,000 years.

The Hopewell tradition had an intricate social hierarchy and maintained extensive trading routes throughout much of North America, as evidenced by the artifacts found in the excavated mounds. The burial mounds were constructed for leaders of the communities and personal items were interred with them when they died. Stone, freshwater pearls, shark teeth, grizzly bear teeth, mica, copper, silver, and even human bone were used in carvings, art, jewelry, and everyday tools.

The cultures of the Hopewell traditions flourished until around 500 CE, when evidence of their societies disappear from the archeological record. Mounds were no longer constructed and the Hopewell Exchange trading system ceased. The cause of the disappearance has been attributed to numerous events, such as climate change, war, even a shift from hunting and gathering to farming.

The traces left behind by the various Native American people, Hopewell traditions, and other mound builders reveal an advanced culture.

“We don’t really know how many people lived here,” Walker said of the inhabitants living near the Toolesboro Mounds. “But the amount of work required to hand-build the mounds was impressive. They were likely much bigger 2,000 years ago.”