﻿Matt Lauer talks with Olympic Gold Medalist Michael Phelps about his preparation for the 2012 Olympics on the Today show.

I was put off by the militaristic strain in Beijing’s opening ceremony for the 2008 Olympics, complete with goose-stepping soldiers. But it didn’t dampen my enthusiasm for Olympics opening ceremonies in general. I love the parade of nations, the torch ceremony, the sense of epic dramas waiting to unfold.

Indeed, the whole two-week package for the London Olympics promises drama galore for U.S. fans. Will Ryan Lochte edge out Michael Phelps in the pool? Will the women’s soccer team bounce back from their embarrassing loss in the 2011 World Cup? Will hurdler Lolo Jones erase the memory of her fateful stumble in Beijing? Will beach volleyball duo Misty May-Treanor and Kerri Walsh hold off their younger rivals? Will Venus and Serena Williams be utterly awesome on the tennis court, even in their 30s? 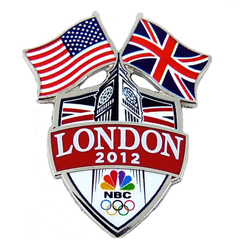 Okay, there’s not much drama in that last question—the answer is “duh.” But expect plenty of surprises in the opening ceremony (Friday, 6:30 p.m., NBC), which includes Paul McCartney, James Bond and several unknown elements. I’m slightly alarmed that the production will be directed by Danny Boyle, known for such creepy movies as Trainspotting and 28 Days Later. Will Boyle fill the Olympic stadium with his trademark junkies and zombies? I might even prefer goose-stepping soldiers to that. 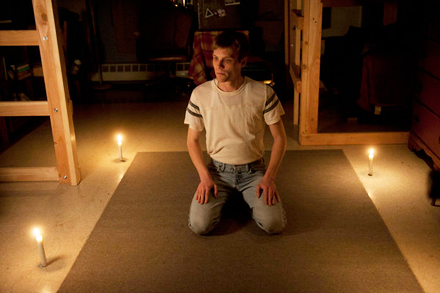 This reality series purports to find paranormal activity on college campuses. Syfy camera crews descend on dorms and frat houses to interview students about ghosts and demonic possession—hey, anything to put off studying for finals, right? The interviews are intercut with reenactments right out of a horror movie, complete with creep-out music and shock effects.

The thing is, anyone who’s been to college will not be too scared by the “paranormal activity” on display. “I walked in the door,” recounts a new sorority sister in an ominous tone, “and it was very, very dirty. Whatever I did, I felt like I was cleaning and cleaning and I never got anything clean.” Ooh, a grimy college residence hall? Call in the Ghostbusters! The women also claim to be freaked out by the sight of strange men in the hallways—again, not exactly an unheard-of phenomenon in a sorority house.

“Suddenly, I felt like something was there,” a student says of a frightening trip to the cellar.

I’d lay odds it was a Syfy producer, staging another bogus ghostly encounter to fill the network’s bottomless need for paranormal reality. 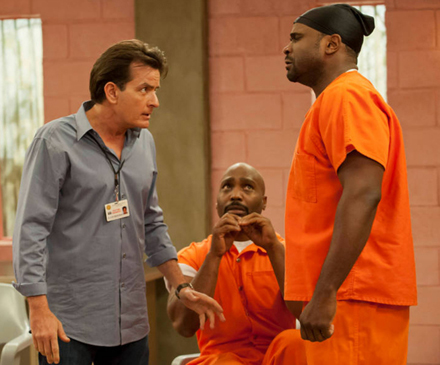 The Anger Management episode airing August 2, "Charlie’s Patient Gets Out of Jail," with Charlie Sheen as Charlie Goodson, James Black as Cleo, and Darius McCrary as Donovan. (Prashant Gupta/FX Network)

I’d make a lousy TV producer, but even I can see that Charlie Sheen screwed up by agreeing to star in Anger Management. Americans gagged when Sheen got himself fired from Two and a Half Men with his obnoxious, self-indulgent, raunchy behavior. The career advice I would have offered from my imaginary TV production firm is to find a role with loads of integrity that counteracts Sheen’s sickening image and reminds everyone he can act – say, a series about a kindly public defender who moves to the Amazon to prevent corporate interests from destroying the rainforest.

Instead, Sheen took a role as an obnoxious, self-indulgent, raunchy anger-management therapist. Sure, it’s bought him a few more minutes of attention – “look, everybody, the train wreck is playing a train wreck!” —but it will do nothing for his long-term career prospects. I predict America will tire of this cynical stunt pretty fast.

Now if you’ll excuse me, I’m off to start my own TV production firm so I can create that show about the kindly public defender in the Amazon. 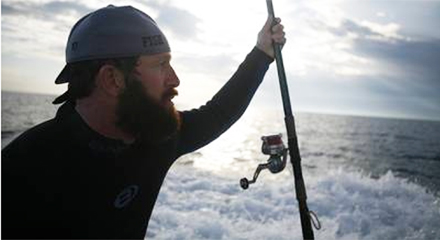 Off the Hook: Extreme Catches (Discovery)

Pro wrestler Showtime Eric Young proves to be an appealing host in this new reality series. Showtime sets out to “fish with the best of ‘em, on their terms.” In the premiere, that means heading to Florida for a damn-fool shark-fishing expedition. If the idea of reeling in man-eating predators doesn’t sound reckless enough, how about doing it while standing on a flimsy paddleboard in the middle of the ocean?

“Will I die doing this?” Showtime asks his local mentor.

“Absolutely, you can die doing this,” he replies.

You may fear for Showtime’s life, but that would be silly. With his bushy beard, raspy voice and muscle-bound physique, he’s a real-life cross between Paul Bunyan and Bluto from the Popeye cartoons. As if in a folk legend, he picks up sharks with his bare hands and kisses them.

Note to man-eating predators: If I were you, I’d stay out of this guy’s way.

In this headache-inducing reality competition, three pairs of players are locked in confinement. As deafening percussion fills the soundtrack, the players must search for maps and keys, avoid security guards, crack codes, and make their way through obstacles. The first pair to break out wins $100,000.

I say The Great Escape is “headache-inducing” because it’s relentlessly tense. If I were a contestant, I’d be less interested in escaping than in finding the source of that deafening percussion and destroying it.