In recent years, Scandinavia has produced some of the world’s most creative new musicians. Two Danish songwriters, Nikolaj Grandjean and Lars Vognstrup, stir up excited audiences in Europe and internationally, yet many in the U.S. are not acquainted with these fascinating artists.

Nikolaj (or simply “N”) Grandjean, who began by penning tunes for popular Danish musicians, now performs internationally with bandmates Mikkel Lomborg and Christian Winther. While writing for Top Pop musicians, N received his first Grammy-equivalent nomination in 2003. A couple years later, while recording with his band Luke in the mountains of Brazil, Nikolaj started experimenting with the recording equipment and even tried his hand at singing. Soon thereafter, on the Luke CD Guaratiba (2006), N displayed his vocal chops in duets with female singer Tanja Thulau, and proved to himself that he could take the lead. Grandjean’s interplay with Tanja sparkles on the tracks “Hurra” and “Take me Home.”

In 2008, Grandjean released his solo debut CD Carrying Stars, containing many outstanding tracks. “Shift to Reverse” begins with be-bop stylized male vocals as an appropriate curtain for N’s reflection on lost love. Unexpected benefits come later as a Peruvian flute casts its spell. From the same CD, “A Shadow” follows as a good companion where love is slipping away. Finally, on “Love Rocks” the potential of deep connection seems to be realized as revealed in lyrics, “What you’ve given me lately is diamonds and good beats laid down softly upon me.”
From this sweet swoon, move ahead to the 2011 CD Fairly Young, where my favorite track is the down-tempo “Every Hour Spent” with subtle electric guitar and male vocal support. In his distinctive style, Grandjean delivers well-paced, almost hip-hop-style lyrics, so subtly exuded that you might swear he is authentically American singing in the style of Jack Johnson. 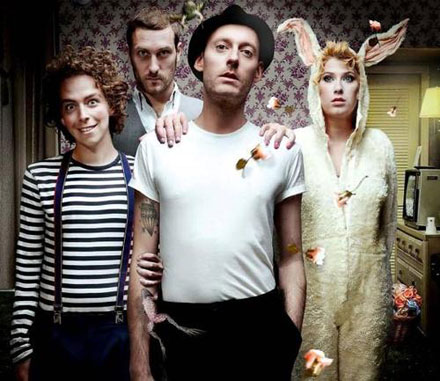 Lars and the Hands of Light

Lars and the Hands of Light

Lars Vognstrup started performing in 1995 as part of a metal band named Raunchy in Denmark. He left Raunchy in 2004 and began exploring different musical styles. When he formed Lars and the Hands of Light in 2009, he proved himself to be a world-class singer-songwriter.  The transition from heavy metal to contemporary lyrical songwriting is astounding.

Now living in Los Angeles, Lars and wife Line (co-vocalist for the Hands) are currently influenced, in my opinion, by the southern California music scene. In listening to their 2010 CD Looking Glass, I hear influences of the Joshua Tree, California, band Gram Rabbit. Interestingly, both bands have adopted a rabbit theme, as evidenced in recent group photos. I can clearly hear them sharing a venue in LA someday.

Lars and the Hands of Light move through up-tempo spaces. Beyond the title track from Looking Glass, I recommend the perky, “Hey My Love, Hey Love!” with Line backing Lars’s vocals. I imagine Line keeping pace with distinctive tambourine in hand. Follow with “Me, Me, Me,” asking a lady to “open your eyes up … to know about me.” After the first verse, guitar, keyboards, and chimes shimmer to create a pleasant backdrop that might entice a young lady to dare to open her eyes. Finally, “Face Your Lover” offers a fitting conclusion to your foray into the music of Lars and the Hands of Light.

The contemporary music scene is loaded with talent. Unfortunately, few people are exposed to the depth and breadth of musicians worldwide. My goal is to scan and retrieve exquisite gems from the deep musical mines hidden off the beaten path. Come back next month for another discovery.