J. J. Abrams’ Revolution (Monday, 9 p.m., NBC) plunges you into an alternate reality. Ben (Tim Guinee) hurries home to tell his wife (Elizabeth Mitchell), “It’s happening.” And then “it” abruptly happens. The electricity shuts off all around the world. We see stunning images of lights going out down a highway, then all around the earth.

Fast forward 15 years, and the world has reverted to a chaotic state. Humans huddle in small clans, armed with primitive weapons. Militias terrorize the countryside, controlled by a warlord named Monroe (David Lyons). Ben’s teenage daughter (Tracy Spiridakos) heads off on a quest to find her surviving uncle (Billy Burke) in hopes of protecting her extended family from Monroe’s depredations. 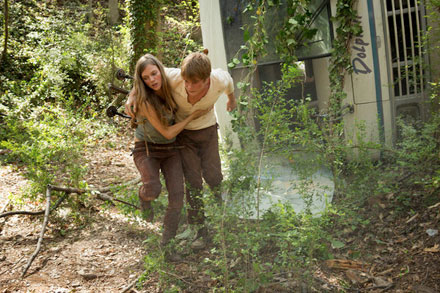 Tracy Spiridakos as Charlie and Graham Rogers as Danny in the pilot episode of Revolution, airing September 17, 2012 (© NBC Universal, Inc.)

There’s lots more to tell, but I don’t want to spoil any of the surprises for you. All I’ll say is: Watch. This. Program. The premise is beautifully thought through, both in the plot and the imagery. The apocalyptic scenario isn’t the downer you’d expect, thanks to thrilling action scenes and a welcome streak of humor. The actors make you care about the characters—though don’t get too attached to any of them, since they’re prone to die or turn traitor on you.

Who knew that the-end-of-the-world-as-we-know-it could be so wonderful? 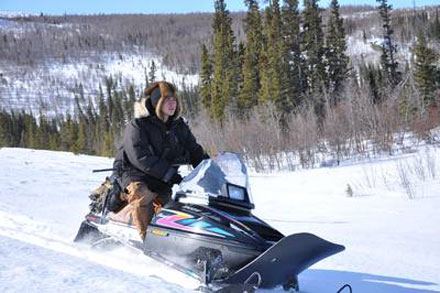 Discovery’s gorgeously filmed reality series ventures into the Alaskan tundra to chronicle a small town’s struggle for survival. The 200 people in Tanana are facing the worst winter in a century, with 60-below temperatures. There are no roads into Tanana, but wolves know how to get there. “Their jaws snap shut at 1500 pounds of pressure per square inch, easily enough to tear a man apart!” explains the sadistic narrator. If the wolves don’t get you, the “monster bears” will. And if you do happen to live to see another day, you can enjoy eating your sled dog for dinner.

As horrible as it is in Tanana, I can’t feel sorry for the residents, who chose to live there. But the poor cameraman who obviously drew the short straw back at Discovery headquarters? Him I feel sorry for. 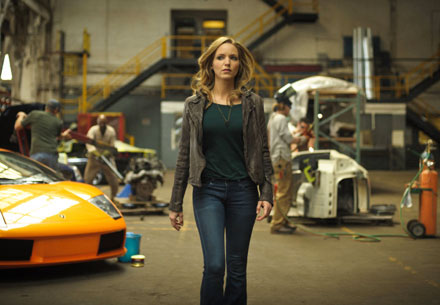 We know viewers like shows about hot single women. They also like shows about doctors and shows about mobsters. Hey, how about a show about a hot single woman doctor who works for the mob? It can’t miss! Grace (Jordana Spiro) is a plucky South Side Chicago girl who became a big-city surgeon, hoping to make a difference. (Sorry, but that’s an exact quote from the script.) Unfortunately, her family is mixed up with mobsters – the kind of TV mobsters who, for some reason, look and talk like characters in a 1930s James Cagney movie.

In the pilot, Grace must decide whether to follow their orders and kill a stoolie on the operating table. As if that weren’t enough excitement for one episode, she also gets in a life-or-death car chase, has sex with a hunky colleague, engineers an illegal operation on a pregnant 14-year-old, and keeps quiet when the mob boss offs a guy right in front of her.

HBO or Showtime might have dug into the moral complexities of this story, but Fox wants Grace to be a standard sympathetic prime-time heroine. In episode one, the network has already hit rock bottom in terms of shamelessness. Which means, of course, that I can’t wait for episode two. 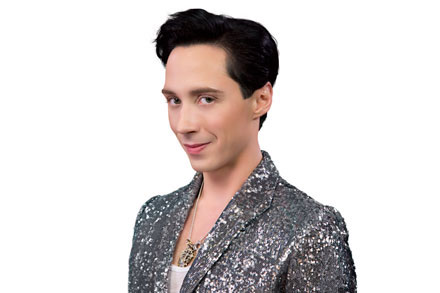 There’s only one Johnny Weir—and he’s back on Logo’s Be Good Johnny Weir.

Johnny Weir, the gay Olympic figure skater, is “feeling really lost” in his reality series’ new season. He’s decided to stop skating competitively and go showbiz as a singer and impresario. This opens him to mockery, even from his own agent. “I hate when people don’t think I’m serious,” he says. “It’s extremely motivating.”

When Weir is motivated, watch out. He has an athlete’s intensity, though he also owns up to his fears. We get close enough to him to share his anxiety—always expressed with sharp wit—as he casts about for something to do post-skating. In short, he comes across as an authentic guy, even in the context of reality-show artifice.

I, for one, think he’s serious. 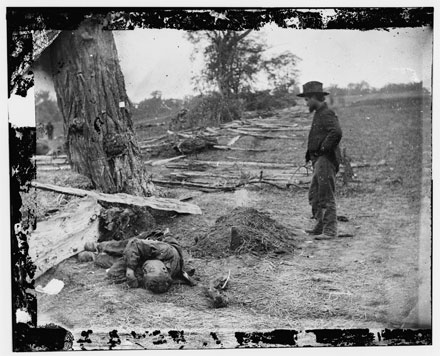 "Death and the Civil War" looks at a grim chapter in our nation’s history: the aftermath of the Civil War. Above, a soldier looks upon a Union soldier’s grave, with the body of a Confederate soldier seemingly tossed aside, in Antietam, Maryland, September 1862. (Courtesy of Library of Congress)

With a new TV season upon us, I’ve been straining to find critical superlatives for the September premieres: “dazzling,” “hilarious,” “a thrill a minute.” In the midst of all the fun, “Death and the Civil War” has the effect of the Grim Reaper at a garden party. This gloomy production tries to bring home “the unimaginable slaughter” of the War Between the States, with the help of mournful music and distressing battlefield images. “Death invaded everyone’s life one way or another,” notes an ashen-faced historian. And now death is about to invade your life, courtesy of earnest documentarian Ric Burns.

I will admit that “Death and the Civil War” is informative. We learn that the carnage forever changed the U.S. government, making it more responsible for taking care of citizens. Public hospitals and federal relief organizations were among the initiatives that sprung up to deal with survivors.

So I guess I need to find a critical superlative for this broadcast, too. Okay, here goes: If you see one program about unimaginable slaughter in 2012-13, make it “Death and the Civil War!”

Easy Guide to Avoid GMOs | When You Shop, It's Buyer Beware!