The large stained glass window rescued from Barhydt Chapel will be installed into its new home in the FACC in October 2012.

One hundred and one years after Barhydt Chapel was dedicated on the Parsons College campus, and 11 years after being removed from the MUM campus for new development, the chapel’s largest stained-glass window is being restored for installation in its new home at the Fairfield Arts & Convention Center. Recently, the pipe organ from the chapel was incorporated into the Sondheim Theater, and now the stained glass will be placed in the Parsons Hall area.

A little over a year ago, an effort was launched to raise $75,411 to completely preserve the window’s main 168" x 150" section. With funds secured in 2011 from a GJCF Grant and a Windows for the Soul Foundation Grant, the project was initiated. 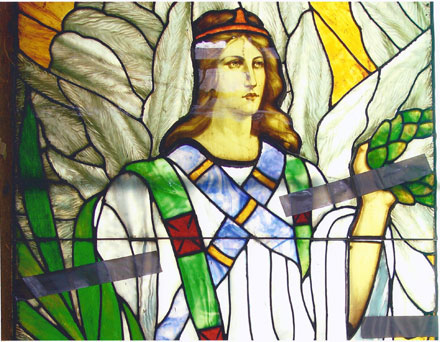 A close-up of the window shows where tape secures the glass until restoration can be completed.

Suzan Kessel began writing an application for a State Preservation Grant, which unfortunately was turned down. "It was a long tedious process," Susan said, "trying to spell out the reason this was an important historical element, documenting with photos, Ledger stories, explaining the scope of the project, budget, and impact. Weeks were spent writing and editing what should be articulated."

But then several Parsons alumni and community members stepped forward with donations, bringing the total needed down to around $38,000. "Early this spring, the state grant opportunity loomed in front of us again," Susan said. "I decided to take the ‘constructive comments’ they gave last year in the rejection letter, and try again. The application process had changed, so almost everything needed to be rewritten."

Over the summer a letter from the Department of Cultural Affairs announced "a REAP/Historical Resources Development (HRDP) grant application was approved for funding $25,000 to the Fairfield Arts & Convention Center." The first half of the payment was received in August, with the remaining amount available upon completion of the project.

The REAP (HRDP) grant must be matched dollar for dollar. The committee working on this project and raising the match is made up of Kessel, Dave Neff, and Sally Denney. Because of funds that were raised earlier, a good amount remains in an account earmarked for this project, so the amount needed to meet the full match and complete the project is only $5000.

"We are hoping individuals that have a strong connection to the chapel or want to keep a significant artifact for future generations to enjoy, will want to contribute," Susan said. "We are so close! This window will be a crowning touch of the FACC, and can be enjoyed from inside of the facility as well as outside. This window is a part of Fairfield’s history and real treasure." 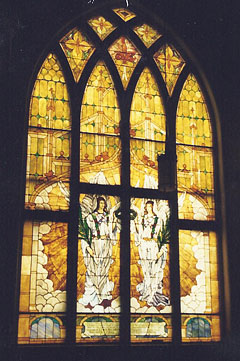 The full window as it originally appeared in Barhydt Chapel.

Bovard Studio reports the angel stained-glass restoration is nearing completion, with final arrangements being made to install it in the large south window of Parsons Hall. The window should be in its new home for an October 101st birthday. Rustin Lippincott, FACC Executive Director, reports a dedication will be planned in the near future.

Fairfield's Co-Ed Theatre Closes After 102 Years | Who Will Bring It Back?