Nellie McKay performs at CSPS in Cedar Rapids on May 5, 2018. (This review appeared in September 2011)

Nellie McKay is one of the great creative musical geniuses of our time. Fans have described her work as a combination of Doris Day with Eminem, or as a female Frank Zappa without the salacious lyrics. While these depictions suggest McKay’s idiosyncratic nature, they do not reveal the depth and breadth of her artistry. She is a gifted piano player, literate songwriter, and exciting performer with a rich and beautiful singing voice. She combines pop music from all eras and genres to create her own personal style. McKay can go from show tunes to alternative rock to modern jazz to rap to funk faster than a Ferrari can change gears, and she does so with a purpose.

McKay’s resume suggests her accomplishments as well as her eccentricities. She starred as Polly Peachum in the Broadway production of The Threepenny Opera (with The Good Wife’s Alan Cummings as Mack the Knife and Cyndi Lauper as Pirate Jenny) for which she won a Theatre World Award. Her music has been featured in movies and television programs such as Rumor Has It, P.S. I Love You, Mad Men, Boardwalk Empire, NCIS, and Nurse Jackie. She was featured on the David Byrne/Fatboy Slim concept album, Here Lies Love. She has released five critically acclaimed records of her own, including Normal As Blueberry Pie: A Tribute to Doris Day, which was voted one of the top ten albums of the year in 2009 by both The New York Times and The Village Voice. When was the last time you thought of Doris Day as hip? McKay revealed the hidden spirit within Day’s oeuvre while being respectful and playful at the same time.

A word of disclosure here. I have been one of the critics surveyed in The Village Voice poll for the last ten years, and I voted for the record. The fact is, I am pretty sure I am the biggest Nellie McKay fan in Iowa, if not the Midwest, or the entire country. I have watched her perform at least ten times in places as different as a church stage on a weekday evening to a rock and roll dive bar at three a.m on a Sunday morning. I have seen her follow such disparate acts as the punk rock grrrl Vagenius (with her spiked Mohawk hair) and genre writer Elmore Leonard, as well as playing alone in a hotel bar and gracing the Broadway stage. McKay has never been less than wonderful.

I have interviewed McKay in person before, and I did the unthinkable. I asked her for her autograph. Journalists are not supposed to do this. We are supposed to be objective, not fans. I have the napkin she signed framed and hanging in my bedroom. But enough about me. 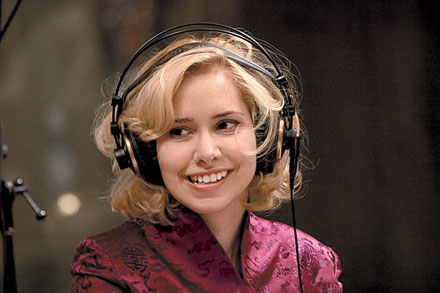 Nellie McKay performs at CSPS in Cedar Rapids on September 27.

McKay’s most recent project is a show about the environmentalist Rachel Carson, It’s Not Nice to Fool Mother Nature, celebrating the 50th anniversary of Carson’s ground-breaking book Silent Spring. The piece has won plaudits from a number of different publications, but unfortunately, she won’t be doing it here. “Oh, gosh,” McKay said over the telephone, “I would love to perform it in Iowa, but I cannot afford to bring the band with me. I will be performing some songs from the show, along with material from my other records.”

While McKay can affect a lighthearted demeanor, she is keenly intelligent and does not suffer fools. She quickly went into a discussion of global warning. “When people think about climate change, everybody thinks about energy issues like solar and wind power, or buying more efficient automobiles, or using different light bulbs,” she said. “But as the recent United Nations summit on the environment reported, what’s on our plates has the greatest importance. Animal farming has more of an impact on our environment than the auto industry.” McKay paused for a second then continued, “But I am not complaining, I hate the cold.”

This exchange captures some of the dynamic of how McKay’s mind works. “I do not want to preach, because that does not change anybody’s mind. I want to entertain people. And maybe then they will listen,” she said by way of explanation. “Some people find this a contradiction, but it’s the opposite. We are wired to think about our fantasies of winning the lottery and acting in a responsible way at the same time. It’s who we are.” McKay did say that if she wins the lottery she will bring the whole troupe to Iowa and perform It’s Not Nice to Fool Mother Nature.

Part of McKay’s concern about animal farming does come from her larger interest in animal rights and social justice in general. She frequently advocates for progressive ideas and lends her name to a number of causes. She has written thoughtful songs addressing food issues, feminism, race, criminality, and other topics that disarmingly make one ponder the topic while appreciating her humor and word play.

McKay considers herself a New York City girl. She does not farm, or even have a garden. “I have a few plants on the windowsill, some basil and a few flowers. I love to get my hands dirty, but I have no desire to tell Iowa farmers what to do. I want to help inform people and let them think for themselves.

“Like most people, I first encountered Carson’s work while a kid in school. Fifty years after Silent Spring her work is just as relevant was it was back then.” She dropped her serious tone and laughed. “I picked Carson because of her hairdo,” McKay cracked. “I pick all my heroes that way.”

But it is clear that McKay is not joking about Carson’s importance to her and the world today. McKay may not want to preach, but she does want to spread the word.