From the provincial scenic beauty of the New England coast to the sweet intensity of first love and the defiance of youth, and from the heavy Hollywood cast with its young newcomers to the unbridled imagination of Wes Anderson, Moonrise Kingdom is a fantasy, a love story, an offbeat fairy tale, and a charming, out-of-the-box comedy that’s not to be missed.

With the screenwriting assistance of film veteran Roman Coppola (son of Frances Ford Coppola), writer/director Wes Anderson (Rushmore, The Royal Tenenbaums) takes us back to the simple but challenging days of youth. In this unexpected tale, two precocious 12-year-olds, Sam (Jared Gilman) and Suzy (Kara Hayward), fall in love and run away together. Sam is an orphan who’s been ruffled by foster homes, and he’s spending his summer at “Khaki Scout” camp where he’s a bit of a misfit. Suzy is a challenging and eccentric child of cerebral lawyers who read guidance books about troubled children in an effort to figure her out. Sam and Suzy are disgruntled and kindred souls, and both are endowed with smarts, audacity, and the spirit of adventure. 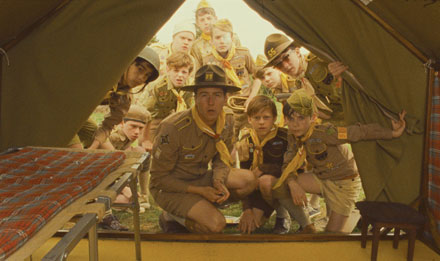 Moonrise is staged in the summer of 1965 on a fictional island off New England. And every scene is laced with the quirky and enchanting touch of its director. Like the way Suzy’s mom (Frances McDormand) shouts to her children through a bullhorn. Like the lean dialogue, the surreal camera shots, and the playful musical score. And the beautiful Rhode Island shoreline where the film was shot. And the perfectly understated performances of Bruce Willis, Bill Murray, Edward Norton, Frances McDormand, Tilda Swinton, and narrator Bob Balaban.

Moonrise Kingdom is intelligently kooky, one of the most original films ever, and maybe Anderson’s best work. What’s unique is that as viewers, we’re observing the story from the vantage points of adults and children, and both are valid. 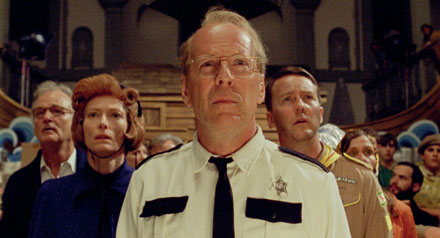 As adults, we know that kids always need supervision, guidance, and protection. But at the same time, we applaud Sam and Suzy for their bravery. And as they dance on the beach in the hideaway cove named Moonrise Kingdom, we celebrate their taste of independence.

The truth is that their bold escape is a cry for help. Children love freedom but not as a steady diet. They want to be taken care of, appreciated, and heard. When these two young people dare to run away, the community bands together and everyone takes notice. Moonrise Kingdom honors that spirit in children to express what they need. And it demonstrates that at any age, anyone can become a better person.   A