LIFE OF PI is the sort of novel that has been begging to be made into a film since it was released. The winner of the 2002 Man Booker Prize for Fiction, and seemingly on half the world’s top 10 lists, it has inspired wonder and debate on a variety of issues, not the least of which was whether or not the story was plausible, even as a work of fiction, or if a certain twist in the story is a cop-out or not. After a long wait, however, the highly anticipated film version has finally arrived, and the results are breathtaking. 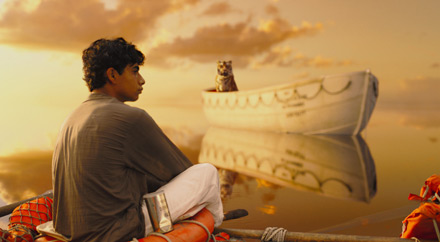 Pi and a Bengal tiger known as Richard Parker arrive at an uneasy detente in Life of Pi. (© Twentieth Century Fox Film Corp.) 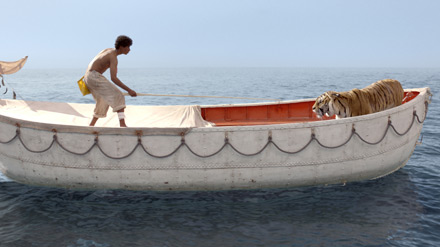 The story centers around a young boy named Pi Patel and his struggle to survive at sea after the ship that is taking him, his family, and their zoo animals from India to Canada sinks. As if surviving such an ordeal is not difficult enough, Pi only has the company of a zebra, an orangutan, a hyena, and a Bengal tiger named Richard Parker. What follows is an unlikely tale of survival that is told from the perspective of a grown-up Pi, played admirably by veteran Indian actor Irrfan Khan (Slumdog Millionaire and The Namesake). 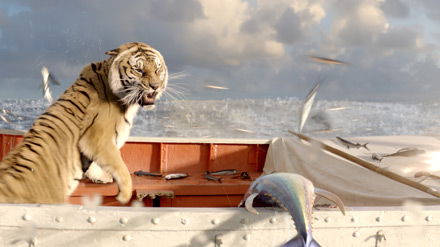 In the hands of director Ang Lee, Life of Pi plays out exactly as you would think it would on the screen, and yet it is so much more than a simple adaptation of Yann Martel’s brilliant novel. Pi’s struggles to survive the storm, food shortages, heat stroke, despair, and myriad other problems are handled with aplomb and great care by Lee. Also, Lee and screenwriter David Magee spend significantly more time on developing Pi’s sense of  God than the already deep treatment given in the book.

The film goes to noteworthy lengths to immerse you in Pi’s journey. For example, a shot of the sun setting into the sea has never looked so beautiful and heartbreaking as it does here because it underscores  how hopeless his situation seems. The subtleties are felt as well, as in a moment of voiceover narration that stops abruptly when the journal entry Pi is writing cannot continue because his only pencil nub finally gives out. 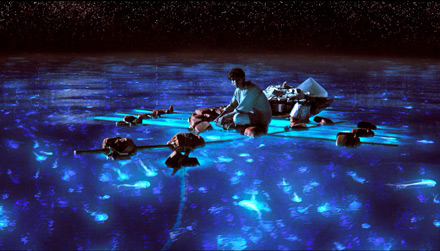 First-time actor Suraj Sharma infuses Pi with extraordinary life. Sharma makes you feel for Pi as he struggles to overcome the loss of his family, the life he knew in India, and even the person he was before all of this happened. Sharma’s performance brings Pi to life in a relatable way, and you root for him to survive this harrowing quest because you don’t want him to lose his humanity.

Life of Pi is a wondrous spectacle that, as Pi says in the film, will make you believe in God. It is also easily one of 2012’s most triumphant films.  A- 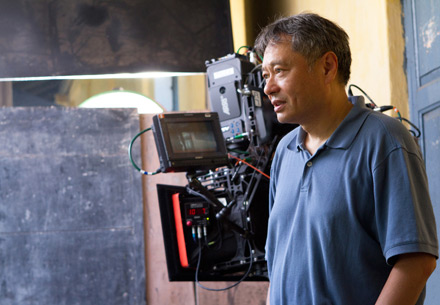 Skyfall: Another Great Bond Episode | Number 23 in the Franchise Portrays a Weary Bond