The windows in Thom Hall’s living room are seven feet tall, two-and-a-half feet wide, and leak air almost like they weren’t there. Hall, a carpenter, designer, and craftsman of exceptional furniture, cabinets, and just about anything made of wood, is vexed by the problem.

“If it weren’t for these windows,” Hall said, “I could heat this place with candles.”

“This place” is the second-floor apartment in the building in downtown Mechanicsville where Hall lives and works. Hall saved the structure from demolition when he bought it in 2000 and has spent the last 12 years remodeling it. He’s completely rebuilt the second floor into a showcase of his talents. The oak floor in the living room he salvaged from a former convent in Cedar Rapids. The asymmetrical kitchen cabinet doors arose from his desire to escape traditional thinking about kitchen cabinet doors. He’s reused frosted glass and metal ceiling light shades as indirect lighting features in a hallway and above the kitchen sink.

One of the few remaining tasks is replacing the windows. With gently arched heads and weighted rope-and-pulley sashes, the windows are like most 50-year-old windows: functional but built without concern for energy efficiency. Rather than simply installing new vinyl windows, Hall has decided to replicate the design.

“I have not yet come up with a good gasketing system for the check rails that I can easily make,” he said. “But I’m always looking for new materials and different approaches to the problem.” 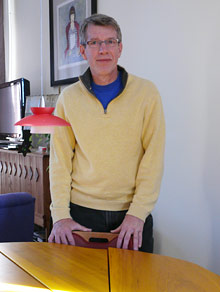 Thom Hall in his apartment

Hall looks for new materials and different approaches for every project he undertakes, whether building custom cabinets, remodeling a bathroom, or designing and building a table. His talent lies at the intersection of art and craft. His work has been on display at the Iowa Artisans Gallery in Iowa City and at Robert Murphy Art Gallery and Supplies in Mount Vernon.

Hall is a native of West Chester, Pennsylvania. He grew up in a family of carpenters and by age 12 was a regular fixture on job sites where he began his lifelong love of working with wood. In the 1970s, as a freshman at Franconia College, in Franconia, New Hampshire, Hall had his sculpture chosen for a one-person show in the art department gallery of West Chester University. Shortly after he graduated with a B.A. in photography and visual arts, he moved to Eastern Iowa.

The range of Hall’s work is staggering. He has reproduced a desk the French government gave to George Washington following the Revolution that would give the experts on Antiques Roadshow pause. He’s done replicas of a Massachusetts shelf clock, period remodeling work on Victorian homes, and custom tables from slabs of mahogany he discovered at one of the lumber yards he used to frequent. Give him a project and he’ll pour himself into it.

Lately, he has focused on more modern, abstract pieces, such as the segmented dining table in his apartment. The piece resembles a flower or a closed camera shutter.

“I’m trying to forget traditional stuff,” he said. “I’m trying to push my imagination as far as it will go. I view my furniture as sculpture.”

Still, Hall understands the limitations inherent in working with clients on a commissioned piece or a remodeling project.

“I enjoy working with people. It’s a marriage of ideas. With remodeling work I spend a lot of time with my clients. It’s like I become part of the family for a month.” As he writes on his website, Thomashallwoodworking.com, “From my point of view, all the constraints must be navigated for a remodel project to be successful. And at the end of the day, there has to be a spark of newness that fits in the puzzle. A puzzle we make together—the client and the craftsman. The whole process is so much more than pounding nails. That’s why I go to work every day.”

With difficult pieces, Hall starts by sketching the design with chalk and eventually builds a prototype out of inexpensive plywood. It’s a multi-stage, time-consuming approach, but the end product is worth the effort. For period pieces, such as a Shaker candle stand, he employs period joinery techniques. The wood he uses for projects must be the right type and the proper moisture level.

It’s the same care he’s using to build his windows. A full-size prototype occupies part of a wall in his shop. He substituted a spring-operated sash system for the old rope and pulley design, but otherwise, the new windows look like the old ones. Hall has no doubt that he’ll solve the gasketing problem and that the ten windows he’ll be replacing will get him one step further to finishing his mammoth personal remodeling project.