One has misgivings about a prequel series based on Psycho, Alfred Hitchcock’s 1960 horror masterpiece about a misfit’s murderous fixation on his mother. But the eccentric Bates Motel (Monday, 9 p.m., A&E) gives you reason for hope, starting with the actress cast as the mother: Vera Farmiga of Up in the Air.

Farmiga has a gift for bringing out a character’s complexity, and Lord knows Norma Bates is complex. On the one hand, she’s a strong, intelligent woman, buying a rundown motel to support herself and her 17-year-old son, Norman (Freddie Highmore), after her husband dies. On the other hand, she has a controlling streak, not to mention a penchant for killing and cover-ups.

Norman takes all this in with his nervous, sensitive eyes. He’s easy to like in the pilot, and the filmmakers toy with our sympathies, just as Hitchcock did. Will this Norman grow up to be a twisted murderer, as in the movie? The series is set in the present, with several new elements, so it’s hard to predict how the plot might change.

For now, Norman is appealing enough to attract girls at his new school. “You’re kind of weird,” one of them says in the pilot. “Weird good.”

If you’ve been following Banshee since January, the season finale will not let you down. TV genius Alan Ball (Six Feet Under, True Blood) executive-produces this tale of a master criminal named Lucas Hood (Antony Starr), who masquerades as a town sheriff in Pennsylvania Amish country. This week’s episode is as exciting as anything you’ll see in 2012-13, as Hood’s former associate, the terrifying Mr. Rabbit (Ben Cross), closes in on him.
In a plot development that amps the psychodrama to the max, Lucas’ onetime soul mate (Ivana Milicevic) – who’s also his former partner in crime as well as Mr. Rabbit’s daughter – must decide whether to try to save him at the expense of her father. I could tell you so much more, but this is one of those times when a TV critic should shut up and let you watch the program.

Just as long as you promise me that you will watch it. 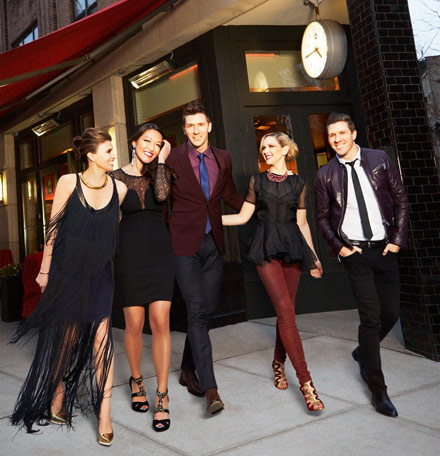 The latest glamorous reality series from E! follows denizens of Manhattan’s food scene. Playing with Fire focuses on achievers like Derek and Daniel Koch, a pair of pretty-boy restaurateurs with huge egos to match their huge ambition; Julie Elkind, a fierce and opinionated pastry chef for the BLT chain; and Anna Boiardi, a Chef Boyardee heiress and pasta maker in her own right. The series is fast-moving and aggressive, just like Manhattan itself, and it thrusts you right into the characters’ conflict-ridden lives.

It’s certainly easy to get absorbed in the drama. Only during commercial breaks do you step back and think: What am I so worked up about? Really, how important is it that BLT keeps pumpkin cheesecake on the menu? That’s a major plot point in the first episode, with Elkind furious after meeting with two associates who are skeptical of her intention to replace the restaurant’s signature dish. “I’m pissed off about how Jamie and Julio reacted to my new dessert ideas!” she howls.

If you’re the sort who considers pumpkin cheesecake a matter of life or death, Playing with Fire is the show for you. See you next episode.

This seven-part series is yet more proof that TV has overtaken movies as a storytelling medium. Writer-director Jane Campion (The Piano) is able to stretch out in the story of a 12-year-old girl who gets pregnant under mysterious circumstances.

Indeed, mysteries abound in the series’ remote New Zealand setting, whose lake is reputed to have a demon’s heart at the bottom (the heart’s beating, legend has it, is what makes the water rise and fall). A detective (Elisabeth Moss) returns home to investigate the girl’s case, forcing her to confront her own haunted past. Meanwhile, a group of troubled women set up camp in the region to undergo therapy with a crazy seer (Holly Hunter).

Top of the Lake boasts poetic imagery, fine acting and a memorable villain. The first episode keeps you pleasantly off balance, unsure of what’s going to happen. The one thing you’re pretty sure of is that the demon at the bottom of the lake will ultimately get his due.

Remember how embarrassed gold-medal diver Greg Louganis felt when he hit his head on the board during the 1988 Olympics? Something tells me his participation in this new reality series will be even more embarrassing.

Louganis will train former Playmate Kendra Wilkinson, former Baywatch actress Nicole Eggert, a Miss USA contestant and other C-list personalities in diving techniques. The series was originally called Celebrity Diving, but ABC wisely changed it to Splash in the absence of actual celebrities.

The network may even have to change it one more time – to Belly Flop.