Syfy boasts that Defiance marks the first conversion of TV and online gaming. The drama will unfold as both a series and a multiplatform videogame, with connections between the two mediums. That’s an intriguing gimmick—but luckily there’s nothing gimmicky about the TV premiere (Monday, April 15, 8 p.m.), which stands on its own as richly imagined science fiction.

We’re thrust into a near future where multiple alien species have landed, fought with Earthlings and transformed the planet. Post-armistice, they maintain an uneasy peace in post-apocalypse St. Louis, which look like a Mad Max landscape graced by a still-standing Arch. Into this powder keg come a roguish former marine (Grant Bowler) and the orange-haired alien (Stephanie Leonidas) he’s adopted as his daughter. Our heroes dream of traveling to the promised land of Antarctica, but financial problems dictate that they first navigate the tricky political dynamics of this multilayered culture.

The pilot is a fully formed world, with a large cast of strange characters and a vast, unfamiliar terrain. Every detail has been thought through, from the aliens’ language (frequently subtitled) to the awful future-Earth music. Best of all, the relationship between the unconventional father-daughter pair has emotional resonance, despite the videogame trappings.

Defiance is highly recommended for members of all species. 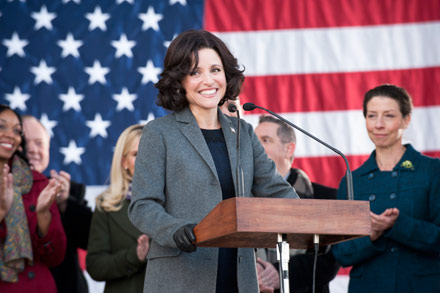 HBO’s political farce returns in full disaster mode. Vice-President of the United States Selina Meyer (Julia Louis-Dreyfus) campaigns for the midterm elections, spouting patriotic cliches. “There is no ‘I’ in ‘freedom’!” she intones with practiced optimism. Despite Selina’s efforts, her party suffers huge losses—but who cares if she can turn the situation to her advantage? She spends the second-season premiere jockeying for position in a chaotic White House, where power is suddenly up for grabs. 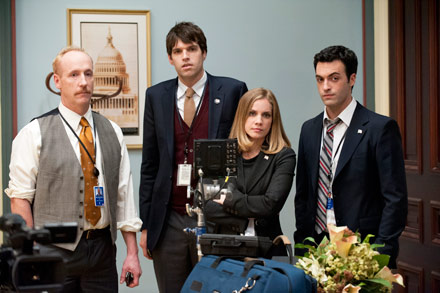 Indeed, jockeying for position is what preoccupies Veep’s public servants—as opposed to, you know, serving the public. They’re all looking out for the main chance. The series’ humor hinges on the contrast between their professed concern (the nation) and their real concern (themselves).

There’s no “I” in Veep. But the implied “I” makes this a cynical comedy for the ages. 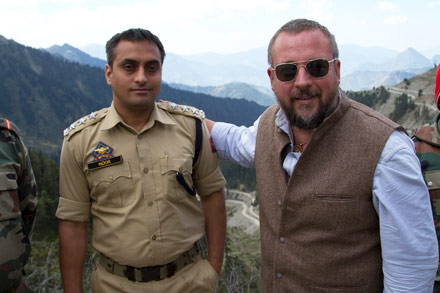 The Vice media organization is known for such nontraditional gestures as Dennis Rodman’s recent “basketball diplomacy” trip to North Korea. Whatever you thought of that stunt – and no sane person thought highly of it – you might find yourself transfixed by Vice’s newsmagazine on HBO. It promises “stories overlooked by the mainstream media outlets,” and this week’s episode delivers just that with a report on North Korean defectors.

Even if a mainstream media outlet covered this story, it probably wouldn’t take Vice’s approach: sending a reporter, translator and camera person along with a North Korean woman on her dangerous journey to freedom. She leaves family behind to sneak into China, falls into the hands of a pimp, then undertakes a trip over Laotian mountains and rivers via underground railroad. We’re right there as she crawls into a shaky boat that will lead her either to prison camp or to safety.

I won’t tell you how the story turns out, except to say that it doesn’t fit our normal categories of “happy” or ‘sad.”

Every year I look forward to the irreverent MTV Movie Awards as an antidote to the pompous Oscars. Unlike the Oscars, the MTV ceremony emphasizes the fun side of movies—and that should make for a fun night of TV, right? Well, it’s time to admit that the broadcast almost never lives up to its promise. The approach is usually more obnoxious than imaginative. And the nonstop hype for upcoming summer movies makes the whole thing feel like a commercial rather than a valentine to the past year’s popcorn movies.

Seth MacFarlane appropriated a signature MTV gag while hosting the recent Oscars: sniggering about boobs. To keep this year’s ceremony a step ahead of the competition, host Rebel Wilson will obviously need to find some other female body part to snigger about.

Ken Burns’ haunting documentary tells the tale of five young men wrongly convicted of raping a Central Park jogger in 1989. It powerfully evokes the problems in New York City at the time, with stark divisions between rich and poor. Black men, in particular, were “an endangered species,” according to one commentator.

The five black and Latino teenagers at the heart of this story happened to be in the wrong place at the wrong time. They explain what happened in contemporary interviews, allowing you to feel their terror. The cops needed to nail someone for the horrible assault that had just occurred, and they wore the boys down in brutal interrogations. After hours of abuse, the innocents were willing to sign any piece of paper just so they could go home, as the cops were promising.

In other words, the endangered species had just set foot in a trap.