Sophie Lowe in Once Upon a Time in Wonderland

A companion to Once Upon a Time, Once Upon a Time in Wonderland (Thursday, 7 p.m., ABC) reinterprets Lewis Carroll’s Alice’s Adventures in Wonderland. Alice (Sophie Lowe) faces a panel of doctors in Victorian England who don’t believe her stories of an invisible cat and a hookah-smoking caterpillar. They consider her insane and propose a treatment that will bring her back to drab reality. Just in the nick of time, the White Rabbit (voice of John Lithgow) and the Knave of Hearts (Michael Socha) appear, offering to spirit her off to Wonderland. How can anyone say no to a rabbit in trousers and a derby? 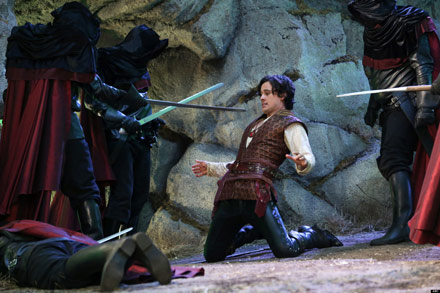 Once Upon a Time in Wonderland

Once Upon a Time in Wonderland is worthy of the “wonder” in its title. Lowe possesses one of the most fascinating faces of the new TV season, with big, sensitive eyes to take in all the strange sights. The cinematography has a hallucinogenic quality appropriate to subplots involving genies and evil queens.

If it’s between drab reality and Once Upon a Time in Wonderland, I’ll take the latter.

In this new drama, an angst-ridden teen named Stephen (Robbie Amell) learns he has extraordinary abilities, including telepathy. He discovers a subculture of similar young folks who consider themselves better than homo sapiens – indeed, they call themselves homo superiors. This good-looking bunch live in an abandoned subway station, hiding out from a group of sadistic scientists dedicated to their extermination.

The Tomorrow People is not a series superior. Stephen is a generic Lonely Hunk With Special Powers. The bland heroes are hard to root for, and the silly villains are hard to root against. We homo sapiens may lack telepathy, but luckily we’ve mastered the ability to change the channel. 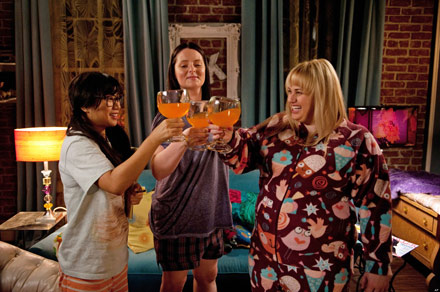 Never has a sitcom title been so inappropriate. Super Fun Night offers no fun whatsoever in its tale of a pathetic nerd (Rebel Wilson) and her equally pathetic best friends (Lauren Ash, Liza Lapira). I think the series is aiming for a female-empowerment message by having these characters stand up to those who would judge them for their looks.

Unfortunately, no one judges them more harshly than their own writers. Super Fun Night is one long fat joke, with Wilson made to strip to bra and panties for cheap laughs.

A true blow for female empowerment would involve the actresses walking off the set in protest. 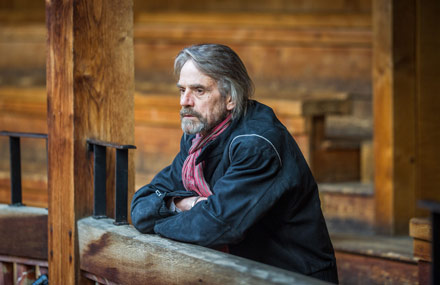 Henry V is the final installment of The Hollow Crown: Shakespeare’s History Plays on Great Performances. It shows the idle Prince Hal of Henry IV maturing into King Henry V, who’s singularly equipped to fight a war with France. The production doesn’t try anything too fancy, all the better to showcase the Bard’s verse. The British cast members speak it slowly, no doubt with unschooled American viewers in mind. But there’s nothing wrong with introducing a mass audience to the joys of iambic pentameter. Plus, these actors are fabulous at any speed.

The French court sneers at Henry (Tom Hiddleston), calling him a “vain, giddy, shallow, humorous youth.” But he doesn’t look too giddy while practicing his archery. With a steady hand and steely gaze, he hits a bull’s eye.

I suggest that Whedon lock the cast and crew in a room with a stack of Stan Lee-written comic books and a DVD of Spider-Man 2. The rest of the season might be salvageable following a period of study and reflection.

Yoga for Depression: Feeling Good Can Be As Simple as Remembering Our Inner Perfection