In 16th century France, the virginal Mary, Queen of Scots (Adelaide Kane), is swept up in palace intrigue. Her fiancé (Toby Regbo) cares less for her than he does for France, nattering on about the political advantage of their union. An evil queen (Megan Follows) plots against her, while her ladies-in-waiting indulge in Elizabethan-style naughtiness. All the French characters worry about English plots, even though, puzzlingly, they all speak with English accents.

The new drama Reign (Thursday, 8 p.m., CW) is basically Gossip Girl in doublets and puffy sleeves – a soap opera about beautiful young people and their transgressive behavior. But it has an advantage over Gossip Girl, in that transgressive behavior was much more dangerous in the 16th century than it is in our own permissive times. Here, if Mary loses her head over some cute guy, she’s in danger of literally losing it. Three cheers for a setting that has a few social rules left to break.

The series is watchable, thanks to all the lovely images of castles and carriages. The loveliest image of all is Mary herself. Even a hardened TV critic can’t help melting at the sight of Adelaide Kane’s dewy eyes, raven tresses and ruby lips. If I were Mary’s fiancé, France would be the last thing on my mind. 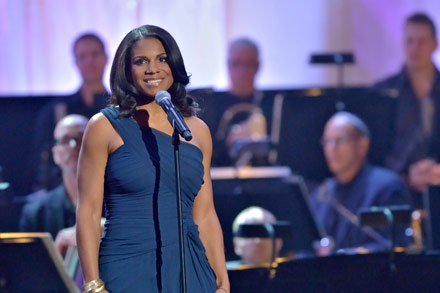 Great Performances takes a night to remember four decades’ worth of broadcasts, from plays to ballets to operas to musicals to symphonic concerts. As Julie Andrews points out, such art forms have no place on commercial TV, making this PBS series quite a public service. Rarely does the phrase "your tax dollars at work" have such a pleasant ring to it.

Audra McDonald, David Hyde Pierce and other guest stars testify that they watched Great Performances as kids and thought, "I’d like to be a performer, too." No doubt a new generation of kids is watching the celebration tonight. I hope I’m around in 40 years to see what it inspires them to do.

Showtime had the brilliant idea of building a series around William Masters (Michael Sheen) and Virginia Johnson (Lizzie Caplan), who began their scientific research on sex in the 1950s. The subject promises plenty of flesh, plus a Mad Men milieu of period outfits and repressed desires. Then there’s the romantic tension between Masters and Johnson. In real life, Masters divorced his wife and married Johnson, so the writers have a surplus of dramatic possibilities.

But so far, Masters of Sex has been disappointing. The acting is wooden, and Dr. Masters makes for a particularly unprepossessing hero. (For some reason, Sheen is directed to stand around looking dazed most of the time.) The biggest disappointment is that the series isn’t sexy, despite strenuous efforts. It’s hard to believe the story of a doctor studying orgasm can’t provide more in the way of naughty thrills. 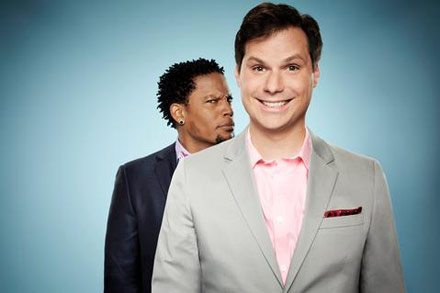 This new game show undermines the idea of the sincere host with all the right answers. Here, untrustworthy hosts Michael Ian Black and D.L. Hughley present contestants with a fact apiece, only one of which is true. If the contestants pick the true one, they win money. It’s all an excuse to get Black and Hughley bantering with each other while making the case for their facts. They’re amusing liars, and often convincing ones. Did Nicolas Cage build a fully functioning Starbucks in his mansion, staffed by two baristas? Black will have you believing he did.

Trust Me, I’m a Game Show Host is a satire of game shows as well as an enjoyable game show in and of itself. It will you help you waste an hour quite pleasurably — trust me.

Stephen Merchant writes, produces and stars in this sitcom about a clueless dork who thinks he’s a player. He approaches hotties in a bar with the line "Hello ladies," then proceeds to make a fool of himself. The hotties slowly edge away from him.

Merchant has impressive credits as a writer/producer of Ricky Gervais’ The Office and Extras. He was also responsible for the less-than-impressive Life’s Too Short. His comedy tends to be cold, cruel and cynical, and without the right context, it’s off-putting in the extreme. Here, Merchant’s character is an unappealing weasel who surrounds himself with even less appealing friends. Like the hotties in the bar, I find myself slowly edging away from him.