As an Orson Welles fanatic, I thought I knew everything about his infamous radio adaptation of War of the Worlds from 1938. The 23-year-old genius crafted the program as if Martians had actually invaded the U.S., with news bulletins seeming to interrupt regularly scheduled programming. Listeners believed the invasion was real, and a national panic ensued. In the aftermath, Welles faced lawsuits, a government investigation, and Congressional censure. 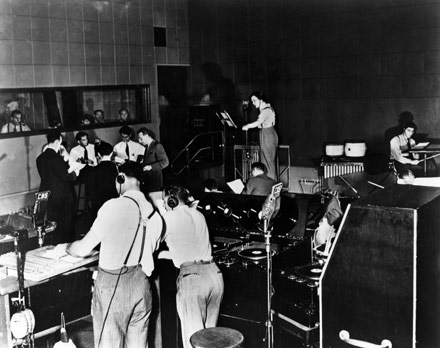 Orson Welles directing a rehearsal of the Mercury Theatre of the Air Troupe (Photo courtesy of Photofest, Inc.)

That’s the part I knew. But the American Experience documentary War of the Worlds (Tuesday, 8 p.m., PBS) does a beautiful job of filling in the historical context. In 1938, prominent scientists still believed in life on Mars. Plus, people had gotten used to hearing the most incredible news bulletins on their radios. Was a Martian invasion more farfetched than the Hindenburg disaster? The Lindbergh baby kidnapping? Adolf Hitler?

In the documentary’s nicest touch, actors in period dress deliver comments from people who were actually fooled by War of the Worlds. Some of them insist that Welles be punished to the full extent of the law, but others congratulate him for pulling off such a brilliant stunt. A lot of Americans, it turns out, appreciated the joke.

Leave it to Orson Welles to make a national panic fun. 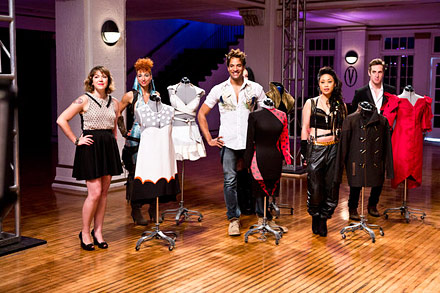 Fashion-design competitions are now a dime a dozen, but Rihanna’s new series has an intriguing concept. It combines music and couture, requiring its contestants to make designs for pop icons. Styled to Rock is not interested in subtlety, but in wild, sexy looks. And speaking of wild and sexy, Rihanna herself appears on set to offer words of wisdom.

The contestants rise to the occasion with out-there clothing heavy on leather, latex, and other elements appropriate for rocking out. "You’re getting zipper-happy over here!" says judge Erin Wasson during a studio visit.

That’s just how I felt after the first episode of Styled to Rock: zipper-happy, with an emphasis on "happy." 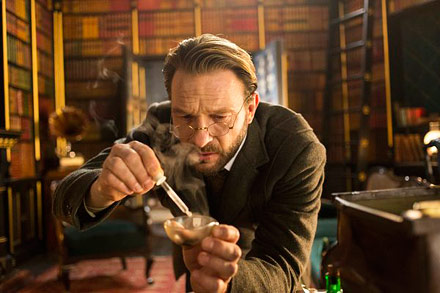 NBC puts Bram Stoker’s characters through their paces one more time, assuming we’ll thrill to the names Van Helsing, Renfield and Harker. Oh, yes, and…DRAC-u-la! Victims rasp out the word after the suave vampire sinks his fangs into their necks. I know I should be scared, but why am I snickering instead?

Maybe it’s because this new drama takes its awful script so seriously. Given the sophisticated modern vampire tales we’re used to on cable TV (Being Human, True Blood), NBC was crazy to think we’d go for this old-fashioned hokum. Dracula (Jonathan Rhys Meyers) struts through the foggy sets, proclaiming his enemies “preening little peacocks.” The pilot features seduction that’s not seductive, horror that’s not horrible. Weirdest of all, it asks us to root for Dracula in his crusade against the late-19th-century oil industry. Say what?

The series is funnier than some of the new season’s sitcoms, albeit unintentionally. Despite my reservations, I just know I’ll tune into episode two to see another preening peacock feel the wrath of … DRAC-u-la!

The latest reality-TV gargoyles are former Louisiana governor Edwin Edwards, 85, and his Barbie-doll wife, Trina, 34. Edwards is a corpulent egomaniac who spends the pilot leering at his young bride. He’s fresh off a 10-year prison term for racketeering, so A&E’s attempt to pawn him off as a lovable teddy bear is an insult to the long-suffering citizens of Louisiana.

For unfathomable reasons, Trina is happy to indulge Edwin’s sexist fantasies, to endure his scornful 60-year-old daughters, and to have his baby. Edwards himself expresses no remorse about his corrupt past, but rather makes light of it. He jokes about going back to prison so he can "get some rest."

In a just world, Edwards would serve another prison term based simply on The Governor’s Wife. If only repulsiveness were a felony.

Launching a decent late-night talk show is one of the toughest undertakings in show business (see Chase, Chevy; Rivers, Joan; Lopez, George, etc.). Pete Holmes has had only minor success as a standup comedian and TV writer, so he brings no star power to The Pete Holmes Show. But he has something even better: a talent for this line of work. To judge from samples released by TBS, the tall, rubber-faced comedian will take an absurdist approach to his skits and interviews, finding the perfect level of silliness. Like his lead-in, Conan O’Brien, he manages to be nerdy and cool at the same time.

The key ingredient here is not cynicism or nastiness, but wit. I hope Jimmy Kimmel is taking notes.