When last we saw Masterpiece‘s Sherlock Holmes, two years ago, he had seemingly jumped to his death as a way of saving his friends. Since then fans have speculated on how he might have survived, and the long-awaited new season of "Sherlock" takes pleasure in teasing us about our obsession (Sunday, 9 p.m., PBS). The series is set in contemporary London, where citizens trade wild theories about the brilliant detective’s demise, just as we viewers have been doing. These include romantic fantasies about Holmes and pathologist Molly, as well as homoerotic fantasies about Holmes and his nemesis Moriarty.

When Holmes dramatically reappears in the season premiere (no, I will not spoil a drop of your pleasure by giving anything away), Londoners do what all of us now do in such moments. They madly take to Twitter, using the hashtag #SherlockNotDead.

Folks, this 90-minute episode of "Sherlock" is as witty, touching, intelligent, well acted and cinematically inventive as any current Oscar contender. It clears the Victorian mustiness from Arthur Conan Doyle’s detective series and makes adaptations like Elementary seem…elementary. The extraordinary relationship between Holmes (Benedict Cumberbatch) and exasperated sidekick Dr. Watson (Martin Freeman) will have you laughing one minute, weeping the next. The filmmakers are wizards who can send up the mythology of Sherlock Holmes (the elaborate deductions, the sense of superiority) while simultaneously immersing us in his latest case, as terrorists threaten Parliament. They render Holmes’ overheated brain at work via slow motion, fast forward, montage, jump cuts, sound effects, zooms and onscreen graphics. The effect is exhilarating, like being inside a human supercomputer.

American Idol clearly needed to try something new, given last season’s off-putting tone and declining ratings. Right off the bat, you can feel the difference. Rookie judge Harry Connick Jr. is decent and smart, and the closest he gets to a Randy Jackson-style catchphrase is "frickin’ great." Jackson himself has been moved from judge to mentor, so we’ll hear less about "pitchiness" and "in it to win it." Yo, dawg, I’m a fan, but for me, for you, it wasn’t working anymore.

Connick has real chemistry with fellow judges Keith Urban and Jennifer Lopez, and so far the emphasis is on talent and triumph rather than dopiness and defeat. If that trend continues, season 13 may well be frickin’ great.

Last season ended with the serial killer Joe Carroll dead and his cult vanquished. But Fox has ordered a new season, so the premiere episode must naturally be called "Resurrection." The violence on display is sicker than it was last year — and that’s saying something. We get a long, lovingly detailed scene about a necrophiliac killer. Then there’s a graphic mass murder in a New York City subway car, with state-of-the-art squishy sound effects.

Former FBI agent Ryan Hardy (Kevin Bacon) has put Carroll behind him after last season’s gruesome events, and at first he shows no interest in an even more perverse round of slaughter. "I want no part of this," he tells investigators. "This is over for me."

As a viewer, I know how he feels.

HBO’s new half-hour drama is about gay friends in San Francisco, and it reflects the way witty urban types talk to each other in 2014. The scenes are low-key and naturalistic, and the actors make the dialogue sound spontaneous. The episode features plenty of sex, too, but it has a "no big deal" quality. This feels like another step forward for TV: accepting guys kissing guys as just a part of normal life.

My only criticism is that not much happens. Videogame developer Patrick (Jonathan Groff) wonders whether he should go to a party, friend an ex on Facebook, and hook up with a guy he meets. Not a whole lot of dramatic momentum there. Still, with scene-making this good, I’m inclined to be patient while waiting for a plot to kick in. 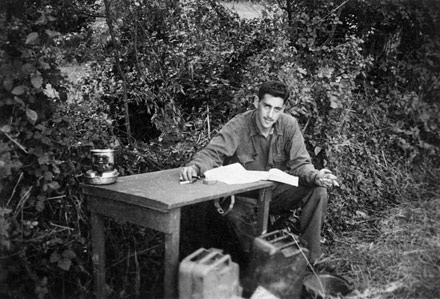 The only photo during WWII of J.D. Salinger writing The Catcher in the Rye. (Courtesy of Denise Fitzgerald)

Critics savaged "Salinger" when it played in movie theaters, but it’s easier to enjoy on the small screen. We’re used to TV documentaries with cheesy reenactments and thin sourcing, so we don’t expect a whole lot more from the two-hour portrait of the mysterious writer J.D. Salinger. Indeed, we’re grateful for whatever information director Shane Salerno happened to find in his decade-long pursuit of Salinger, who hid out in remote New Hampshire in between publishing The Catcher in the Rye in the 1950s and dying in 2010. 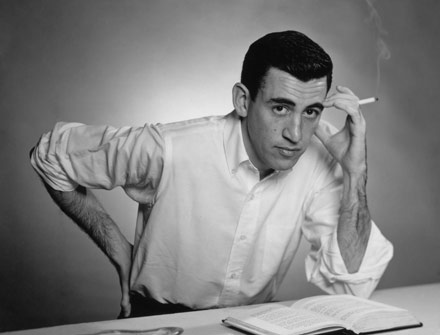 Among the nuggets: Salinger was haunted by his brutal combat duty in World War II; obsessed with innocent teenage girls; devoted to writing even after he stopped publishing in 1965; and contemptuous of Hollywood’s desire to adapt The Catcher in the Rye. He hated Hollywood phonies with a ferocity that recalls his phony-hating character Holden Caulfield. "If they made a movie, Holden wouldn’t like it," suggests interviewee Martin Sheen.

Holden wouldn’t like this tell-all documentary, either, but that doesn’t it mean it lacks value for the rest of us.