On the eve of the Winter Olympics, Lifetime dramatizes one of the greatest stories from the 2012 summer games. Gabby Douglas (Sydney Mikayla, Imani Hakim) became the first African American to win the individual all-around gold medal in artistic gymnastics, while her mother, Natalie (Regina King), offered conspicuous emotional support from the stands. The Gabby Douglas Story (Saturday, 7 p.m., Lifetime) touchingly portrays their relationship through thick and thin.

Natalie was a struggling single mother trying to scrape together the funds to train her sweet little athletic prodigy. Shouting "Mom, look," Gabby had a habit of cartwheeling into furniture and bushes. "Why would you think my shrubs are a landing pad?" Natalie asks, getting the idea that this is no ordinary girl.

We trace Gabby’s highs and lows on the way to the Olympics, and we hear a fair amount of blather about becoming a champion. But it’s worth putting up with a few sports clichés to get to the grand finale, when Gabby compels the entire planet to "look at me." The concluding montage of the real Douglas in action, with " Girl on Fire" blasting on the soundtrack, is the TV thrill of the week. 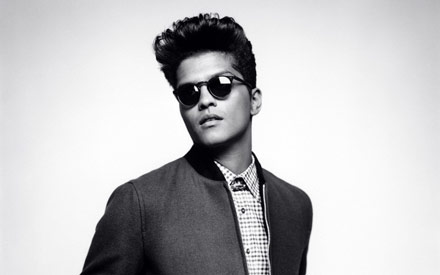 Come to think of it, the Broncos’ Peyton Manning may take everyone’s mind off the music anyway.

Fleming: The Man Who Would Be Bond
Wednesday, 9 pm (BBC America) 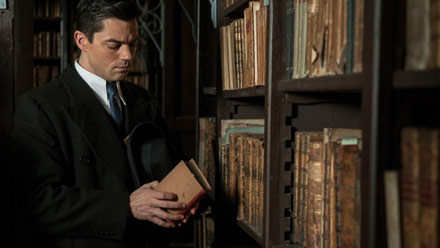 Fleming: The Man Who Would Be Bond

Exotic women fall all over a handsome English intelligence agent  (Dominic Cooper) who likes his cocktails shaken, not stirred. He fights bad guys bent on world domination while tossing off wry double entendres and looking fabulous in a tuxedo.

No, it’s not James Bond, but Ian Fleming, the writer who based his Bond novels on his own experiences. Fleming: The Man Who Would Be Bond dramatizes the true story of an arrogant playboy whose life is turned around by World War II. Joining naval intelligence, he finds the perfect outlet for his talents, as flirting and going to parties turn out to be useful in obtaining Nazi secrets.

The series stretches the truth here and there, but who needs truth when you can have fun instead? Fleming’s superior at the Navy puts it succinctly: "It won’t be boring — life, with you around."

After the controversy surrounding Duck Dynasty, many viewers have been looking for a new reality series about rustic men tussling with regional wildlife. May I suggest Beaver Brothers, which trades Duck Dynasty’s deep-south location for way-north Nova Scotia? In a remote hamlet, Charlie Landry and his down-vest-wearing crew flush out groundhogs, skunks and porcupines from farms and legion halls. They speak with real Fargo accents, substituting d’s for th’s, like dis.

There’s a difference between these folks and Fargo characters, though: a self-aware sense of humor. Charlie mercilessly teases his friends and family, and they give as good as they get. You spend the half-hour laughing with them, not at them — a rarity in these kinds of shows.

In other words, reality TV doesn’t get any better dan dis.

In the season finale of the modern-day Sherlock Holmes series…well, the only thing I feel comfortable revealing is that it will blow your mind. Cancel all other plans for tonight.

Jay Leno is a peculiar TV institution: popular but not quite beloved. The best you can say is that his long stint as Tonight Show host has been amiable. Memorable? Innovative? No, not really.

Leno’s last week on the air, before ceding his spot to Jimmy Fallon, will not be a sensation in the manner of Johnny Carson’s Tonight Show farewell. But it’s certain to be…amiable. Given the nastiness of rival late-night host Jimmy Kimmel, I’ll take it.

"The Amish: Shunned" follows seven people who decided to leave their Amish communities and paid a steep price. Their parents severed contact with them, per Amish law. The victims express their anguish, while Amish true believers explain why shunning is necessary. Believe it or not, they think they’re doing it out of "love." As you try to figure out what abandoning your children has to do with love, the soundtrack fills with melancholy piano music.

The production appears to pride itself on not making judgments. It’s sympathetic to both the Amish and those they’ve shunned — sympathetic to a fault, in the case of the former group. If you cut off your loved ones merely for asking questions, do you really deserve this much respect?

If I’d made "The Amish: Shunned," I would have replaced the melancholy piano with a creepy monster-movie score.

Good People at Riverside Theatre Through February 16 | The Award-Winning Play Explores Social Class, Love, and the Reality of Life in America