Kristian Day, the man behind the newly refurbished Orpheum Theater, has been in the film industry since he was 20, first as a composer and then as a filmmaker and distributor. You may already be familiar with his well-received indie documentaries, Brent Houzenga: Hybrid Pioneer (2010) and Capone’s Whiskey: The Story of Templeton Rye (2011).

When Fairfield’s Co-ed Theater closed in 2012, Kristian saw an opportunity to get involved in a different part of the film industry by opening a hybrid art house/mainstream theater. 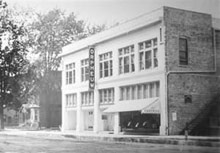 Fairfield’s Co-Ed Theater was originally known as the Orpheum Theater. Kristian chose to return to that original name.

Kristian soon came to an agreement with building owner Chris Johnson to get the theater open again; Kristian would handle converting the theater to digital projection and Chris would renovate the building. The theater, now called the Orpheum, reopened in the fall of 2013.

More than just the name has changed; moviegoers can now purchase wine, beer, coffee, kombucha, and tea along with the conventional movie theater snacks and drinks. The newly renovated lobby features tables and chairs where patrons can dine once the popular Des Moines restaurant Tacopocalypse starts serving food there later this year. 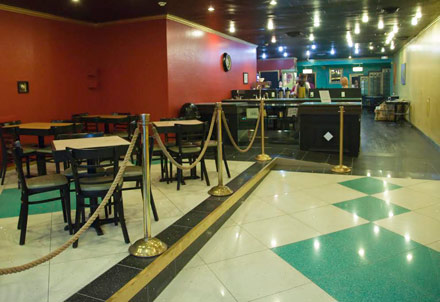 Moviegoers will soon be able to enjoy dinner in the Orpheum’s lobby. Photo by Werner Elmker.

Inside the renovated north theater, with its spacious seating and new stage, audiences now enjoy the kind of mainstream independent films that aren’t often found in small-town Iowa theaters.

Kristian explains that he has chosen not to screen too many blockbusters at this time because they come with strict contracts requiring a theatrical run of at least two weeks and much of the target audience will have already seen it in places like Ottumwa by the time he can get it. Instead he chooses independent films, waiting until they have generated a certain amount of buzz before he screens them so he knows they will be popular with audiences. He also limits the amount of time they run at the Orpheum. "A film in a town of this size cannot be sustained for more than a week," he explains.

Kristian’s long term plans for the Orpheum include renovating the marquee and the south theater. Once he has two screens he may be able to offer more blockbuster and kids’ movies. His ultimate goal is to create a movie theater that makes every demographic feel welcome.

"I want this to be basically the best place in Iowa to see a movie."

See what movies are coming to Fairfield and request the films you want to watch at orpheumtheaterfairfield.com.

What are You Worth? | My Life in an Enclave Where Joie de Vivre Beats Out Cold Cash

After the Snowstorm: Feb. 5, 2014 | Fairfielders Dig Out After a Night of Snowfall