A 10-year-old girl named Bo (Johnny Sequoyah) has extraordinary powers, along with being extraordinarily cute. She can see the future, control nature and even save the world – that is, if the bad guys don’t kidnap her for their own nefarious purposes. At the start of the new series Believe (preview on Monday, 9 p.m., NBC; regular timeslot Sundays at 8 p.m.), Bo’s mysterious overseer (Delroy Lindo) busts death-row inmate Tate (Jake McLaughlin) out of prison to guard her on the run.

"Why me?" Tate asks, trying to understand the strange situation he’s landed in.

He doesn’t learn the answer in the pilot. But we do, and it’s a doozy.

Believe is executive produced by cinematic wizards J.J. Abrams (Star Trek) and Alfonso Cuarón (Gravity), with Cuarón himself directing the first episode. Not surprisingly, it leaves most TV thrillers in the dust. Cuarón creates exciting action sequences with every tool at his disposal: evocative sound, fluid camerawork, dramatic montage. He clearly enjoys the small-screen medium, and his enthusiasm is infectious. Heck, even the villains seem to be having a good time.

The actors are well cast, particularly Sequoyah as Bo. She is believable as both a normal kid and an abnormal specimen. I don’t know if she’ll end up saving the world, but she will undoubtedly save Sunday nights. 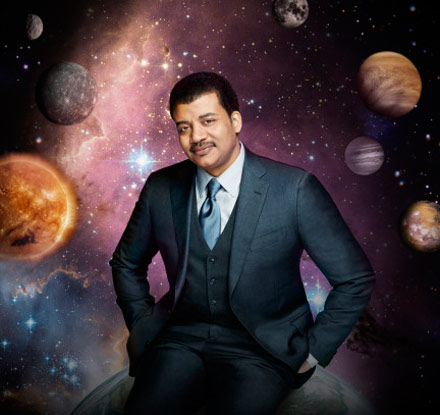 Neil deGrasse Tyson is host of the new series Cosmos: A Spacetime Odyssey.

Fasten your seatbelts for the greatest planetarium show of all time. The 13-part Cosmos is an update of the legendary Carl Sagan series that brought the universe into our living rooms. The new version is hosted by astrophysicist Neil deGrasse Tyson, who has Sagan’s gift for explaining abstruse scientific theories to a mass audience.

But Tyson has an advantage over Sagan: cutting-edge computer graphics. Not shy about hamming it up, he boards a cool make-believe spaceship to take us into the far reaches of space. He dons a pair of sunglasses to observe the Big Bang and puts his hands over his ears when an asteroid wipes out the dinosaurs. His most stunning effect is conveying the vastness of space and humans’ relatively tiny place in it. Rather than making you feel insignificant, however, his presentation fills you with awe at the wonder of the cosmos.

"Now come with me," Tyson says at the end of episode one. "Our journey is just beginning."

I can’t imagine anyone in the known universe turning down that invitation.

A boy (Landon Gimenez) who died under mysterious circumstances 32 years ago returns to life as an 8-year-old, with memories intact. We’re ready to accept this idea within seconds, but the characters in Resurrection puzzle over it for the length of the pilot. It’s tiresome to watch an immigration agent (Omar Epps) and the boy’s mom and dad knit their brows for an hour, trying to come to terms with a simple fantasy premise. At the 50-minute mark, the parents are still waiting for the results of DNA tests to see if the boy is really related to them. You want to shout: "FOR GOD’S SAKE, THE KID HAS BEEN RESURRECTED, SO JUST GET ON WITH IT!"

Even the town preacher is reluctant to conclude that something mystical is occurring. "Things happen in the world," he says tentatively, "that are meant to test our faith."

And shows like Resurrection are meant to test our patience.

Rather than a "reality series," USA calls Chrisley Knows Best a "real-life family comedy." I’d say that’s accurate. The Chrisleys resemble a lot of reality-series clans, with their lavish lifestyle and product to sell (in this case, a new department store in their native Georgia). But these aren’t your garden-variety wealthy, bickering family members. The Chrisleys have a sense of humor about themselves. You spend the half-hour chuckling at their bon mots rather than gawking at their idiocy.

At the center of the series is father Todd, a control freak who monitors his kids’ every move. They tease him about his strictness, and he teases them right back. Todd reserves some of his sharpest barbs for himself, acknowledging his over-the-top childrearing style.

"There is a method to all this crazy," he jokes.

To judge from the rebellion in the household, I’m not sure the method is working. Nor do I want it to, given how funny the Chrisleys are when the "crazy" really gets rolling.