That’s right, folks. From the “deepest small pond you’ll find anywhere” (according to Smithsonian magazine)—a little bit Music Man, a little bit Field of Dreams—comes a weekend festival with a dazzling array of national, regional, and local musical talent, great vendors and food, a sustainable focus, a writers’ and artists’ track, and much more.

From the Ground Up

How did such a major festival suddenly appear in southeast Iowa?

“It’s remarkable, but it’s vintage Fairfield,” says Fairfield Mayor Ed Malloy. “Fairfield is the city of a thousand passions and FAIRfest is a passion that is quickly rising to the top as one of the things that we do to celebrate community.”

A few years ago, when the solar-powered community radio station KRUU FM was approached about creating an annual event, it was hard to imagine this mostly volunteer organization executing a venture of this scope. But the success of the inaugural event provided proof of concept. On the eve of FAIRfest 2013, Iowa State Bank officer and civic father Dave Neff told FAIRfest organizers, “People have talked about doing an event like this for over a decade and you’re doing it. Congratulations!”

“We’re used to flying by the seat of our pants, shoestring budgets, and managing a lot with a little,” says KRUU station co-founder and event organizer Roland Wells. “The operations team is top-notch and a core of dedicated volunteers pulled it off.”

Accordionist Glenn Hartman of the New Orleans Klezmer All-Stars, who headlined FAIRfest in 2013, will be returning this year with some special friends. “I can’t wait to get back to Iowa,” he said. “It was an absolute blast last year. The hospitality, the warm reception we got from the music listeners, and the hosts of the festival were just beyond what you come to expect playing a lot of gigs these days. . . .”

Bringing a little bit of New Orleans to Fairfield was one of the original concepts of the FAIRfest organizers. Towards that end, this year’s headliners include Los Lobos and Rebirth Brass Band.

“Los Lobos is a band very close to my heart,” says Hartman, “because they took a folk music—Latino music—and brought it into the commercial mainstream, staying true to their roots. . . . You’re talking about some of the best and most talented musicians out there. ” 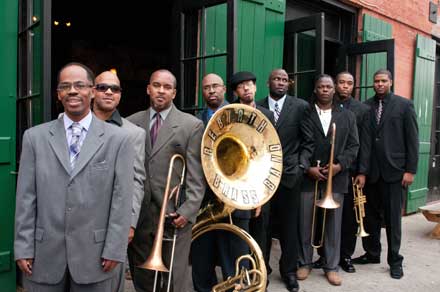 Rebirth Brass Band performs at the main festival stage at 8:30 on Saturday night.

In the New Orleans tradition, Rebirth Brass Band will be leading a second line, made up of those who follow the band (called the “main line”) to dance and enjoy the music. Everyone is welcome to join in on the homegrown “toot your own horn” parade.

The weekend will present some 40 bands over three days and nights on three stages, plus speakers, a beverage garden, and the Solar Traveller II from I-Renew.

The free three-day event will be centered around the Fairfield Arts and Convention Center. Other area venues that will be showcasing music include the Arbor Bar, Red Rock, and Café Paradiso.

Fairfield is an intimate, eclectic community with its own tradition of arts and culture, civic pride, unusual range of cuisines, international university, and a focus on sustainability. Fairfield has a lot of fabulous events, but this citizens’ initiative is designed to celebrate the best of Fairfield and Iowa, enticing friends, family, and out-of-towners to explore this neck of the woods.

“Fairfield is unique in that it feels like a place kinda close to the center of what we’re all trying to accomplish,” Hartman says. “I don’t know how you have all managed to achieve that there, but you’re like a shining light. I mean, there’s not that many places in the United States where you feel as welcome.”

Bodies of Evidence: Reckless | Lusty Lawyers Strip to Their Briefs in Reckless