Written and directed by Jon Favreau, who also assumes the leading role, Chef is about Carl Casper, a divorced chef who does daily battle with the restaurant owner (Dustin Hoffman) as he lobbies for a more creative menu instead of sticking with the same old safe routine. Set in Los Angeles, and followed by Miami, New Orleans, and everywhere the food truck takes them, Chef is a savory journey that’s as light as a soufflé about cooking and family and friends, and of course, being true to oneself. 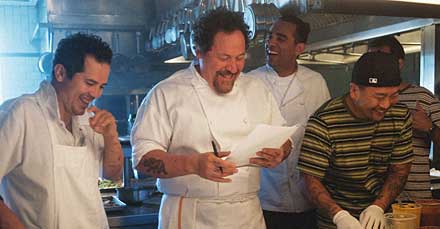 But once the story gets rolling, Chef faces off with a structural problem. It loses the fundamental ingredient—the big push-and-pull—that engaging storytelling is built on. While some movies make us think: What else could possibly go wrong? Chef makes us wonder what else could possibly go right. Some added road blocks would have given this movie more substance. But don’t let my ranting stand in your way of a good entertainment feast. Chef offers up some easy-going summer fare for the whole family. RATING: B

Take My Husband ... Please in "Married" | A Woman Orders Her Spouse to Fool Around in Married