At first glance, Jersey Belle (Monday, 9 p.m., Bravo) comes on like one of those housewife reality series everyone loves to hate. Jaime is a brash Jersey girl with an Italian/Jewish heritage who follows her husband to a high-society suburb in Alabama. You brace yourself for the usual inanities, but Jaime proves an unusually interesting subject. She’s smart and perceptive—a rarity in this genre—and offers a running commentary on the strange little subculture she finds herself in.

The Southern belles don’t know what to make of this straight-shooting outsider who can see right through their Stepford Wives routine. “I know that beneath the permanent smiles on all these chicks’ faces, they have real issues just like everybody else,” Jaime says.

Naturally, you expect catfights—the raison d’être of this kind of show. But Jaime surprises you by befriending her new neighbors and sticking up for them with Jersey-style ferocity. “Jaime on your side is the most amazing ally in the world,” says one woman.

You can criticize me all you want for loving Jersey Belle. I don’t care—I know Jaime will have my back. 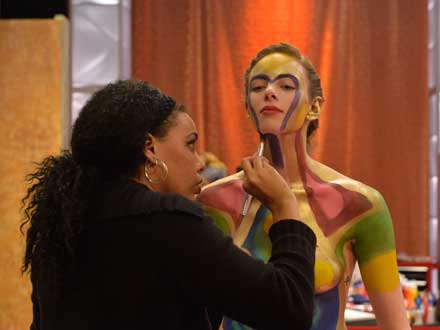 This new reality series immerses us in the eccentric subculture of body-painters. Ten top-level practitioners vie for $100,000 in an elimination challenge, hand-painting and airbrushing their “canvases” — aka naked women. I’ve never taken body-painting seriously, but that all changed when a contestant named Shannon evoked the entire state of Florida on her model’s body, with a sexy female figure painted on the back, foliage on the shoulders, flamingos on the upper front, and a ferocious alligator moving through the state’s, um, fertile nether region. Honestly, you’ll feel like you’ve taken a trip to the southeast.

In short, the series is an unexpected delight. The contestants comport themselves like real artists rather than bratty reality stars. The paintings are often compelling, from surreal sunsets to spooky sea creatures. And the statuesque judges — Rebecca Romijn, RuPaul, Lynda Carter — are gorgeous canvases in and of themselves.

I plan to stay home every Wednesday night to watch Skin Wars, though I am feeling a sudden compulsion to visit Florida.

I like some of Steven Soderbergh’s movies (Traffic, Oceans Eleven), but The Knick is his second dud in a row for cable TV, after Behind the Candelabra. The series is set in a financially troubled New York City hospital in 1900, and Soderbergh successfully makes us feel how depressing life was back then in terms of health and human relations.

That’s not a compliment.

The first sign of trouble is that our hero, Dr. Thackery (Clive Owen), is unbearable. He’s a pasty-faced drug addict and a jerk, and he also proves himself a racist when an African American surgeon (Andre Holland) joins the hospital staff. We not only have to put up with Thackery, but also to watch his primitive operations in gory detail. Before one such scene, he ominously announces to fellow doctors in the gallery: “I intend to inject a 2% cocaine solution directly into the patient’s spinal canal!”

At least The Knick has the courtesy to issue a warning. I’d take the hint and change the channel.

Whoever thought of teaming buttoned-down Kelsey Grammer (Frasier) and loose-cannon Martin Lawrence (Martin) in a sitcom must have thought he was a genius…until he saw the first rehearsal. The veteran comedians have zero chemistry as mismatched lawyers who go into business together. Granted, the script is a handicap, overdoing the annoyed looks from Lawrence and the groan-worthy punch lines from Grammer. But the stars themselves look tired, as if they had only enough energy to pick up their paychecks.

This reality series follows the band Kiss’ efforts to start a Los Angeles franchise in the Arena Football League. I’ll grant you that’s a weird premise, but hey, it’s the dregs of August, and I’ll watch anything that promises entertainment value. Who better to entertain us than Kiss, the costumed provocateurs who vow to “rock and roll all night and party every day”?

But I’m sad to report that 4th and Loud has no rock ‘n’ roll energy and not even much football excitement. It’s really just a boring business story. Kiss’ Paul Stanley and Gene Simmons join a bunch of old bald guys in a boardroom to talk about sales; then they trade corporate jargon with their co-owner, nattering on about “the brand.”

Don’t go near 4th and Loud unless your idea of “partying every day” is attending a marketing seminar.

Legends: Who Am I This Time? | An Unstable Agent Creates Multiple Personalities in Legends