When you meet Ernie Hinkle, a man who has lived 90 years on this earth, you find out pretty quickly that he has stories to tell. In his well-worn jeans and suspenders, plaid shirt, and Fesler Auto Mall cap, he is chatting with a teenager when I approach his table at the Fairfield Farmers Market. While his face is remarkably free of wrinkles, his hands are a sculpture in clay, swollen from arthritis and hard work, dirt embedded in the cracks of his skin.

Sometime in the gap between handing him the cash and adding his persimmons and pears to my bag, Ernie starts spinning a yarn.

“As a young man, I traveled the Midwest performing in showboats and vaudeville acts.” As if to prove it, he opens his mouth and belts out “Old Man River” in the middle of the market.

The Adventures of Ernie

I’ve made a point of visiting Ernie at the market ever since. He once was the “long-time, old-time mayor of Birmingham,” the small town south of Fairfield where he has lived and farmed for 56 years with his wife, Betty. Ernie confides with a sly smile that some rowdies might not have liked him as mayor, “because I don’t put up with much nonsense.” 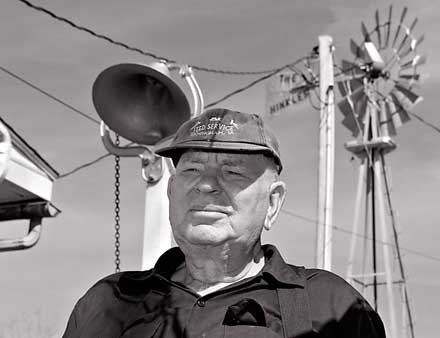 A colorful personality known throughout the state for his performances in charity shows and fundraisers, Ernie was inducted into the Beard-Growers Hall of Fame in Eddyville for his annual green St. Patrick’s day beard and his red, white, and blue sesquicentennial beard. Not to mention 56 years of playing Santa in Sunday schools in Birmingham and Fairfield.

As a salesman for Iowa Tire in Fairfield, Ernie made many friends while driving his long route throughout southeast Iowa and northern Missouri, often raising money for families in need and more than once saving the lives of motorists who crashed on the highway.

He wrote about his adventures in The Travels of Ernie Hinkle. “The big boys didn’t want to fool with it,” he says, “So we self-published under Ernbet Press. Then the United Press picked up the story, and people all over the country bought the book.”

In 2013 Ernie was honored for being a founding member of the Fairfield Farmers Market, which consisted of five vendors when it started back in 1975. Born in Montana and raised on farms in the greater Fairfield area, Ernie knows the old ways of farming, before chemicals and pesticides, and he’s been raising crops organically for the last 25 years, “because that’s what the Fairfield market wanted.”

On the 10-acre truck farm where he and Betty still live, Ernie has lovingly tended over 50 varieties of fruit trees, plus a one-acre garden and some berry patches. He grows his own horseradish and until recently sold 700 pints of horseradish pickles and hundreds of gallons of home-pressed cider each year.

The last time we chatted, Ernie mentioned that he and Betty were about to celebrate their 70th anniversary. And, oh yeah, he let it drop that over the years he and Betty took in 30 foster children—yes, that’s 30—and adopted six of them.

I want to know more about this side of Ernie Hinkle, but when I return to the market the following week, he’s gone.

Soon I’m on the phone with Dennis Ives, a nephew of Ernie and Betty’s. Dennis tells me that, sadly, Ernie has taken a bad fall while picking plums. He will take a while to heal from his injuries, and will need assistance that can only be given in a nursing home. 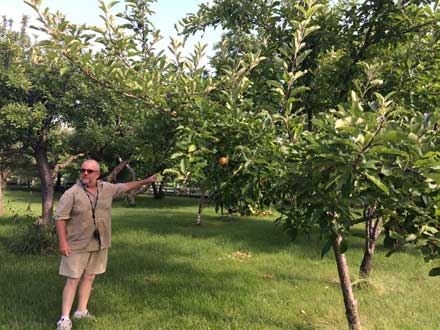 Dennis in the orchard of his family home in Birmingham. (Photo by Linda Egenes)

Dennis invites me to the family farm, where he and his wife are staying to help Ernie and Betty in this time of need. Other children have flown in as well, including the youngest child, April, and her husband, Dylan, who teach theater arts in Wales.

It’s easy to find Ernie and Betty’s Victorian farmhouse in Birmingham, surrounded by orchards, flower gardens, and a grape arbor. In a way it’s fitting, to be sitting with Betty and Dennis in the Hinkle kitchen with its bright yellow counters, hearing stories about this man who was the best storyteller of all.

“Ernie and I used to joke that when he came home each night he never knew how many children he had,” says Betty, who at age 90, has energy and brain power to spare.

“Social services would call up and say, ‘We have five boys—can you take them for one night?’ Then the ‘overnight’ lasted six months.” Those boys ranged in age from two to fifteen.

“Right after that we had a group of sisters come,” says Betty. “Only they arrived at three in the morning.”

Dennis says that his own mother (Ernie’s sister) died when Dennis was 5 and his brother was 7, and “Ernie and Betty took us in just like the others.”

Dennis was taught from a young age to welcome all of the children who came to stay. “Even the cats knew to come to the Hinkle household. There were always at least 10 stray cats that Ernie fed in addition to our own. If he saw a neighbor’s horse was underfed, he’d buy him hay.”

Dennis helped Ernie run the farm, rising at 4:30 a.m. to feed the animals before school. Tuesdays were candy nights, when Ernie would walk into the parlor and toss each child a candy bar. “We were eagerly waiting,” Dennis remembers.

Dennis was a smart kid, and Ernie and Betty sent him to College of the Ozarks in Branson, MO. “I was working with Ernie in the tire business, which helped him a great deal, but it was Ernie who told me, ‘You need to get your education.’ ” With Ernie and Betty’s support, Dennis went on to medical school. Today he manages hospitals in Arkansas.

“I owe my whole life to Ernie and Betty,” Dennis says. He means this literally. When Dennis came to the Hinkles, he had nephritis, a deadly kidney disease in the era before dialysis, and he wasn’t expected to live more than a year. Ernie rearranged his tire route so he could drive Dennis to the University of Iowa Hospital once a week for treatment. With the healthy food and lifestyle on the farm and an innovative medical treatment, Dennis eventually was cured by age 14. 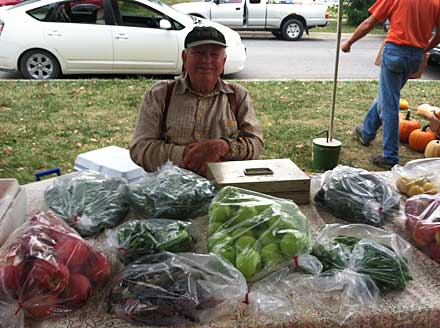 Ernie Hinkle was a regular fixture at the Fairfield Farmers Market. In the fall of 2013 his table was arrayed with apples, greens, and other produce from his farm. (Photo by Linda Egenes)

“Ernie and Betty are two of the most generous people that I know,” says Dennis. “They’ve always been there for anyone who needs anything. . .” Dennis stops, overcome with emotion.

Betty picks up the story. She tells about Leslie, a baby with Down syndrome they adopted and raised.

“When we adopted her, someone said, ‘How much closer could you get to heaven?’ ” says Betty. “So Ernie named  the farm ‘Leslie’s Little Bit of Heaven.’”

The cover of Ernie’s book lists his many roles: actor, auctioneer, beekeeper, emcee, gourmet, herdsman, journalist, lay preacher, politician, poet, horticulturalist, entertainer, musician, orchardist, truck driver, writer, loafer, water-witcher, Sunday-school teacher, salesman, and Santa. And that’s just half the list. Yet Ernie’s true legacy is the children he and Betty raised and the people he helped throughout his life.

When I drive away from Ernie and Betty’s orchards, my last glimpse is the sign “Leslie’s Little Bit of Heaven” in the rearview mirror. I remember something Ernie said last month at the farmers market that sums up his philosophy of life.

“I guess that’s what we’re all supposed to do, isn’t it?” he asked while removing his cap and slapping it back on his head. “Something in this world to help other people.”

Due to Ernie’s injuries, the Hinkle family sold the family farm in Birmingham in 2014. Ernie Hinkle passed away on February 4, 2017, age 92, in Mountain Home, Arkansas.

Linda Egenes is the author of five books and over 500 articles. Visit her Green and Healthy Inside Out blog at www.lindaegenes.com.

Good for What Ails You: Breathless | In Breathless, The Sexual Revolution Comes to a 1960s London Hospital