Next time you’re in line at the post office, ask the person next to you if they’ve got a tattoo. They might think you’re creepy, but if they are willing to talk to you after that, one in five of them will tell you they do indeed have a tat. One in five!

It’s clear that tattoos aren’t just for sailors, prisoners, and carnies anymore. They aren’t just for athletes and rockstars either. Although certain potential employers (or potential in-laws) might raise an eyebrow if you’ve got a tattoo visible, tattoos in the U.S. are quickly becoming no big deal. Unless you are the person getting the tattoo. Now that’s a big deal.

Being tattooed is probably not something you’d want to take lightly. They’re painful to get (say, how many times do you have to poke me with a needle?), they’re fairly expensive, and—depending on how much sun-baking you do—they eventually fade or blur, requiring maintenance to make them look right again. But perhaps the biggest consideration is permanence. Once you get a tattoo, it’s pretty much going with you to your grave, so you’d better be pretty dang sure about it. (The blobby, smudgy shamrock with devil’s horns on my former roommate’s bicep comes to mind.)

As a commitment-phobe who struggles with decisions as simple as ordering off a menu, I’m an unlikely candidate for getting permanently inked. Especially after having seen some fairly horrendous tattoos—likely done by artists who shouldn’t have been allowed to hold a needle. That said, I’ve seen some really beautiful ones too, that, even with my limited knowledge of the art, I’m sure took an insane amount of skill.

If you live in southeast Iowa and have decided in favor of getting some body art done by people who do know what they’re doing, you’re in luck. Pure Imagination, located right off the town square in Fairfield, is home to a couple of tattoo artists, one of whom I had the pleasure of sharing coffee with. Joseph Ware, one of the owners, gave me the scoop on his shop. 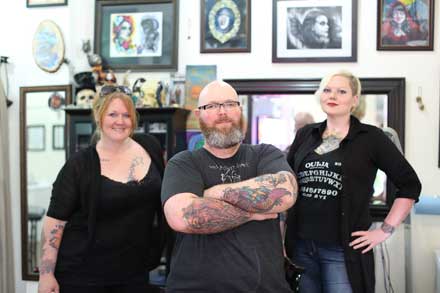 Hailing from Fort Worth, Texas, Joe has over 15 years of experience in the industry. He was barely into his teens when knew that he “wanted to be tattooed,” but it wasn’t until long after his college years that he convinced the Tattoo Shop of Fort Worth to let him learn the trade.

When his apprenticeship was over, he moved on to work at several parlors, including one in Dallas, where he worked alongside a well-known artist named Tigger. The studio was conveniently/inconveniently located next to a gentleman’s club. (I can only imagine the clientele that stumbled into that shop in the wee hours.)

Joe grinned as he told me, “One of my favorite phrases is, ‘You’re not a true tattoo artist unless you’ve seen a tattoo shop sunrise.’ ” He certainly earned his stripes in Dallas, often coming in to work around noon and tattooing until 8 a.m. “Oh, I did everything from skulls and tribals to Cherry Creek flash [a famous brand of tattoo menu art] to pin-ups to comic book . . . all kinds of stuff . . . a lot of flames.”

Joe explained that his experience in the “seedier realms of tattooing” was the catalyst to take his studio in a different direction. “You can only work in an environment with no structure for so long.”

Joe moved to Mount Pleasant in 2003 to help a friend get a shop going there. Once that was accomplished, rather than return to Texas, he decided it was time to open his own studio. “Here we are many years later,” he said.

The Mount Pleasant experience, though challenging, bore unexpected fruit: he met Bridget Turnmire there, a BFA graduate of MUM, who came to the studio one day to apply for an apprenticeship. She had one of the best, most professional-looking portfolios Joe had ever seen. They’re married now, they run the shop together, and have a beautiful daughter. Pure Imagination is indeed a family operation.

Their Fairfield location—which has an impressively diverse image archive—has been open for about three years. “We use a lot of the visual vocabulary of the more traditional [vintage] tattooing, but we also do some of the more modern techniques of blending and layering,” Joe explained. “I try to keep it accessible for many tastes.” A reputation for quality, cleanliness (we’re talking hospital-grade sterilization), and artistry earns them a lot of new and returning clients.

In a town that is uber liberal in some ways, but surprisingly conservative in others, I was curious to know who, exactly, his clients are. “Just a mix of everybody,” he said. “We get doctors, nurses, we’ve got attorneys, manufacturing plant workers, construction workers, M.U.M. kids . . . very eclectic.”

Being somewhat of a tattoo ignoramus, I asked Joe about the origins of tattooing. He chuckled, “We could do a day-long interview just on that.” He did give me some gems, though. For instance, did you know that Thomas Edison’s invention of an electric duplication pen, later modified and patented by Samuel O’Reilly, became the basis for today’s tattoo machine? “And then you have the tribal tattoos of, say, the Maori. A lot of that was hand-poke, or done with bone and stick.” (I don’t know if that sounds better or worse than an electric needle.)

Instruments aside, I hadn’t realized how extensively tattoos have played a role in ritual and tradition the world over. In Borneo, women tattooed symbols on their forearms indicating their particular skills, making them more desirable as mates. The Romans marked their criminals and slaves. In the west, early Britons tattooed their family crests. Interestingly, the Japanese—originators of the elaborate, flowing “body suits”—were among the first to use tattooing as an aesthetic art form.

It’s fascinating stuff, but I’m still left with one burning question. What is so appealing about permanently marking the skin that a fifth of American adults do it? The more I ask around, I’m discovering that the reasons are different for everyone.

For some, the pain itself is part of the appeal. “Oh, absolutely,” Joe agreed. “There is something very cathartic about getting tattooed. It’s a bit of a release, physically, emotionally.” He makes another point I hadn’t yet considered. “You’re indelibly, permanently changing something on your body. And yes, there are ways to lighten or fade tattoos these days, but you can’t really take away the fact that you got tattooed.” It’s sounding more and more like a rite of passage—one you get to choose for yourself.

Whether this rite of passage was well-planned or spur-of-the-moment, personal aesthetic appeal is still the strongest factor (i.e., some tattoos “just look cool”). But if you think like I do, a cool tattoo is one that comes with a cool story.

Last week while I was wrestling with my thoughts on the topic, I had lunch with my new friend, Nicole. We had originally bonded over cats, but what I observed about Nicole is that she possesses that mysterious gene that somehow I missed out on: self-discipline. She eats well. She goes to bed early. She is not addicted to her cell phone. She sat gracefully across from me in her white cardigan as I queried with my mouth full of potatoes, “Why do you think people get tattoos?” I admit, my jaw hung open a little when she told me she had one. To spare her the sight of my ABC potatoes, I shut my mouth and swallowed. “Will you tell me about it?” Nicole said she was the last person on earth she thought would ever get a tattoo, but when her brother died at the age of 21, it was her way of honoring his life and cherishing their closeness. Even though they were very different, Nicole and her brother had been peas in a pod. “We were opposites, but we just fit.” The tattoo she chose was a yin-yang symbol, made from the shapes of two cats: one black, one white. I didn’t ask to see it. I didn’t need to. This was something she wore for herself and her brother. I love that.

Unlike Nicole’s tattoo, some body art is definitely designed for public consumption. In the 1920s, American tattooing was used as a travel souvenir; you could tell where a person had been by looking at their tats. This is still the case to some extent—Joe himself has a yellow rose, a cactus, and a Texas flag prominently positioned on his “sleeve.”

While stories of where they have been (on the map) still resonate for tattoo wearers, it’s just as common to see tattoos that tell stories of the spirit. Joe showed me the sketch for a tattoo he designed for his wife: a giant, swooping owl with keen eyes, its wings spread wide enough to span her upper chest. It’s an arresting image, but why this particular bird of prey, I wondered. And why important enough to wear it over her heart? Joe filled me in. “Once as a child, Bridget reached to pull an apple off a branch and found herself face to face with an owl.” This being just one of many owl encounters she has had throughout her life, she relates to this bird as her spirit guide. She now (literally) embodies its intuition, keen observation, and wisdom.

Tattoos are stories about where we’ve been, who we’ve been, what we love, and what we want to claim about ourselves. We are fierce. We are learning. We hold on hard. We live lightly. We are one of a kind.

Pardon me while I go design my first tattoo.

My Life with Kindle