ILenka Lichtenberg embraces the different musics of the world. She incorporates into her compositions the Czech folk tunes she grew up with, classical material she studied at the Music Conservatory in Prague, jazz she learned as a nightclub singer in Denmark, ethnomusicology she assimilated at universities in British Columbia and Toronto in Canada, Yiddish sounds she discovered in Israel, gypsy music of the Roma people, Brazilian arrangements, various Middle Eastern styles, and spiritual Indian tunes she discovered while exploring different cultures.

She does not like the term “world music,” however. “It’s a very unfortunate label,” she says. Critics frequently employ the expression to describe a type of bland, generic music that bears little resemblance to the original source cultures. “I am hoping that is not the case with my music. I am definitely a ‘combiner’—for me, it is simply an authentic reflection of contemporary musical reality that various cultures influence each other and step into each other’s sounds and practices. . . . We live here all together and the music behaves naturally this way. In fact, historically, it always did!”

Lichtenberg is coming to Iowa as part of a tour, which includes cities such as Minneapolis, New York, Chicago, Los Angeles, Berkeley, and Seattle as part of her plan to conquer America. While she has played in the U.S. before, this tour is meant to present her music in a more significant way. She will be playing three shows, two at CSPS in Cedar Rapids on November 4 and 5, and one at the Washington in Burlington on November 13.

She will be traveling with her band, Fray (which means “free” in Yiddish) as part of her Embrace tour. Fray includes Alan Hetherington on pandeiro, cajon, drums, percussion, and vocals; Chris Gartner on fretless bass; Ravi Naimpally on tabla and darbuka; Demetri Petsalakis on oud, guitars (electric and acoustic), and lyra; and Lenka on vocals, harmonium, guitar, keys, and recorder. 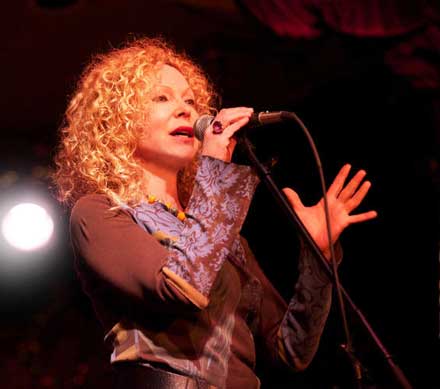 The quintet will perform two completely different sets at CSPS. The first night focuses on Lichtenberg’s project “Songs for the Breathing Walls.” She explains, “This is liturgy—sacred music—in Hebrew . . .  intimate, soulful, and uplifting music. The second night, November 5th, will be all about Fray and our more typical repertoire. . . . This is a more energetic setlist full of intriguing rhythms and instrumental interplay, and mostly original songs that, as a whole, are  meant to say ‘one world.’ ” The Burlington concert will be much the same as the second Cedar Rapids show.

Apart from being a busy recording artist, musician, and mother of three,  Lichtenberg is also an activist in animal rights and environmental causes. “I also happen to be a good cook of vegetarian cuisine and for sure will publish a cookbook one day!” she said. “I am at peace with my life, albeit a bit incredulous how it’s turned out.” She ceaselessly does her best to make the planet a better place.

Lichtenberg attributes her relentless activity to two things: her childhood and her family history. As the only child of parents who divorced when she was six, she spent a lot of time alone. “It forced me to be creative—making up my own games, and playing ball, even tennis, by myself. It has made me quite incredibly independent and strong.”

Her sense of social justice comes from a different place. Her Czech mother’s family died in the Holocaust. “I also have a full repertoire of Holocaust material, and these are always songs that make my heart cry,” Lichtenberg says. “Learning that my family perished in the Holocaust has really determined my adult direction altogether; I felt the need to counter that through music somehow. I think I feel such strong desire to reach out and interact with other cultures precisely because of the Holocaust, as I see that only accepting and loving each other’s differences and cultures will help prevent future tragedies of that kind.”

Lichtenberg says the lesson of the Holocaust is clear. “Evil happens when good people do nothing. . . . We need to pay attention, be engaged, care for those in need.”

While Lichtenberg has never been to Iowa, she looks forward to the extra time she gets to spend here. “I learned that there are some pretty deep Czech roots in this area, and there is a Czech and Slovak museum of history—how fascinating is that! I simply cannot wait to go and explore—I have never heard of any other such place outside Czech Republic. I am hoping to connect a little bit also with the Czech and Slovak community and see if anybody understands any of my Czech and Slovak songs!” If so, Lichtenberg will be sure to give him or her an embrace.