For the last few years, 26-year-old Iowa City-based artist and teacher Ryan Bentzinger has been working on a graphic novel about a post-apocalyptic sci-fi world. His solo exhibition at the Cedar Rapids Museum of Art (CRMA) presents 74 of the 197 recently completed watercolor paintings comprising his book, nAMUH (“human” spelled backwards).

Starring robots and monsters on a quest to rescue lost children, nAMUH is a stunningly rendered dystopian narrative, with beautiful, deadly acid rain and islands of trash. “Normal” humans no longer exist—the world is populated by robots, cyborgs, and animalistic mutants, who fight to survive in a world transformed by pollution.  Bentzinger’s solo show is part of the CRMA’s current exhibition, Out of This World: Science Fiction and Fantasy Art. The first of its kind, the exhibition celebrates the 40th anniversary of ICON, Iowa’s longest running annual science fiction convention, held last month in Cedar Rapids. nAMUH will be at CRMA through January 17, 2016. 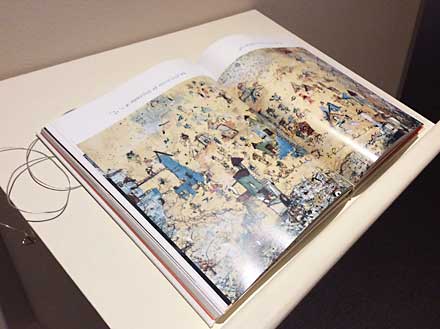 Bentzinger fell into his graphic novel project as way to find a creative focus. “I was tired of sitting at the drawing table every day wondering what I should draw,” he says. “I felt if I created the characters and the story, there wasn’t that dilemma anymore.” Bentzinger’s former professor and one of his artistic mentors, Chunghi Choo, was impressed by the sci-fi watercolors. She convinced Bentzinger to show them to CRMA Executive Director Sean Ulmer. This interest spurred Bentzinger to dedicate serious time towards nAMUH.

His pieces are created initially with graphite on cotton paper. Then he inks or outlines with a micron pen. Finally, he splashes some acrylic ink down or uses a watercolor crayon to add color. For the robots and anything else metallic, he adds mica powder to the acrylics. He prefers acrylic inks to regular watercolors for their vibrancy and reticulation ability.

Partway through his three-year creation process, Bentzinger was awarded a residency in Rome. He spent eight weeks intensively studying watercolor techniques. He felt the trip revitalized him and added new depth to his work. 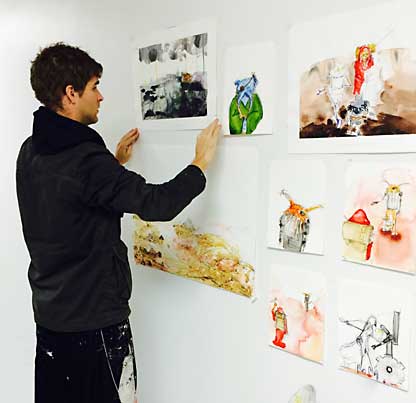 Betzinger embraces mistakes, trusting the medium to guide the story. A crooked line could be an entry point for world building or could be used to suggest motion. “It’s marks like that that help guide the story,” he says. “That’s what I tell my students, too. Give the medium 50 percent power, have 50 percent yourself. If you try to be a power hog with art or writing, it just doesn’t work out. You have to make mistakes—the mistakes are what make things real.” 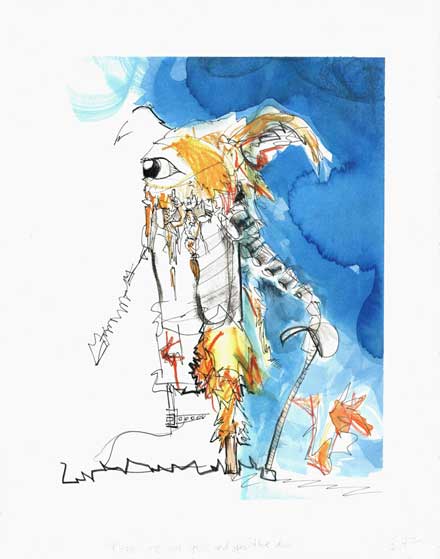 Please save your spells and open the door, 2012, from Ryan Bentzinger’s nAMUH.

All the dialogue is handwritten, which adds a sense of continuity and makes the dialogue a part of the art. Bentzinger’s pieces have a strong gestural quality, as if the characters are emerging from their own motion. “This is not a traditional graphic novel at all,” he says. “It’s very loose. I tried hard to be honest and just keep the paintings fresh. I think that’s the strength in this work, the spontaneity. I’m sure a real traditionalist graphic novel artist wouldn’t call this a graphic novel. My friend Tony actually called it a fine art novel.” 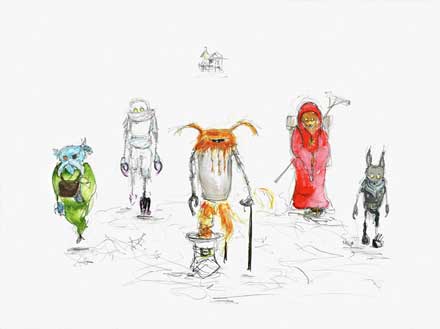 Exit scene of the new fellowship, 2015, from Ryan Bentzinger’s nAMUH.

Bentzinger says he never got bored because he planned out his chapters the same way he’d develop a lesson plan or a Dungeons and Dragons campaign. He was very careful to keep a sense of believable reality in his paintings and not do anything too far-fetched, too outside the realm of possibility. He was especially careful choreographing the fight scenes to make them believably exciting without being cheesy.

Bentzinger would love to find an animator to work with. The nAMUH story will eventually include five books, and he feels the story lends itself to animation. “I’ve always felt this should have been an animation to begin with. In my head, I see it moving, but at the same time, I’m glad I drew it because I love drawing.” 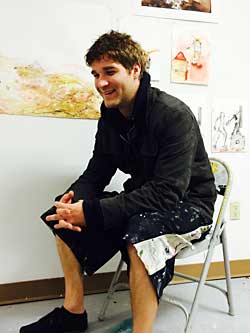 Ryan Bentzinger in his studio.

Whether an animator comes forth or not, Bentzinger is looking forward to spending more time with his characters. “This is my medium to communicate,” he says. “I tell my students, this is what I was doing at seven, eight, nine years old. What you’re doing now is important. What you’re drawing now and interested in now can apply to your adult lives. If you take it seriously, if it means a lot to you, then go with it.”

Bentzinger is self-publishing the first book, slated for printing in the winter of 2016–17. He’s currently taking pre-orders to help fund the publication of a 260-page 9" by 12" hardcover book with full-color bleed images. You may order directly from him at ryanbentzinger@hotmail.com or at ryanbentzinger.com.