Daughter of Celtic music legend Tim Britton, Mirabai cultivated her creativity from a home full of music while growing up first in Fairfield, and then in northern California and Oregon. She wrote the songs between ages 16 and 17 and recorded shortly thereafter. It took another three years to craft the final tracks in Tim Britton’s Fairfield recording studio with the assistance of local drummer David Hurlin, as well as childhood friend Merrick Winter (electric guitar) and two cellists, Monique Ross and Erik Levins, who passed through town. Tim contributes wooden flute, mandolin, percussion, organ, and backing vocals. 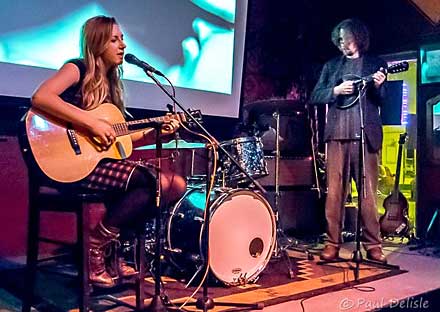 Mirabai paints sonic images around lyrical themes of a young lady experiencing love, light, and life. At a recent concert, Mirabai showed that she is a disciplined guitar player with precise finger placement and clean transitions between chords, thereby avoiding the squeaky slides generated by less careful guitarists.

She also demonstrated a flair for well-crafted lyrics and highly expressive vocal nuance. As I listened, Mirabai’s singing reminded me of Danish singer Tina Dico (former lead with Zero 7) and UK’s Dido, both of whom exude hauntingly beautiful lyrics and melodies. 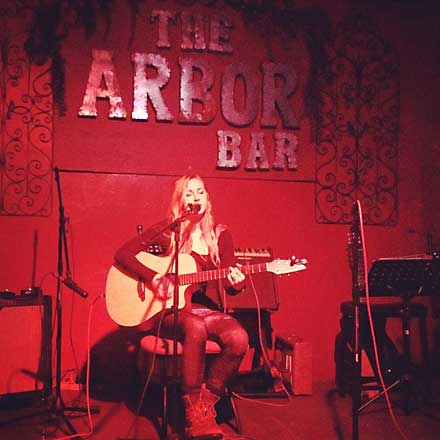 Mirabai Britton at the Arbor Bar in Fairfield.

At the Fairfield concert, Tim Britton’s accompaniment on mandolin provided what he calls “a rolling filigree,” i.e., a continuous ornamental backdrop reminiscent of what is sometimes done in Irish music. This filigree also became an important element amongst the layered instrumentation and vocal harmonies of the recorded arrangements. Tim’s Hofner bass playing adds a similar lyrical quality not unlike that of Paul McCartney, who inspired him.

From such a splendid CD, it was challenging to select favorites. Nevertheless, here’s my list of tracks with sample lyrics, each chosen for some special quality.

She has a heart of gold
a soul so old
she’s wise beyond her years
Whenever she’s around
I know I’m found
she wipes away my tears.

After Mirabai expressed her desire for wind chimes, Tim found a single large chime at the house of a friend that magically turned out to be in the perfect key for the song.

• “Shoes to Borrow” begins instrumentally like a downtempo Cure track, telling the story of a young person adjusting to growing up and looking ahead to better days:

I’m dreaming of tomorrow
And what will follow
Let the walls come crashing down
I need some shoes to borrow
To numb this sorrow
Try and turn this ship around.

• “Drifting Colors” sounds like a song that could have been written by Tina Dico. Tossing her thoughts out to sea, Mirabai realizes that

sometimes the sun forgets to shine
But I know that’s just fine
the rain must fall at times
for lovely things to grow.

• “Diamonds in the Frost,” one of Mirabai’s favorite compositions, is enriched by cello, backing harmonies, and Tim’s brushes on bodhran, an Irish goatskin drum.

Mirabai’s 11-song disc beckons for your attention. It is available through the usual sources or can be ordered directly by emailing piedpiperproductions@yahoo .com. A second album is in the works for a late 2016 release.

Mirabai is a rising star burning brightly. Let her light illumine your life.