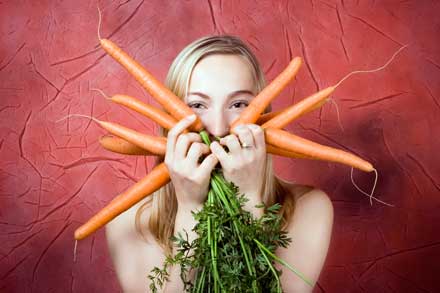 Refining your palate is a way to recognize and enjoy proper amounts of food.

One of the defining moments in my life revolves around eating a carrot. I know, a carrot. It was summer 2004 and I was in my garden. The carrot was a Royal Chantenay. It was young, but I was impatient to enjoy the fruits of my first gardening venture. That carrot was so sweet, so crisp, and so far removed from the carrots of my youth (which I remembered as slimy, yellowish mush I stuffed into my milk carton to escape eating) that it changed my life. My reaction to that bite of carrot was elemental—it was pure joy. Food never tasted the same again.

Before that carrot, I used to think of the palate as this thing over which food critics doted and no one else cared about. But as I ate from my garden and began to pick out new flavors in food, as I tasted the silky, creamy dream that is a Hawaiian avocado picked off the tree, the tangy illuminating bite that is ginger root dug from the field, and the light, clean flavor that is the hallmark of pasture-raised chicken, I began to wonder about the palate, why it is what it is, and why mine was changing.

So I looked into it. The palate is defined as a person’s appreciation of flavor. Foodies often describe it as the ability to identify the ingredients and techniques used to create a dish. Restaurants and chefs liken it to their brand, to the identity of their food.

One writer described it in a way that especially resonated with me: as the memory of taste. I liked this description because as I began to eat more and more real foods—foods raised in their optimal natural environment, harvested only when ready, and consumed unprocessed at their source—I felt like I was rediscovering a long-lost memory of how food should taste.

A Taste of Science

The palate relies on the sense of taste, which in science terminology is the body’s ability to detect environmental stimuli known as tastants. The body does this via chemoreceptors, a type of receptor cell that detects chemicals. The taste receptor cells are bundled together inside papillae (bumps) on the tongue, which we all know as taste buds. When a taste receptor cell comes into contact with a tastant molecule, it sends an electrical signal to the brain, and the brain says, “Hey, that’s chocolate!”

Well, not really. Taste receptor signaling is just the beginning of taste. The sense of smell, which involves detecting environmental stimuli known as odorants, plays a heavy role in flavor perception. That’s why it’s difficult to taste food when your nose is stuffed. At the same time taste receptors are relaying messages to the brain, olfactory receptors are sending up their own signals. The brain is also receiving information about the texture, temperature, and appearance of the food as well as pulling up relevant psychological information, such as past memories associated with the food. So there’s a lot that goes into taste perception.

What all this means is that the sense of taste—the palate—is mutable. It’s developed through life experience (beginning even before we’re born), changes over time, and varies among people. And it’s a sense that we can work on, a sense we can sharpen.

All right, then. So how do we sharpen?

And I don’t mean this in the sense of what you eat—I mean this in the sense of how you eat. These days, eating is all about convenience. But when we eat quickly and distractedly, like when we’re driving in our car, we don’t really taste food. We’re just not paying attention to what’s going on in our mouth. The taste experience is not there. So eat right! Sit down, eat mindfully, and make the meal last.

Speaking of lifestyle, here are a few other tips for optimizing your ability to taste: drink lots of water, definitely don’t smoke, and save the heavy drinking until after dinner. Dry mouth, cigarettes, and high blood-alcohol levels all interfere with taste signaling.

Processed foods are not a friend of the palate. They’re heavy on the salt and sugar, both of which are highly stimulating tastants. Our bodies are behind the times in the sense that they are adapted to a world in which salt and sugar were scarce (the world that existed until about 100 years ago). Thus, in this day of processed food, it’s easy to consume more salt and sugar than the body is designed to handle. Doing so overstimulates the taste buds and makes it difficult to discern other flavors. It can also kill your appreciation for the natural flavors in real whole foods.

Whoops! At this point there’s nothing to do but reset the taste buds. You can do this by cleansing your diet of salt and sugar. Cut way down on both. It won’t be easy, and it will take about a month to recalibrate. But eventually other tastes will come to life and you’ll discover sweetness in unexpected places, such as caramelized Brussels sprouts. Now you’re tasting!

It’s time to get to the heart of the well-developed palate. It’s time to eat real food, meaning foods raised in their optimal natural environment, harvested only when ready, and eaten at their source (or at least in season!).

How a food is raised makes a huge difference in how it tastes. The out-of-season tomato grown in poor soil, bred for appearance, picked green, and hauled a thousand miles across the country is no competition for the ripe Italian heirloom tomato picked off the vine in your backyard garden. I’m not saying to never again eat a crap tomato. But I am saying to choose real whole foods as much as possible.

Food is an adventure. Try everything at least once. Whenever you come into contact with a new food, don’t hesitate. Eat it. When at a restaurant, order the unfamiliar dish. Attend events that have “Taste of” or “Tasting” in their names. When vacationing, visit the produce markets and ask the locals to point out the most popular item on their tables. Buy it. Experiment with different herbs and spices, especially those from other cultures. Through eating you can bring the world to your table.

Jocelyn Engman (along with her husband Tim) is the proprietor of Pickle Creek Herbal in Brighton, Iowa. The family herb farm grows and harvests organic herbs for their own infused oils, vinegars, jellies, teas, soaps, salves, and lip balms.

Cub Scouts of the Infinite